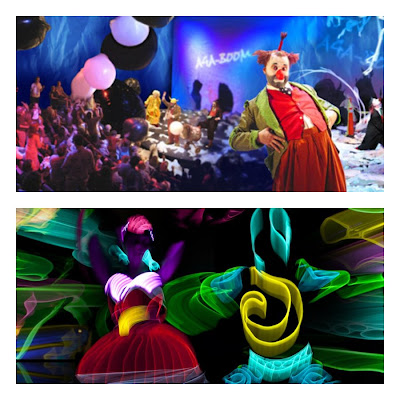 “In addition to our world-class coasters, Six Flags Over Texas prides itself on offering well-rounded, high-quality entertainment experiences for our guests,” said Steve Martindale, park president. “iLuminate andAGA-BOOM are exceptional and unique performances, and we anticipate having a packed house in our entertainment venues during the run of these shows.”

iLuminate combines state-of-the-art light up costumes with 12 electrifying entertainers who perform in the dark to create the ultimate performing arts experience. The concept for iLuminate emerged while Miral Kotb, owner and creator of the ground-breaking technology, was developing mobile phone applications. She had a vision of dancers wearing costumes that illuminated wirelessly to complement the music and choreography; wireless technology that could be controlled from the palm of one’s hand.

“We are thrilled about this incredible opportunity that catapults iLuminate into the theme park venue,” stated Kotb. “Six Flags Over Texas is the perfect showcase for our performances and we are looking forward to the debut of this imaginative new show for audiences of all ages.”

AGA-BOOM, known for wowing and delighting audiences around the world, is also making its Six Flags Over Texas debut. This delightful production breaks through the barriers of language and culture with physical comedy, high energy stunts, and audience interaction.

“Our goal is to provide pure family fun, and we have mastered the use of some the simplest tools: humor, comedy, and lots of toilet paper, to achieve this,” said Dimitri Bogatirev, owner and creator of AGA-BOOM. “We are glad to bring our award-winning production to Six Flags Over Texas and are prepared to have guests doubled over with laughter as we ‘clown’ around for a good laugh.”

iLuminate and AGA-BOOM are two of eight shows that will make up the park’s summer show package. Several blockbuster concerts are also on tap, including The Wanted, Cobra Starship, and Chris Young. Additional show and concert information can be found at sixflags.com/overtexas.


About iLuminate
iLuminate is an entertainment technology company that combines state-of-the-art technology with electrifying entertainers dancing in the dark to create the ultimate performing arts experience. Founded by dancer and software engineer Miral Kotb, iLuminate enables performers, choreographers, technicians and artistic directors to produce explosive performances with customized wireless lighting programs. The results are extraordinary effects choreographed with phenomenal dance moves that take viewers on an exhilarating ride. Since launching in 2009, iLuminate’s patent-pending technology has been used in numerous performances by Grammy-winning superstars such as Chris Brown, Christina Aguilera and The Black Eyed Peas. For additional information, visit www.iluminate.com.


About AGA-BOOM
AGA-BOOM is rooted in the unique European theatrical style and universal language of clowning. It cuts through the barriers of language and culture with the art of slapstick, the humor of physical comedy and the delighted excitement of childhood. AGA-BOOM is an interactive mayhem that carries audiences to the other side of the funhouse mirror, with outrageous zaniness and unrestrained laughter. Created by veteran of Cirque Du Soleil Dimitri Bogatirev, AGA-BOOM was nominated for the Ovation Award, in the category of best touring show, along with The Producers, 42nd Street, Lily Tomlin and Elaine Stritch. AGA-BOOM had successful engagements on Broadway, Las Vegas, San Francisco, Boston, and Los Angeles. It was highly critically acclaimed from coast to coast. The show has thrilled and delighted audiences around the world, performing for more than 500,000 people in Canada, Japan, Mexico, Korea, Singapore, Russia,Chile and the United Arab Emirates.