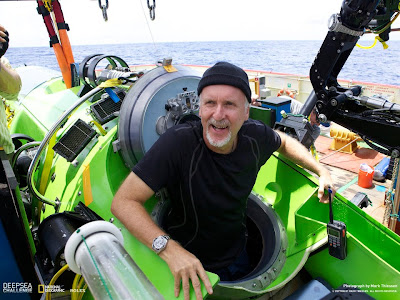 On March 26th of this year, Cameron made history by descending 35,756 feet (6.77 miles/10.89 km) to reach the “Challenger Deep,” the planet’s deepest point, located in the Mariana Trench, in his specially designed, single-pilot submersible DEEPSEA CHALLENGER. The dive was part of DEEPSEA CHALLENGE, a joint scientific expedition by Cameron, National Geographic and Rolex to conduct deep-ocean research and exploration. The DEEPSEA CHALLENGE expedition was chronicled for a 3D documentary feature and giant screen film for theatrical release. More information on the expedition is available at www.deepseachallenge.com

Cameron last addressed the association’s conference delegates in 2004 at the Montreal Science Centre, where he introduced a preview of his 2005 giant screen film Aliens of the Deep. Cameron also produced the giant screen documentary Ghosts of the Abyss, which was released in 2003.

The annual GSCA conference will feature new films and films in production, with screenings in both 15-perf/70mm and digital; projects in development; professional development sessions; a technical session to discuss developments in image capture, projection, and sound; a trade show; and the GSCA Achievement Awards, which recognize excellence in giant screen filmmaking, marketing, and lifelong learning. GSCA anticipates that over 400 delegates will attend this year’s conference. Filmmakers, distributors, theaters/exhibitors, manufacturers, and suppliers from around the world who are involved in the giant screen cinema industry will participate. For more information and frequent updates on the GSCA International Conference, please visit giantscreencinema.com.

WEEKEND VIEWING: The NBA on IPM