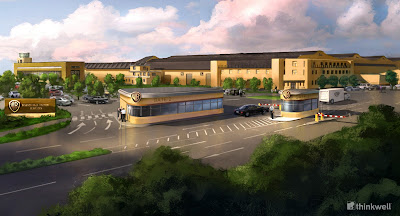 Burbank, California, USA – On the heels of Warner Bros.’ recent announcement of its acquisition and in excess of £100 million planned redevelopment of Warner Bros. Studios Leavesden, Thinkwell Group, a full-service experiential design and development firm, today announced its involvement in the project, designing and producing a one-of-a-kind behind the scenes look at the Harry Potter movie series, which will, by prior booking, give the general public the ability to tour several of the original Harry Potter film sets at the studio where all eight movies were produced. There, guests will have the opportunity to see many of the iconic sets, costumes, creatures and props, and witness the exceptional creativity and craftsmanship that went into bringing the film series to life.
About Warner Bros. Entertainment Inc.
Warner Bros Entertainment Inc. is a fully integrated broad-based entertainment company and a global leader in the creation, production, distribution, licensing, and marketing of all forms of entertainment and their related businesses, across all current and emerging media and platforms. A Time Warner Company, Warner Bros. Entertainment stands at the forefront of every aspect of the entertainment industry from feature films to television, home entertainment/DVD, animation, product and brand licensing, and interactive entertainment.
About Thinkwell Group
Founded in 2001, Thinkwell is a full-service experiential design and development firm that collaborates with its clients to envision, strategize and create immersive, one-of-a-kind guest experiences. Thinkwell develops and produces attractions, master plans, brand experiences, exhibits, live shows, environments, multimedia and digital integration. The company has become a leader in experiential design by bringing a unique holistic approach to every creative engagement, delivering extraordinary results to notable clients over the years, including Fortune 500 companies, studios, museums, theme parks and destination resorts. The multi- disciplinary company is comprised of the following core areas of expertise: Thinkwell Design and Production, Thinkwell Development, Thinkwell Project Management and Studio Thinkwell.

Judith Rubin
Judith Rubin ([email protected]) is a leading journalist, publicist, strategist, blogger, content marketing specialist and connector in the international attractions industry. She excels at writing about all aspects of design and technical design, production and project management. Areas of special interest include AV integration and show control, lighting design and acoustics, specialty cinema, digital video and world’s fairs. Judith has ties to numerous industry organizations. From 2005-2020 she ran communications, publications and social media for the Themed Entertainment Association (TEA). In 2013, she was honored with the TEA Service Award. She was development director of IMERSA, and co-chair of the 2014 IMERSA Summit. She was publicist for the Large Format Cinema Association in the 1990s, now part of the Giant Screen Cinema Association (GSCA) and has also contributed to the publications of PLASA, IAAPA and the International Planetarium Society. Already making her mark as a magazine and book editor, Judith joined World’s Fair magazine in 1987, which introduced her to the attractions industry. Launching as a freelancer in the mid 1990s she has contributed to dozens of publications and media outlets including Funworld, Lighting&Sound America, Sound & Communications, Urban Land, The Raconteur and The Planetarian. She joined InPark in 2010. Judith earned a Bachelor of Fine Arts from Pratt Institute. She has lived in New York City and the San Francisco Bay Area, and now makes her home in Saint Louis, where she is active in the local arts and theater community.
Share
Facebook
Twitter
Linkedin
Email
Print
WhatsApp
Pinterest
ReddIt
Tumblr
Previous articleWarner Bros. Acquires Leavesden Studios And Unveils Plans For Major UK Production Base
Next articleNational Geographic’s Star Clock BC – the Antikythera Mechanism and Mad Systems