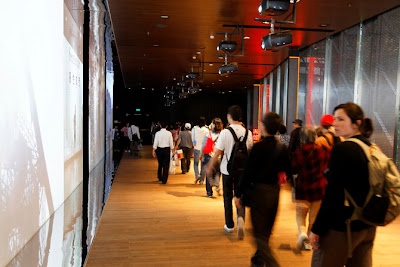 Fredrikstad, Norway – In one of the largest single implementations of its technology yet seen anywhere in the world, Norway’s projectiondesign® has supplied some 80 of its F32 series DLP® projectors for use in the French Pavilion at the Shanghai World Expo 2010.

The task of implementing the AV systems at the Pavilion fell to the Paris office of ETC, which has specialised in the design and automation of large-scale image projection since its formation in 1981. ETC’s joint project managers David Baillot and Nicolas Paineau worked on-site to ensure the smooth installation of the AV systems after the company was awarded the tender to supply and operate the multimedia equipment by the Pavilion’s state-backed organizing body COFRES. The project was designed by world-famous French architect, Jacques Ferrier.

“At this expo, the projectors are arranged in pairs or in fours, depending on the size of the screen being used,” Baillot explains. “The theme of the Pavilion is ‘The Sensual City’ and the idea is that visitors to the Pavilion experience some of the sights, sounds, touch and smells that give France its unique style, panache, and sense of glamour. Multimedia technology plays a key role here, as each screen shows content from a different region of France, giving visitors an insight into what makes that region special.”

The original film content was shot and delivered specifically for the Pavilion by Flair Productions, then specially formatted for the projection systems by the Paris-based company Cadmos. The projectors and content are programmed using ETC’s proprietary multimedia control platform Onlyview, while the AV installation as a whole is under the direction of Medialon Manager V5 control software.

“The high-quality, wide-angle lenses supplied with the F32, together with the model’s extensive vertical and horizontal offset capabilities, were key reasons to choose projectiondesign for the Pavilion,” says Paineau, who adds significantly: “Beyond the hardware’s technical capabilities, it is also vital on such a large-scale project to have the right backup, and projectiondesign’s ability to react quickly and offer support during the three-and-a-half months of installation was top-notch and absolutely vital to the job’s success.”

Thierry Ollivier, Regional Manager, France, Russia, CEE & CIS of projectiondesign concludes: “As a Frenchman myself I am very proud of what my countrymen have achieved with the Pavilion in Shanghai, but as a projectiondesign employee I’m even more proud to see so many of our projectors offering such clarity and consistency of imaging, day after day, in very demanding conditions. Like all events of this kind, the Shanghai World Expo has been a high-pressure project, and I’m glad to say that both ourselves and ETC have risen to the occasion to provide a perfect visual solution to the Pavilion’s needs.”

About projectiondesign
projectiondesign is a Norwegian company that designs, manufactures and markets a range of high performance projectors for professional, business and consumer applications. Amongst its core markets are high resolution scientific visualization, visual training and simulation, medical imaging, broadcast and post production, public media and entertainment. projectiondesign is based in Fredrikstad, Norway, and has offices in Singapore, India, UAE, South Africa, Italy, Spain, Germany, Netherlands, and United Kingdom, as well as the United States.

Judith Rubin
Judith Rubin ([email protected]) is a leading journalist, publicist, strategist, blogger, content marketing specialist and connector in the international attractions industry. She excels at writing about all aspects of design and technical design, production and project management. Areas of special interest include AV integration and show control, lighting design and acoustics, specialty cinema, digital video and world’s fairs. Judith has ties to numerous industry organizations. From 2005-2020 she ran communications, publications and social media for the Themed Entertainment Association (TEA). In 2013, she was honored with the TEA Service Award. She was development director of IMERSA, and co-chair of the 2014 IMERSA Summit. She was publicist for the Large Format Cinema Association in the 1990s, now part of the Giant Screen Cinema Association (GSCA) and has also contributed to the publications of PLASA, IAAPA and the International Planetarium Society. Already making her mark as a magazine and book editor, Judith joined World’s Fair magazine in 1987, which introduced her to the attractions industry. Launching as a freelancer in the mid 1990s she has contributed to dozens of publications and media outlets including Funworld, Lighting&Sound America, Sound & Communications, Urban Land, The Raconteur and The Planetarian. She joined InPark in 2010. Judith earned a Bachelor of Fine Arts from Pratt Institute. She has lived in New York City and the San Francisco Bay Area, and now makes her home in Saint Louis, where she is active in the local arts and theater community.
Share
Facebook
Twitter
Linkedin
Email
Print
WhatsApp
Pinterest
ReddIt
Tumblr
Previous articleMeyer Sound, Kraftwerk, Threshold, Merlin and Marvel Superheroes 4D at Madame Tussauds
Next articleNew 4D theater at Land’s End Amusement Park relies on Harkness screen