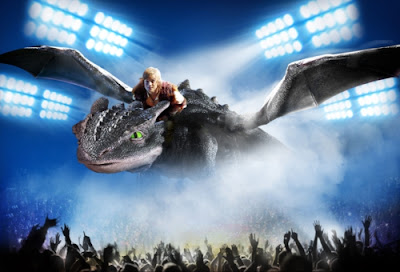 New York, NY, USA (May 10, 2012) /PRNewswire/ — This summer, audiences across North America will experience the magic of fire-breathing dragons that soar through arena skies in DREAMWORKS’ HOW TO TRAIN YOUR DRAGON LIVE SPECTACULAR. DreamWorks Animation SKG, Inc. (Nasdaq: DWA), Global Creatures and S2BN Entertainment today announced HOW TO TRAIN YOUR DRAGON LIVE SPECTACULAR will embark on a worldwide tour following its critically-acclaimed debut in Australia and New Zealand. The tour will be produced by RZO Dragon Productions to deliver 23 dragons, some with wingspans of up to 46 feet, Viking warriors and world-class circus artists and acrobats, to perform against a state-of-the-art, wall-to-floor immersive projection measuring more than 20,000 square feet.

HOW TO TRAIN YOUR DRAGON LIVE SPECTACULAR was created by DreamWorks Animation, producers of the Academy Award®-nominated film, How to Train Your Dragon, which grossed approximately $500 million at the worldwide box office and opened as the #1 film in over 30 countries and Global Creatures, the masterminds behind the international phenomenon Walking with Dinosaurs, the #1 grossing world tour of 2010. HOW TO TRAIN YOUR DRAGON LIVE SPECTACULAR’s worldwide tour is exclusively promoted by S2BN Entertainment and delivers some of the most ambitious theatrical technology to ever tour the arena.

The North American tour launches with a one-week engagement in Wilkes-Barre, PA, on June 27th. The tour schedule can be found at www.dreamworksdragonslive.com with tickets on sale to the general public beginning on Friday, May 11 . Ticket prices range from a low of $24.50 to a high of $89.50, with an average ticket price of $58.00. A limited number of premium seats and special VIP ticket experiences and family packages are also available.

The live production rolls fire-breathing action, epic adventure and heartfelt laughter into an original captivating story set in the mythical world of Vikings and wild dragons. Based on the book by Cressida Cowell, it centers on Hiccup, a Viking teenager who doesn’t fit in with his tribe’s longstanding tradition of heroic dragon slayers. Hiccup’s world is turned upside down when he encounters a dragon that challenges him and his fellow Vikings to see the world from an entirely different point of view. The story presents a vision so grand in scale that only DreamWorks Animation and Global Creatures could bringHow to Train Your Dragon to life in front of a live audience.

“In our film, audiences around the world were transported to the mythical world of Vikings and dragons… and now, we are excited to immerse them in a one-of-a-kind live event in HOW TO TRAIN YOUR DRAGON LIVE SPECTACULAR,” said Jeffrey Katzenberg, Chief Executive Officer of DreamWorks Animation. “The innovative team at Global Creatures and the creative storytellers at DreamWorks Animation have done an inspired job in every imaginable way to present this story on an unprecedented scale that will take global audiences to unforgettable new heights. We are happy to be working withMichael Cohl and his team at S2BN Entertainment to promote and take this show around the world.”

Global Creatures Chief Executive Officer Carmen Pavlovic added, “With DreamWorks we have forged a relationship with one of the world’s leading entertainment companies. The collaboration fuses our own world-class technology with the vision and dedication of a company renowned for its cutting-edge creativity and storytelling skill. We are excited to expand the boundaries of public expectation by creating a show that combines dynamic creatures, world class performers and incredible staging to not only thrill and intrigue, but to engage audiences on an emotional level as well.”

Michael Cohl is the founder and chairman of S2BN Entertainment, global promoter for HOW TO TRAIN YOUR DRAGON LIVE SPECTACULAR, and serves as lead producer of the Broadway’s smash hit Spider-Man: Turn Off the Dark. Cohl commented, “HOW TO TRAIN YOUR DRAGON LIVE SPECTACULAR is the next logical step for me after Spider-Man: to be back in arenas where I’ve always been, and where the most exciting things happen. We are thrilled to be setting a new gold standard for live family entertainment while utilizing the full scope and scale of the arena floor and fly space. The show delivers cutting-edge production values which tell an incredible story and create an unforgettable and magical experience. This show will mesmerize children and parents alike.”

Sponsored by HP, HOW TO TRAIN YOUR DRAGON LIVE SPECTACULAR is brought to life through state-of-the-art technology unlike anything ever seen before in a live event experience. Through DreamWorks Animation’s ongoing strategic relationship with HP, HP technology is part of the digital backbone for the production, providing family audiences across the globe with the most captivating live entertainment possible.

HOW TO TRAIN YOUR DRAGON LIVE SPECTACULAR breaks every rule of theatrical entertainment to fully immerse audiences into the show in ways that have not been attempted before. Barely contained within the arena, HOW TO TRAIN YOUR DRAGON LIVE SPECTACULAR utilizes the full venue, maximizing every dimension of the performance space to transport audiences into a mythical world of fire-breathing dragons who soar overhead at great speeds. The state-of-the-art animatronic technology and large-scale cinematic projections interact seamlessly with the live actors, who bring DreamWorks Animation’s heart-warming story to life through theatrical storytelling, martial arts and acrobatics.

Young Hollywood actor Riley Miner , an accomplished dancer and musical theater performer, will play the lead role of Hiccup. Joining Miner to share the role of Hiccup is Rarmian Newton, who won a Helpmann Award for his performance in the Australian production of Billy Elliot The Musical(2008). American stunt performer Gemma Nguyen , a third degree Black Belt and six-time world champion in Tae Kwon Do, plays Astrid. Sharing the role of Astrid is 19-year-old Queenslander Sarah McCreanor who has starred in her own comedic productions and performed in a range of musicals and comedy shows. Stalwart Australian actor Robert Morgan plays Stoick, Hiccup’s father and the rough and ready old-school chieftain of the brawny Viking tribe. American Will Watkins , an accomplished fencer, will star as Gobber; French Kung Fu champion and stuntman Godefroy Ryckewaert plays Snotlout and Texan hip-hop dancer and rapper Dexter Mayfield will play Fishlegs. Australian hip-hop and break-dancer Virackhaly Ngeth has been cast as Ruffnut and Sydney break-dancer Frace Luke Mercado, a founding member of SKB (Street Kulture Breakers), as Tuffnut.

The cast of performers is assisted by an international technical team who has collectively created many of the world’s most memorable spectacles. The team is led by award-winning director Nigel Jamieson , who won the 2011 Helpmann Award as Best Director for his production of Opera Australia’s La Fanciulla del West, as well as production designer Peter England and costume / projection designer Dan Potra . The dragons themselves are created by Sonny Tilders and his team at The Creature Technology Company, whose work includes Walking With Dinosaurs – the Arena Spectacular. The cast of 23 dragons pays homage to all of the favorites from the DreamWorks Animation film, including the single largest animatronic creature ever made by The Creature Technology Company. The stunning score features compositions from Icelandic singer-songwriter Jonsi from Sigur Ros and Oscar-nominated British film composer John Powell , who created the original score for the feature film.

HOW TO TRAIN YOUR DRAGON LIVE SPECTACULAR TOUR SCHEDULE

DREAMWORKS ANIMATION
DreamWorks Animation creates high-quality entertainment, including CG animated feature films, television specials and series, live entertainment properties and online virtual worlds, meant for audiences around the world. DreamWorks Animation is the largest animation studio in the world and has released 23 animated feature films, which have enjoyed both critical and commercial successes. These include the franchise properties of Shrek, Madagascar, Kung Fu Panda and How to Train Your Dragon. DreamWorks Animation became the first studio to produce all of its feature films in 3D and in 2010 became the first Company to release three CG feature films in 3D in a single year. The Company has been named one of the “100 Best Companies to Work For” by FORTUNE® Magazine for four consecutive years. In 2012, DreamWorks Animation ranks #14 on the list. DreamWorks Theatricals was established by DreamWorks Animation in 2007 to develop and produce live stage and arena show productions inspired by the Company’s franchise properties. Current productions in development – including How To Train Your Dragon Live Spectacular and Kung Fu Panda Arena Spectacular– are one-of-a-kind, global tours and immersive entertainment experiences for the whole family. DreamWorks Theatricals productions are guided by much of the creative leadership team that develops the studio’s award-winning feature films.


GLOBAL CREATURES
Global Creatures is an international entertainment group that develops new and exciting theatrical productions to take to audiences around the world. The animatronics arm, The Creature Technology Company, invents and deploys the latest in animatronic design. Their hugely successful productionWalking with Dinosaurs – The Arena Spectacular, based on the award winning BBC TV series, represents a new entertainment genre all on its own. The production is a spectacle of unprecedented size and quality, which captivates young and old alike. The Walking with Dinosaurs tour was the number one tour worldwide in 2010. Global Creatures is producing, with the National Theatre of Great Britain, the Australian production of the Tony Award-winning play WAR HORSE, opening in December 2012. The company will stage the World Premiere of King Kong, produced in co-operation with the estate of “Kong” creator Merian C. Cooper, in Melbourne in June 2013, and they have formed a partnership with Bazmark (the multi-media company founded and owned by Baz Luhrmann and Catherine Martin) to produce a stage musical adaptation of the first movie of Baz Luhrmann’s ground-breaking Red Curtain Trilogy, Strictly Ballroom.


S2BN ENTERTAINMENT
S2BN is an entertainment company specializing in the production of family oriented shows for theatres and arenas. Currently, S2BN has three successful shows in operation, the record breaking smash hitSpider-Man: Turn Off the Dark on Broadway, Rock of Ages now in its 4th year on Broadway, recently opened in London, touring throughout North America and on June 1 st, 2012 a major Warner Brother Picture Release, and thirdly, Fuerza Bruta, also in its 5th year in New York and touring throughout the world. For 30+ years S2BN’s leadership have been dominant and innovative forces in the international concert touring industry, working in exclusive partnerships with renowned, global artist such as The Rolling Stones, Barbra Streisand, U2 and Pink Floyd amongst many others. In that time they have also created and/or promoted a wide range of unique family entertainment attractions in tennis, figure skating, motorsports, boxing and wrestling as well as theatre, opera and symphony.


RZO DRAGON PRODUCTIONS
The RZO Companies group was formed on July 1, 1988 through the merger of Sound Advice, Inc. andJoseph Rascoff & Company, Inc. by their principals William Zysblat and Joseph Rascoff, respectively. For over twenty-five years, RZO and its predecessor organizations have been actively involved in the music business as tour producers and full-service business managers. RZO has represented such illustrious music artists as Rolling Stones, David Bowie, Sting, U2, The Police, Luis Miguel, Patti LaBelle, David Byrne and many others. The Company also represents personalities such as Carson Daly and Iman, along with the Estates of John Lennon and Ira and George Gershwin.