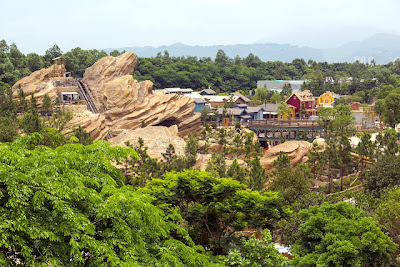 Along with the multidirectional terrain-style coaster, Big Grizzly Mountain Runaway Mine Cars, guests can also explore an entire themed land. Highlights include the water play of Geyser Gulch,  song and dance at the Grizzly Gulch Welcome Wagon Show, photo opportunities at The Old Jail, Assay Office and Lucky Nugget, hearty fare at the Lucky Nugget Saloon, merchandise at Bear Necessities, and Disney friends in their new Wild West outfits.

“The Resort greatly values the market of young adults,” said Wendy Chu, Director, Marketing, Hong Kong Disneyland Resort. “As such, we’ve made an effort to specifically target this demographic with creative interactive campaigns city-wide, both online and offline.

“The Resort has developed a limited-edition Grizzly Gulch Runaway Adventure board game, which has been praised by popular radio DJs who’ve played it. We’ve partnered with MegaBox to bring a giant version to the mall, providing photo opportunities and an immersive experience for participants. Also, to introduce the new themed land, we launched three funny videos featuring travel guru Tony Hung and internet celebrity Ming Jai, with an online game and prizes, to a fantastic response – we’re seeing the videos being shared widely. Additionally, we’ll be introducing 3D Illustration photo spots at an MTR station, where Guests can also scan QR codes to watch videos on their smartphones to learn more about the major experiences of Grizzly Gulch.”

“The Resort has taken a multidirectional approach to promote Grizzly Gulch to over 5,000 trade representatives in 20 cities worldwide,” said Larry Leung, Director, Travel Trade Sales, Hong Kong Disneyland Resort. “For the first time ever, we’re hosting online seminars to share information on Grizzly Gulch with our trade partners. These webinars are expected to reach a wider travel trade audience, including travel agency front-line staff, enabling them to access the latest product information and experience this unique themed land at the convenience of their fingertips.”

“One example is our partnership with Ctrip.com to invite 500 Mainland Chinese Guests to be among the first to experience this unparalleled runaway adventure before its premiere,” said Leung.

With Cast Members all ready for Grizzly Gulch’s debut, the Resort is hosting preview days to offer a first look to members of the local and international media, travel industry representatives, artists, celebrities, Magic Access Members, strategic partners, members of community groups, Cast Members and their families and others. These preview days will help spread word-of-mouth for the unique Wild West experience of Grizzly Gulch.

The new land’s main attraction is the unique Big Grizzly Mountain Runaway Mine Cars, featuring mine cars that will each take 24 Guests at a time on an unexpected runaway adventure. This multidirectional terrain-style coaster has three main highlights: the first is that the mine cars race both forward and backward, suddenly launching forward, making sharp turns and racing backwards for approximately one third of the entire journey; the second is that the mine cars traverse the entire themed land, through the mine shafts of Big Grizzly Mountain and around the township, including Geyser Gulch; the third is that the mine car tracks crisscross all across Grizzly Gulch’s landscape.


www.hongkongdisneyland.com
Subscribe to InPark for FREE!
Submit your news

Phase One of Star Wars: Galaxy’s Edge to open at Disneyland May 31 and at Walt Disney World August 29