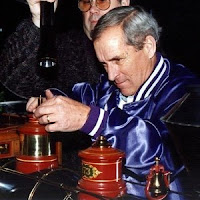 We are saddened to hear of the passing of Roger Broggie Jr., whose death was caused by a head injury sustained from a fall while working on a parade float in his Oregon hometown yesterday. Roger followed his father, Roger Sr., who was not only the head of the Disney Studio machine shop, but also my father’s mentor in the building of his Lilly Belle steam engine train. Roger Jr., his son Gary, and Don Iwerks, were the source of inspiration for all of The Walt Disney Family Museum’s camera displays, which include the mighty multiplane camera. The work and spirit of these men were an important part in building this institution, and our thoughts go out to his family and friends. We will miss him dearly.