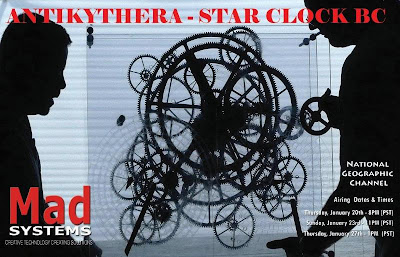 “In 1900, a group of Greek sponge divers happened upon a two thousand year old ship wreck at the bottom of the Aegean Sea that would re-write history. Hidden among a rich cache of bronze and marble statues, glassware and amphorae was a mechanism the size of a shoe box. Inside the mechanism were mathematical gears and pointers. The Ancient Greeks were known to be philosophers, poets, and mathematicians but there was nothing in the archeological record to suggest that they were also engineers and technicians capable of creating something so complex in the year 150 BC.

For 100 years researchers have been trying to understand what the mechanism does. Mad Systems produced a larger scale model of the Antikythera mechanism in order to better understand the ancient device. Interviews with experts around the world help shed light on the mystery of this phenomenal artifact.

Mad Systems is a Technology Company specializing in Audio Visual and Interactive design and implementation… but our capabilities go well beyond that as you will see in this National Geographic program in the Naked Science series.”

Judith Rubin
Judith Rubin ([email protected]) is a leading journalist, publicist, strategist, blogger, content marketing specialist and connector in the international attractions industry. She excels at writing about all aspects of design and technical design, production and project management. Areas of special interest include AV integration and show control, lighting design and acoustics, specialty cinema, digital video and world’s fairs. Judith has ties to numerous industry organizations. From 2005-2020 she ran communications, publications and social media for the Themed Entertainment Association (TEA). In 2013, she was honored with the TEA Service Award. She was development director of IMERSA, and co-chair of the 2014 IMERSA Summit. She was publicist for the Large Format Cinema Association in the 1990s, now part of the Giant Screen Cinema Association (GSCA) and has also contributed to the publications of PLASA, IAAPA and the International Planetarium Society. Already making her mark as a magazine and book editor, Judith joined World’s Fair magazine in 1987, which introduced her to the attractions industry. Launching as a freelancer in the mid 1990s she has contributed to dozens of publications and media outlets including Funworld, Lighting&Sound America, Sound & Communications, Urban Land, The Raconteur and The Planetarian. She joined InPark in 2010. Judith earned a Bachelor of Fine Arts from Pratt Institute. She has lived in New York City and the San Francisco Bay Area, and now makes her home in Saint Louis, where she is active in the local arts and theater community.
Share
Facebook
Twitter
Linkedin
Email
Print
WhatsApp
Pinterest
ReddIt
Tumblr
Previous articleFOLLOWING WARNER BROS. RECENT ACQUISITION OF WARNER BROS. STUDIOS LEAVESDEN, THINKWELL GROUP ANNOUNCES ITS INVOLVEMENT DESIGNING AND PRODUCING BEHIND THE SCENES LOOK AT THE HARRY POTTER MOVIE SERIES
Next articleInternational Forest Film Festival Winning Films announced by Jackson Hole Wildlife Film Festival