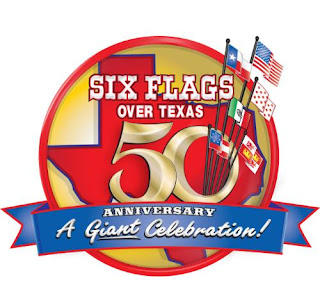 ARLINGTON, Texas, Feb. 18, 2011 /PRNewswire/ — On August 5, 1961 Texas oilman Angus G. Wynne, Jr. saw a dream realized.  A $10 Million investment and the sweat and labor of 400 construction workers created a 105-acre theme park, strategically nestled between Dallas and Fort Worth, with themed areas representing the flags that have flown over the great state of Texas. Fifty years later, Six Flags Over Texas is said to be the number one paid tourist attraction in the Southwest United States.
Six Flags Over Texas, the anchor of the Arlington Entertainment District, has a Giant Celebration planned for its 50th anniversary season beginning with a special Opening Day ceremony on Saturday, March 5, at 9:30 a.m.  To launch the year-long event, guests may purchase tickets online for $19.61 beginning Friday, February 18. The tickets will be valid only for March 5 and 6, 2011.
Opening Day highlights will include members of the Wynne family, current and former city of Arlington Mayors and the park’s president, Steve Martindale.  The Golden Anniversary season promises to be a banner year, filled with incredible thrills and unforgettable memories.
“Six Flags Over Texas is an important part of Texas heritage.  Many of our guests have grown up with this park and we’re a part of their family,” said Steve Martindale, Six Flags Over Texas Park President.  “We look forward to celebrating this milestone anniversary year with every guest and would encourage those who haven’t visited in a while to come back and rekindle their favorite Six Flags memories.”
As the park’s August 5, 2011 birthday nears, guests will be invited to join the countdown. Saturday, June 18, 2011 will mark the launch of the park’s “50 Days of Fun,” which will include, among many special events, a park closing show featuring the Dallas Cowboy Cheerleaders, and the re-opening of a fan favorite – Casa Magnetica. Additionally, guests will be treated to special birthday surprises like commemorative t-shirts and other fun giveaways as a token of appreciation for 50 years of guest loyalty. Also beginning on August 5, 2011, Six Flags Over Texas will host the ultimate birthday party; a Texas-sized bash so big it will take two days to fit it all in.
The centerpiece of the anniversary season is the opening of the NEW Texas Giant in late spring.  This wood and steel super hybrid coaster boasts a number of industry records including: the world’s steepest wooden coaster drop, three heart-pounding turns at more than 90 degrees, and a custom-designed steel track.  This one-of-a-kind coaster is ALL NEW from the ground up.
More thrills abound with 12 other exciting roller coasters and a special area for the little thrill seekers – Looney Tunes USA.  Don’t miss “meet and greets” with Six Flags’ famous cast of characters, including Mr. Six – the ageless, dancing cheerleader for fun.  The 50th Anniversary Giant Celebration begins Saturday, March 5, 10:30 a.m. to 6 p.m. and Sunday, March 6, 11 a.m. to 6 p.m.
Spring Break at Six Flags, presented by Stride®, takes place March 12 to March 20, 2011.  You can visit sixflags.com/overtexas for information on operating hours and pricing.
The 2011 season promises to be the best yet. This is the year to Go Big. Go Six Flags Over Texas!
About Six Flags Entertainment Corporation
Six Flags Entertainment Corporation is the world’s largest regional theme park company with 19 parks across the United States, Mexico and Canada. Six Flags Over Texas, the company’s flagship location, is celebrating its 50th anniversary season in 2011.
On Twitter at twitter.com/sixflags
On Facebook at facebook.com/sixflagsovertexas
Find more articles about theme parks & attractions: IPM online archives

Judith Rubin
Judith Rubin ([email protected]) is a leading journalist, publicist, strategist, blogger, content marketing specialist and connector in the international attractions industry. She excels at writing about all aspects of design and technical design, production and project management. Areas of special interest include AV integration and show control, lighting design and acoustics, specialty cinema, digital video and world’s fairs. Judith has ties to numerous industry organizations. From 2005-2020 she ran communications, publications and social media for the Themed Entertainment Association (TEA). In 2013, she was honored with the TEA Service Award. She was development director of IMERSA, and co-chair of the 2014 IMERSA Summit. She was publicist for the Large Format Cinema Association in the 1990s, now part of the Giant Screen Cinema Association (GSCA) and has also contributed to the publications of PLASA, IAAPA and the International Planetarium Society. Already making her mark as a magazine and book editor, Judith joined World’s Fair magazine in 1987, which introduced her to the attractions industry. Launching as a freelancer in the mid 1990s she has contributed to dozens of publications and media outlets including Funworld, Lighting&Sound America, Sound & Communications, Urban Land, The Raconteur and The Planetarian. She joined InPark in 2010. Judith earned a Bachelor of Fine Arts from Pratt Institute. She has lived in New York City and the San Francisco Bay Area, and now makes her home in Saint Louis, where she is active in the local arts and theater community.
Share
Facebook
Twitter
Linkedin
Email
Print
WhatsApp
Pinterest
ReddIt
Tumblr
Previous articleBay Area Discovery Museum Launches Center for Childhood Creativity
Next articleMoody Gardens Enters Final Phase of $25m Rainforest Pyramid® Enhancement