Nepal, Mount Everest — Under the guidance of living legend Apa Sherpa, 360Heros made it to the top of the world in June, 2013 in a collaborative effort with HP, Intel, Adobe, Dolby, ATI, NLT, Steadicam, and DJI to tell the story of his dedication to the Sherpa community, school, and foundation at Mount Everest in 360 video, 3D, and theatrical.

The documentary of the life of Apa Sherpa by Everest Media Productions is currently moving into the post-production stages, but 360Heros is excited to offer a sneak-peek into the life of the famous mountaineer.

The 360 Video/Photo used was created by 360Heros which currently has 8 different versions of 360Heros 360 Plug-n-Play holders, all constructed from a 3D printed aircraft grade flexible nylon and designed to capture HD 360° by 180° video on the most challenging shoots, from extreme environments to intimate spaces. And more recently just released the first 3D 360 Video and Photo which we believe the Oculus Rift and gaming communication will really begin to take advantage of.

In recent months, 360Heros gear has filmed amazing, underwater interactive video of sharks off a Micronesian reef, this documentary in Mount Everest, the Webby Award winning Beck/Chris Milk interactive concert, and a range of large format display and online interactive projects for companies such as Under Armour, Ford and Visa. 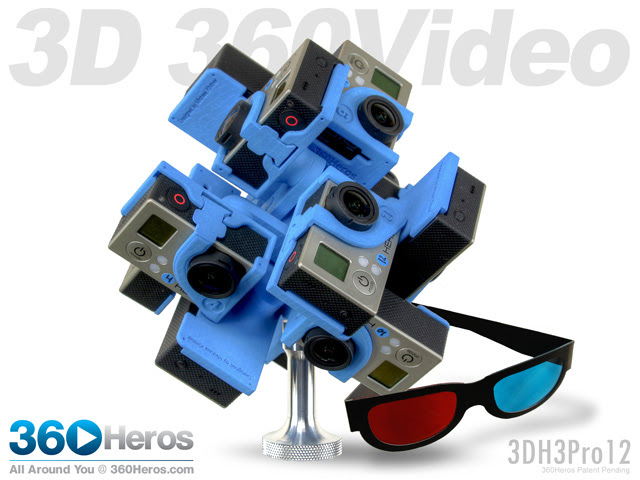 360Heros is also introducing the world’s first 3D fully spherical HD 360° by 180° video capture system using 12 GoPro® Hero3 or 3+ Black Cameras. The 3DH3Pro12 is designed to record and render any environment in complete pan-optical motion andthree dimensions.   Using the whole field of stereoscopic human vision, viewers are able to plunge into 3D 360° interactive video experiences with off-the-charts sensations. The gaming industry and Oculus Rift® users are going to love us!

The breakthrough 360Heros™ 12-camera snap-in holder forms a tight array of 6 pairs of GoPro® Hero3 or 3+ Black cameras, and the video is processed using either side-by-side, over-under or many other types of stereoscopic formats. With an output of 6K x 3K in full spherical form, the imagery is projection quality and strikingly crisp when down sampled for online web and mobile 360 players.

For the Oculus Rift users, the 3DH3Pro12 will now allow everyone to create and enjoy their own 3D 360° video presentations using the world’s most versatile camera on the planet – the GoPro.

360Heros will be exhibiting through Jan 10 at Booth 31424 at the Consumer Electronics Show, Las Vegas

Joe Kleimanhttp://wwww.themedreality.com
Raised in San Diego on theme parks, zoos, and IMAX films, InPark's Senior Correspondent Joe Kleiman would expand his childhood loves into two decades as a projectionist and theater director within the giant screen industry. In addition to his work in commercial and museum operations, Joe has volunteered his time to animal husbandry at leading facilities in California and Texas and has played a leading management role for a number of performing arts companies. Joe previously served as News Editor and has remained a contributing author to InPark Magazine since 2011. HIs writing has also appeared in Sound & Communications, LF Examiner, Jim Hill Media, The Planetarian, Behind the Thrills, and MiceChat His blog, ThemedReality.com takes an unconventional look at the attractions industry. Follow on twitter @ThemesRenewed Joe lives in Sacramento, California with his wife, dog, and a ghost.
Share
Facebook
Twitter
Linkedin
Email
Print
WhatsApp
Pinterest
ReddIt
Tumblr
Previous article
Preliminary Schedule Announced for IMERSA Summit 2014
Next article
Franceen Gonzales of WhiteWater West Elected to ASTM International Board of Directors