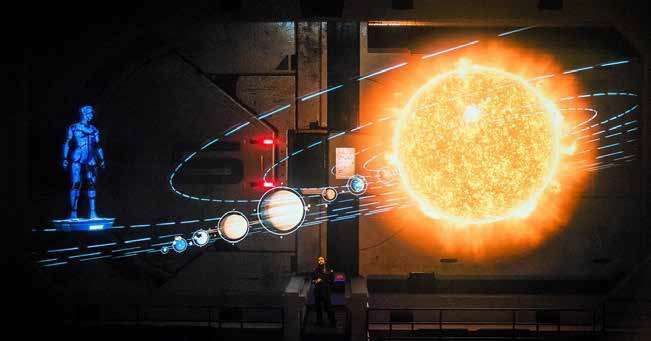 In April 2018, 3D Live, a Los Angeles-based firm that specializes in 3D LED screens and virtual reality programming, will receive a Thea Award for Innovative Technology, recognizing its Holographic 3D LED display. According to the Themed Entertainment Association (TEA), the trade association behind the prestigious awards which honor the best in the themed entertainment design field, “Modular and versatile, this technology is a significant evolution in creating large-scale 3D presentations for themed and experiential venues. It solves many problems and limitations associated with projectionbased 3D systems. The interface with live performers, VR and other immersive systems is seamless and powerful as demonstrated in the ‘Mass Effect: New Earth’ attraction at California’s Great America.”

In the years since Cedar Fair acquired California’s Great America as part of its acquisition of the Paramount Parks chain, a major piece of property lay vacant in a key location at the center of the park. Previously known as the “Action Theater,” the building had housed motion-based ride experiences based on Hollywood franchises ranging from James Bond to “Happy Feet.”

It reopened in 2016 as a major new attraction, “Mass Effect: New Earth,” based on the popular Electronic Arts/BioWare video game franchise. Cedar Fair had launched a digital technology initiative. The park’s Silicon Valley location was a good fit, and so was the 3D Live technology.

To begin the “Mass Effect: New Earth” experience, guests are given passive 3D glasses and are separated into three tiered rows along the exterior of the attraction building. Doors to the theater are at the end of each row, and above each door is a 46-inch monitor showing a three-minute preshow covering the backstory of the attraction: a trip to a vacation resort on a distant planet, along with safety instructions.

As guests enter the theater, they find a live actor portraying a captain standing on a platform in front of what appears to be a door. The story arc is similar to other theme park motion-simulator attractions; this time, something goes drastically wrong during a pleasure cruise.

What makes “Mass Effect: New Earth” stand out from its predecessors is the level of immersion and integration. During the four-minute experience, 3D effects are accomplished through polarized LEDs built into the screen. Integrated with near-field beamforming audio technology, the 3D projection makes it appear as if the ship’s captain is communicating with holographic characters that appear on either side of the actor via the stereographic animation. It is for these reasons that the park calls the attraction a “4D Holographic Journey.”

3D Live’s co-founders Nathan Huber and Ryan Pardeiro’s roots lie in both LA’s underground music scene as the duo Kid Infinity and in the realm of media technology. To differentiate themselves from competing musicians, Huber and Pardeiro began integrating 3D imagery into their shows. At the same time, the two were working for a company that had developed a 3D screen for a Michael Jackson tour scheduled for 2009. “You can see it in the concert film,” said Huber, “but it’s not as impressive as seeing it live because it lacks both the scale and the 3D of the actual screen. Members of our [3D Live] team worked on that tour. That wall was costly and relatively low resolution (1920×1080); it was also extremely bulky and very heavy.”

The natural progression of technology took care of these issues. Huber noted that, every few months, new LED technology is released, resulting in more powerful walls at a lower cost and with lighter frames. With the issuance of 3D Live’s 3D LED patents and their efforts to further develop this technology, 3D Live began constructing custom screens for bands such as Primus and concert venues such as Coachella. 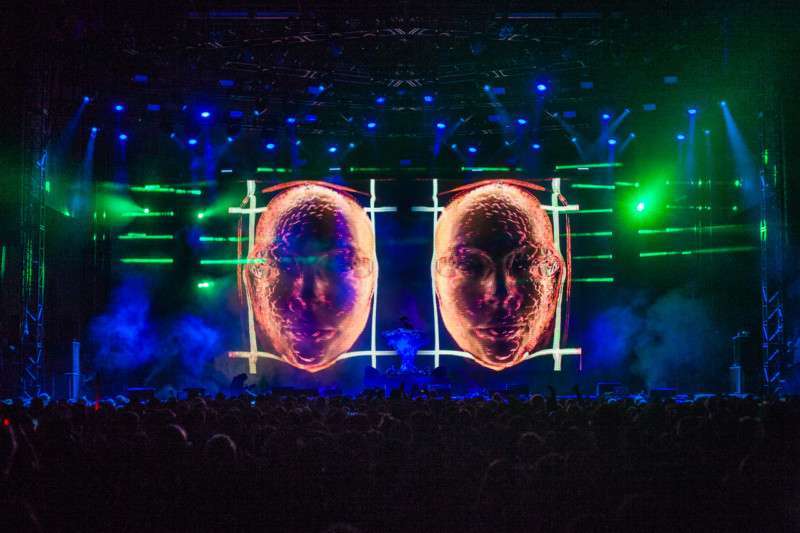 Most recently, 3D Live completed the 28-city North American concert tour of electronic musician Flying Lotus. The show uses over an hour of 2D and 3D content utilizing a screen comprised of 3D Live’s LED panels. “We put in a number of 2D moments to give people a break,” says Huber, “That helps people continue to have the WOW factor with the 3D, and it’s full of hero moments – such as a spaceship flying over the stage.”

A key unifying theme of 3D Live’s concert presentations is that instead of just showcasing visuals for visual’s sake, they frame and appear to interact with live performers. The same concept was utilized for “Mass Effect: New Earth,” where the live actor portraying the ship’s captain not only interacts with action behind the screen, but with holographic controls and characters popping up in front of it. Because the 3D images are being produced by the LED panels, rather than from a forward-mounted projector, the actor does not produce a screen shadow and an element of realism is maintained.

At the 2017 IAAPA Attractions Expo, 3D Live showcased a gaming application for their 3D LED screens at the MediaMation booth. In just eight weeks, 3D Live’s inhouse studio AXO created the virtual reality game “Ion Torq,” where two two-person teams competed against each other in a shooting and driving game while wearing VR headsets and sitting in all-terrain vehicle styled motion bases. 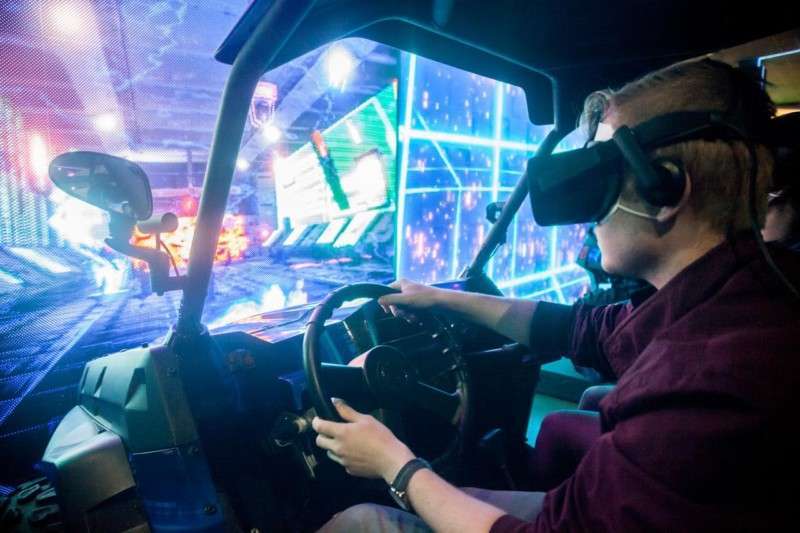 Behind the vehicles sat a giant 3D Live LED screen. IAAPA attendees waiting in line to experience the VR game could don 3D glasses and experience on the screen what those on the attraction were seeing in real time. This application is part of 3D Live’s strategy going forward, through which the company intends to change the way attractions are experienced. According to Christian Dieckmann, chief strategy officer of 3D Live, “In an attraction, this allows parents who may not want to ride to experience what their kids are experiencing.”

The company is looking at ways of linking various forms of media. For example, in addition to the 3D LED screen providing images to those not riding or those in the queue, through connected data on their devices, aspects of the interactive attraction could be manipulated from both the queue and exiting parties. Huber points out that “the model that’s been in place for the past 20 years has inherent limitations. We have to think outside the box. New tools, faster processing, and cross-platform communications will allow this.”

Dieckmann adds, “The line, and also the exit, becomes part of the attraction. Crosstalk, tied to the overall experience, allows each group to manipulate the other.”

3D Live is also looking at the cinema and competitive electronic gaming markets for its 3D LED screens. “When people are playing games on their computers, they’re being displayed in 2D,” says Huber, “But they’re actually being processed in 3D space, so the transition to a 3D screen is an easy one.” Without projectors, which limit the shapes of screens, the 3D Live screens do away with issues such as projector light, hot spots, and an inability to project true black images.

With e-gaming, one concept the company is developing involves covering all four walls of a room with the 3D LED tiles. “Without the needs for a projection window, we can get a continuous 360 degree 3D image,” says Huber.
For a spectator of a gaming competition, this expands the view to not only what the competing player sees, but what’s to their side and behind as well.

The company is also examining multi-use applications of its 3D LED screens for theme parks and attractions. “Without having to worry about projection, we can actually increase the curvature of the screen,” Huber points out, which would result in a more intimate and immersive image.

3D Live prides itself on its integration of the newest technologies with its screens and VR programs. As the public’s interest in virtual reality and augmented reality increases, according to Huber and Dieckmann, the interest increases for other forms of immersive entertainment, for which 3D Live’s 3D LED technology provides a versatile solution. • • •

Joe Kleimanhttp://wwww.themedreality.com
Raised in San Diego on theme parks, zoos, and IMAX films, InPark's Senior Correspondent Joe Kleiman would expand his childhood loves into two decades as a projectionist and theater director within the giant screen industry. In addition to his work in commercial and museum operations, Joe has volunteered his time to animal husbandry at leading facilities in California and Texas and has played a leading management role for a number of performing arts companies. Joe previously served as News Editor and has remained a contributing author to InPark Magazine since 2011. HIs writing has also appeared in Sound & Communications, LF Examiner, Jim Hill Media, The Planetarian, Behind the Thrills, and MiceChat His blog, ThemedReality.com takes an unconventional look at the attractions industry. Follow on twitter @ThemesRenewed Joe lives in Sacramento, California with his wife, dog, and a ghost.
Share
Facebook
Twitter
Linkedin
Email
Print
WhatsApp
Pinterest
ReddIt
Tumblr
Previous articleNMAAHC: Tracing the long arc of history
Next articleTEA Summit: Lessons of collaboration