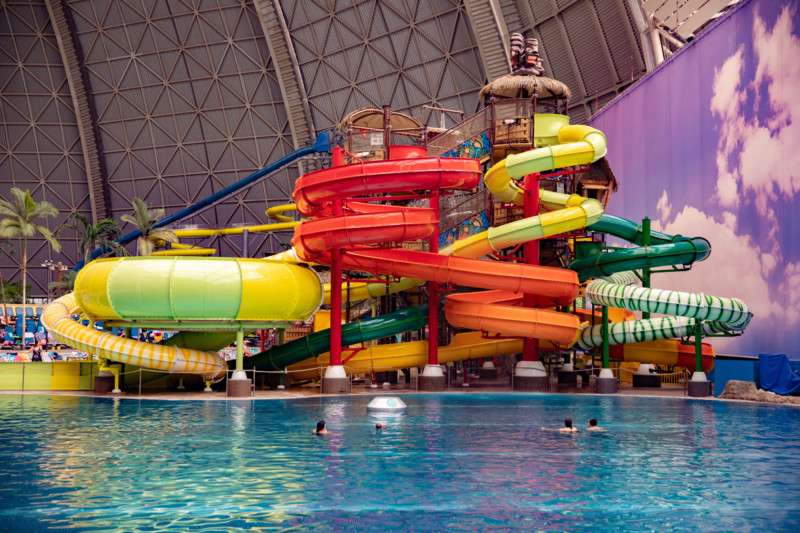 The Tropical Islands Resort near Brandenburg, Germany, was already renowned as the largest indoor waterpark in the world with Germany’s highest waterslide tower (27 meters or 88.5 feet). The 650-hectare (1,606-acre) site was developed inside what was formerly an airship hangar known as the Aerium. Now, with the addition of multiple new aquatic attractions configured in a unique new way by premier waterslide designer Polin Waterparks (Istanbul), the resort has taken its moniker of being the “biggest” and pushed it to “beyond compare.”

But the size of the installation and the number of slides don’t come close to telling the whole story. This highly interactive, multi-level, themed attraction offers a variety of unique features that set it apart from other installations Polin has created. For example, Polin fused eight slides together encompassing 48 pieces of custom-designed plates for this structure. In addition, Polin blended eight different theme elements into the attraction. Combined, its waterslides take riders on a 317-meter (1,040-feet) journey, with one stretch of slide reaching 66 meters (216 feet).A custom-designed entrance arch welcomes guests as they approach the one-of-a-kind, 15-meter- (49-feet-) tall aquatic attraction. As guests climb the 116 stairs to reach the top of the multi-level structure, they have a bird’s eye view of the custom-made, wood-like themeing that camouflages all of the structure’s metal parts, including a themed hut and a large, unique, three-dimensional, themed bucket.

Ten components combine to create six two-level modules that are anchored using a special floor-mounting system. Similarly, a custom hydro-mechanical system was designed to fit into the smallest space possible. Despite the many custom and specialty aspects of the structure, however, Polin’s safe, adaptable solutions meet all TUV standards.World’s largest indoor waterparkThe original structure for Tropical Islands was built on the Brand-Briesen Airfield in 1938. In 1992, the site was purchased for use in protecting aircraft, and a hall was constructed extending 360 meters (1,181-feet) long, 210 meters (688-feet) wide and 107 meters (351 feet) high, making it one of the largest buildings on earth by volume. It also became the world’s largest single hall without supporting pillars inside. (It’s the third-largest among halls in general and is larger, even, than Canada’s World Waterpark at West Edmonton Mall.) After the airship owner went bankrupt, Malaysian corporation Tanjong purchased the site and building. It officially opened the theme park in December 2004 and has attracted millions of guests in the years since.

Tropical Islands brings together Asia, the Pacific region, Africa and South America all under one roof with a temperature around a pleasant 26 degrees Celsius (79 degrees Fahrenheit). It is the ideal spot for guests to recharge their batteries, relax and have a good time. It offers a wide range of comfortable accommodations and is open year-round, 24 hours a day.
The park has two main areas. Its Tropical World section features a huge water world with fun and games for kids, the world’s largest indoor rainforest, a tropical village with authentic buildings, a shopping boulevard, a fitness club and comfortable accommodations in the dome’s 195 rooms and lodges or the many tents in the Rainforest and the Sunset Camp. The second half is the Sauna and Spa Complex, which offers extensive spa facilities covering an area of almost 10,000 square meters (107,639 square feet).

This past December, Tanjong sold the facility to Parques Reunidos Group, which has announced significant expansion plans. Parques Reunidos is a world-leading leisure park operator with a portfolio of more than 60 parks in Europe, the Middle East, Americas and Australia.

The custom theming of the new attraction at Tropical Islands was an important aspect of Polin’s success in making sure it fit naturally into the existing park’s setting. Polin works often on such projects due to its 40 years of experience across the globe in the composites sector. Polin leads the industry in waterslide manufacturing technologies. Today, 100 percent of its production is in RTM technology. That technology extends to the creation of specialty offerings such as Natural Light Effects, Special Pattern Effects, Transparent and Translucent Waterslides, and Slide ‘N Roll, which combines exclusive sound, design and light effects.

Many of these technologies feature prominently into the slides that Polin included in the Tropical Islands attraction. For example, its Compact Slide, an engineering miracle, incorporates special angles and radius components that allow it to fit into even the smallest of pool spaces. Similarly, its Windigo is a sophisticated thrill ride with flexibility that includes both kamikaze or freefall options for the multi-racer section of the slide. Benefits of Polin’s Multislide are part of the fun, too, allowing increased capacity, while its Space Hole is engineered to create the ultimate excitement and is one of the largest slides for speed riding.

Tropical Islands’ extensive size allows it to accommodate high-capacity crowds – up to 8,200 visitors a day and 6,000 at one time. Additional statistics that help convey its massive structure include:

Joe Kleimanhttp://wwww.themedreality.com
Raised in San Diego on theme parks, zoos, and IMAX films, InPark's Senior Correspondent Joe Kleiman would expand his childhood loves into two decades as a projectionist and theater director within the giant screen industry. In addition to his work in commercial and museum operations, Joe has volunteered his time to animal husbandry at leading facilities in California and Texas and has played a leading management role for a number of performing arts companies. Joe previously served as News Editor and has remained a contributing author to InPark Magazine since 2011. HIs writing has also appeared in Sound & Communications, LF Examiner, Jim Hill Media, The Planetarian, Behind the Thrills, and MiceChat His blog, ThemedReality.com takes an unconventional look at the attractions industry. Follow on twitter @ThemesRenewed Joe lives in Sacramento, California with his wife, dog, and a ghost.
Share
Facebook
Twitter
Linkedin
Email
Print
WhatsApp
Pinterest
ReddIt
Tumblr
Previous article#77 – The best in themed entertainment
Next articleSpecial events and program schedule announced for IAAPA Expo Asia 2019