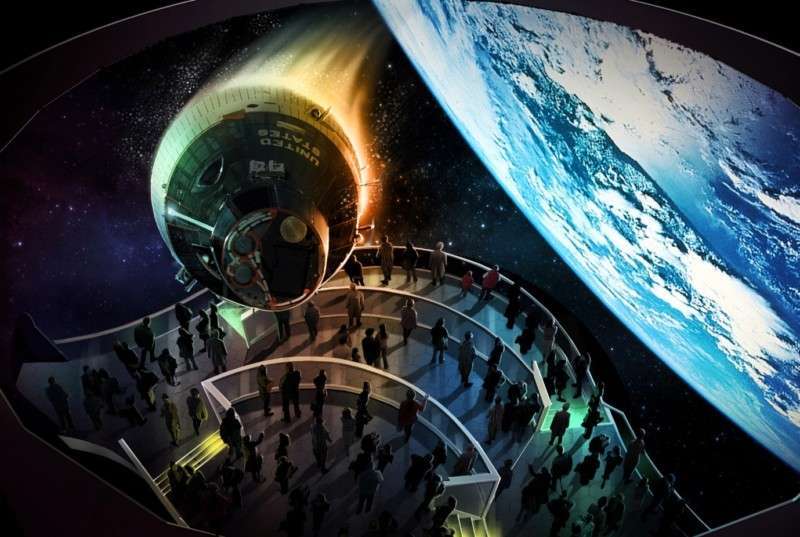 The new $23m Heroes & Legends Attraction featuring the US Astronaut Hall of Fame® at Kennedy Space Center in Florida, USA, uses a range of Delta Media Servers to drive its engaging digital visitor experiences. A new 4D theatre and an immersive cylindrical theatre are among the visitor zones that feature 7thSense Design technologies.

Heroes & Legends at Kennedy Space Center focusses on the Mercury and Gemini astronauts, the pioneers of human space exploration.

The attraction includes three immersive and engaging experiences: the ‘What is a Hero?’ a giant curved screen, 7-minute discovery zone, the ‘Through the Eyes of a Hero’ custom-built 4D theater and the ‘A Hero Is…’ collection of nine interactive exhibits. Completing the attraction is the US Astronaut Hall of Fame which completes the attraction with its centerpiece 10-feet diameter cylindrical rear-screen projection surface.

Chris Cooper, project manager at Electrosonic explained; “We’ve had a close partnership with 7thSense for many years and felt comfortable with using them yet again due to their level of customer support and product quality.”

7thSense first worked with the Kennedy Space Center when supplying Delta Media Servers to the Space Shuttle Atlantis attraction which opened in June 2013.

Ken Showler, 7thSense director adds, “We’re are very proud of our continued partnership with Electrosonic in delivering these systems to Kennedy Space Center. Having our products installed in yet another area of such a world-class site is really testament to the relationship we have, and to the performance and dependability of our solutions.”

Heroes & Legends uses the early years of the space program to explore the concept of heroism, and the qualities that define the individuals who inspired their generation. The 37,000-square-foot, retro-fitted building marries cutting-edge technology with mesmerizing special effects, priceless artifacts and thought-provoking exhibits.

Joe Kleimanhttp://www.themedreality.com
Raised in San Diego on theme parks, zoos, and IMAX films, Joe Kleiman would expand his childhood loves into two decades as a projectionist and theater director within the giant screen industry. In addition to his work in commercial and museum operations, Joe has volunteered his time to animal husbandry at leading facilities in California and Texas and has played a leading management role for a number of performing arts companies. Joe has been News Editor and contributing author to InPark Magazine since 2011. HIs writing has also appeared in Sound & Communications, LF Examiner, Jim Hill Media, and MiceChat. His blog, ThemedReality.com takes an unconventional look at the attractions industry. Follow on twitter @themedreality Joe lives in Sacramento, California with his fiancé, two dogs, and a ghost.
Share
Facebook
Twitter
Linkedin
Email
Print
WhatsApp
Pinterest
ReddIt
Tumblr
Previous articlePicsolve Extends Merlin Partnership with Photo Opportunities at Madame Tussauds Nashville
Next articleExpo 2020 Dubai corporate partnerships