7thSense Design Receives Two Made in the South East Awards 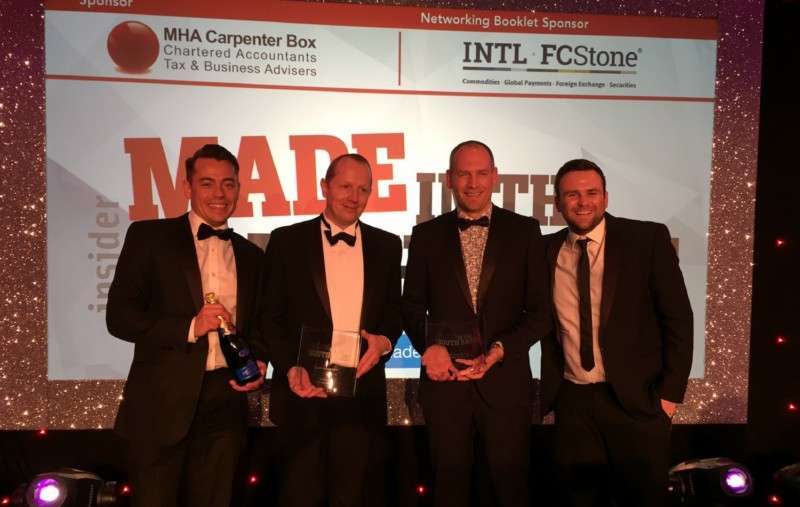 7thSense Design has been named as the winner of two separate awards at the 2017 Made in the South East Awards. The accolades of ‘Export Award’ and ‘Digital Engineering Technology Award’ were presented to the team at a finalist event on Thursday 23rd November.

In their fifth year, these annual awards are designed to recognize and reward manufacturing companies based in the South East of the UK that have demonstrated success in innovation, product development and growth in either domestic or overseas markets.

Matt Barton, managing director of 7thSense, accepted the award on behalf of the company, “The competition this year was especially tough, there’s so many ambitious organisations and a great deal of innovation in the region. We are so honored to have be recognized with both awards and this was yet another occasion where we can proud of our incredible team.”

The Made in the South East Awards attract manufacturers of all sizes from all parts of the region. A panel of expert judges and specialists review some of the most innovative and successful companies in the South East who put themselves forward as entrants across the eight categories each year.

Established in 2004, 7thSense specialises in advanced Media Serving for markets including Themed Entertainment, 3D Theatres, Visitor Attractions, Planetaria, Digital Signage and Live Events. With offices in Sussex, England, and Michigan, USA, the company has sold thousands of products worldwide and has recently opened a third office in Orlando, Florida, to support a growing customer network in the area.

As regional winners, 7thSense Design will now stand as finalists in the 2018 Made in the UK Awards, in categories of Export and Digital Engineering and Technology, in Liverpool on 20 June next year.

Joe Kleimanhttp://wwww.themedreality.com
Raised in San Diego on theme parks, zoos, and IMAX films, InPark's Senior Correspondent Joe Kleiman would expand his childhood loves into two decades as a projectionist and theater director within the giant screen industry. In addition to his work in commercial and museum operations, Joe has volunteered his time to animal husbandry at leading facilities in California and Texas and has played a leading management role for a number of performing arts companies. Joe previously served as News Editor and has remained a contributing author to InPark Magazine since 2011. HIs writing has also appeared in Sound & Communications, LF Examiner, Jim Hill Media, The Planetarian, Behind the Thrills, and MiceChat His blog, ThemedReality.com takes an unconventional look at the attractions industry. Follow on twitter @ThemesRenewed Joe lives in Sacramento, California with his wife, dog, and a ghost.
Share
Facebook
Twitter
Linkedin
Email
Print
WhatsApp
Pinterest
ReddIt
Tumblr
Previous articleTaylor Jeffs Named President and Chief Creative Officer of The Goddard Group
Next articleChristie Illuminates Lumieres Hong Kong Festival