[quote]In my opinion, as an artist and professional working for 20 years in the visual & lighting design for the world’s biggest shows & spectacles such as the Ceremonies of Youth Olympic Games in Singapore, “Neopter” is a genuine revolution and our greatest achievement for a small visual & lighting design agency. Being able to overcome all the technical challenges and to develop a solution that enables us to freely imagine infinity of artistic and technical possibilities is just extremely rewarding. After a year of hard work and dedication, I can honestly say that this is the first “flying proof” of our striving passion. Thanks to our partners the Puy du Fou, from now on, the sky has no limit for our creative imagination.” — Koert Vermeulen, CEO & principal designer at ACT lighting design.[/quote]

Brussels, Belgium — On August 29th, the French theme park “Puy du Fou” was the stage for a world technology breakthrough: for the first time, flying drones “Neopters”, developed by Belgium based ACT Lighting Design in partnership with Puy du Fou, delivered a live performance, becoming full-fledged “actors” of the “Cinéscénie” night show. Four technology patents were filed for the “Neopter”, the first drone able to simultaneously fly in an aerial fleet without any human intervention and perform synchronized choreography in the air or immersed in water.

Previously in 2013, the talents of Koert Vermeulen, principal designer of ACT lighting design were put to work with the Puy du Fou’s team, in the framework of “Cinéscénie“, the world’s biggest night-time spectacle, as Koert Vermeulen was asked to revamp this unique show through a brand new lighting scenography. Then Vermeulen had the precursory idea to introduce drones into the show while orchestrating them to create an innovative choreography. 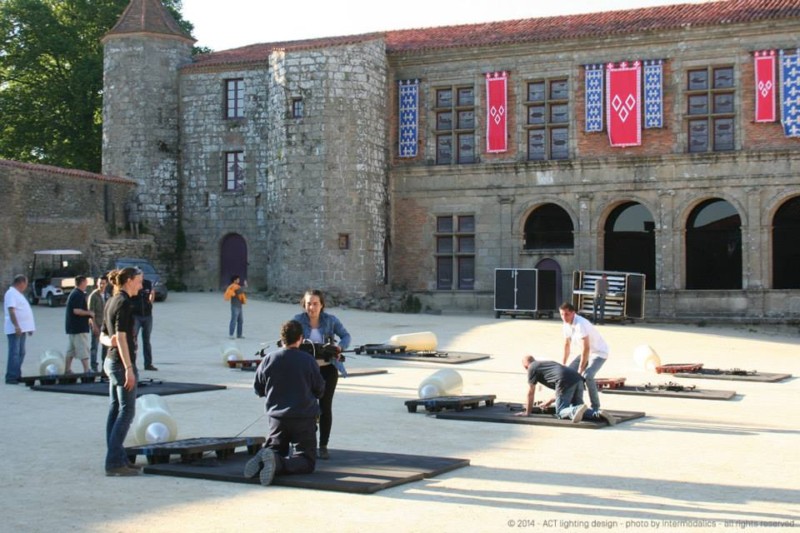 Together, they decided to transform the sky of “Cinéscénie” into a scene without any limits. ACT lighting design, Puy du Fou and the General Department of French Civil Aviation (DGAC), with a highly qualified team of about 50 engineers, technicians, designers, programmers teamed up in secrecy to work on “Neopter’s“  innovative technology. After 1 year of development and the official approval by DGAC, the world’s premiere of “Neopter“ took place on 29th of August 2014, in Puy du Fou theme park in France during the “Cinéscénie“ show. Through the end of the season, “Neopter” will appear in several scenes during this nighttime spectacle to produce astounding visual effects and enhance the scenography to amaze the public.

The “Neopter” is a new generation drone, a new carrier of staging, intelligent and independent, that adds a new dimension to entertainment shows. Built to operate within an aerial fleet of autonomous drones, “Neopter” is able to evolve and to dance simultaneously in the open air at 60 meters above the scene and to perform choreography of flying and illuminating decors. 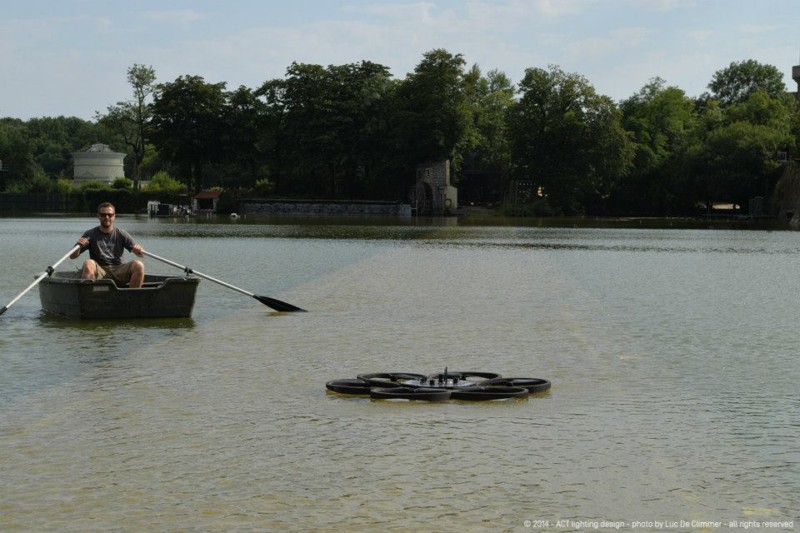 Invisible during the night, the drones can move simultaneously, carry in the air lighting decorations and perform a real ballet in the air, following the actors on the ground. By their double function of “scenic carrier” and real “leading actor”, “Neopter” revolutionizes the staging universe and bring a completely new experience to the spectators.  With its onboard intelligence and a GPS signal, ”Neopter” is able to locate itself in the open air autonomously. It can fly without any human intervention. The combination of “Neopter’s” four key features makes it a first in the world: *an aerial fleet capable of performing an outdoor aerial choreography in strenuous wind conditions; *autonomous flights and fully scalable till with several hundreds of drones being able to carry sound, video, lighting and scenography or special effects like pyrotechnics.; *a weight/power ratio record, the drones being able to carry a load up to 3kg; *flight under rain conditions and the ability to land and take off from water, being completely waterproof.

The creative and technical team of ACT lighting design and Puy du Fou is planning to deploy 50 “Neopters” in the forthcoming months. “Neopter” will be available to perform and dance all over the world thanks to a robust and safe technology. ACT lighting design and Puy du Fou International will propose this innovation together to big events and live shows all over the world, an “Entertainment drones industry“ premiere.

Joe Kleimanhttp://wwww.themedreality.com
Raised in San Diego on theme parks, zoos, and IMAX films, InPark's Senior Correspondent Joe Kleiman would expand his childhood loves into two decades as a projectionist and theater director within the giant screen industry. In addition to his work in commercial and museum operations, Joe has volunteered his time to animal husbandry at leading facilities in California and Texas and has played a leading management role for a number of performing arts companies. Joe previously served as News Editor and has remained a contributing author to InPark Magazine since 2011. HIs writing has also appeared in Sound & Communications, LF Examiner, Jim Hill Media, The Planetarian, Behind the Thrills, and MiceChat His blog, ThemedReality.com takes an unconventional look at the attractions industry. Follow on twitter @ThemesRenewed Joe lives in Sacramento, California with his wife, dog, and a ghost.
Share
Facebook
Twitter
Linkedin
Email
Print
WhatsApp
Pinterest
ReddIt
Tumblr
Previous articleGerstlauer Opens Three Interactive Flat Rides on Three Continents
Next articleDalian-Wanda Group Begins Construction on Company’s First Theme Park Coaster