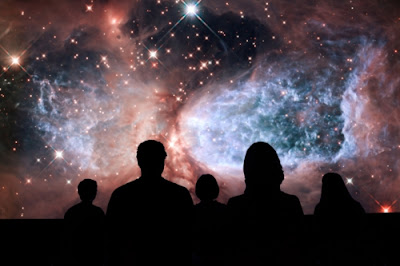 Chicago, IL, USA (April 23, 2012) /PRNewswire-USNewswire/ — On May 25, 2012, take a tour of the Universe like no other at the Adler Planetarium. Welcome to the Universe is the next adventure departing from the Grainger Sky Theater, one of the most technologically advanced theaters in the world. In Welcome to the Universe, audiences travel a billion light-years and back flying through space, orbiting the Moon, zooming into a canyon on Mars, and soaring through the cosmic web where a million galaxies shower down on them. Then it’s back to Earth, traveling faster than the speed of light in one of the most immersive space experiences ever created. Welcome to the Universe will run daily through May 3, 2013.

In Welcome to the Universe, visitors become space adventurers and set off on a journey to discover our Universe in a way never done before. The live, guided tour of the Universe is presented in the transformed Grainger Sky Theater, which was designed with leading-edge technologies that enable the visitors to explore space as if they were there.

Welcome to the Universe was created utilizing real telescopic data and the best scientific imagery presented with a stunning level of realism. The Grainger Sky Theater offers the largest single, seamless digital image in the world with an ultra high definition screen resolution of more than 8k x 8k pixels. The on-screen visuals expand beyond the traditional 180-degree dome and surround the visitor creating an immersive space experience.

“This new adventure gives us the opportunity to showcase what our state-of-the-art theater can do,” said Adler President Paul Knappenberger Jr., PhD. “The Grainger Sky Theater is not just a theater, it is a space simulation environment that has the ability to view the Universe from any time, place or distance. The Adler is the only place in the world where audiences can have this one-of-a-kind, experience.”

Welcome to the Universe begins with a survey of the night sky, zooming out into space to observe the surface of the dynamic planet Earth. Using current satellite data, the show’s tour guide will zoom back into several places on Earth that are experiencing dramatic environmental activity such as a forest fire, an active volcano, or unique cloud formations. Then it’s off for a tour of the rest of the Solar System and beyond! Discover the achievements – and limitations – humans have experienced in space exploration. Along the way, there are stops at familiar exploration milestones – from the International Space Station where humans continue to explore and monitor the Earth; to the Moon, the farthest place humans have traveled; to Mars, the current focus of robotic exploration. Telescopes enable scientists to see billions of light-years away, and new visualizations based on the Sloan Digital Sky Survey – the largest map of the Universe – allows the audience to see the newest, most accurate and realistic positioning of galaxies that exist as they travel deeper and deeper into space.

“Welcome to the Universe invites visitors to virtually fly into natural phenomena, such as the recent Red Sea volcano, and experience a close-up view of how climate change is affecting our planet,” said Mark SubbaRao, Ph.D., Adler astronomer and show creator. “Up-to-the-minute scientific data about everything from earthquakes to tsunamis will be examined as they occur and will be part of the show. Anything that happens in the Universe is a possible focus. Nothing is off limits.”

The show, which will be updated weekly as the newest data becomes available, provides Adler visitors with an exclusive, first look at changes occurring in Earth and space science.

SubbaRao, who also serves as the director of the Adler’s Space Visualization Lab, was a member and builder of the Sloan Digital Sky Survey. He utilized data from that groundbreaking project to create the unique, breathtaking visualizations in Welcome to the Universe .

“The public has seen maps and images of space before, but the Grainger Sky Theater’s fly-through technology sets the stage for a unique experience that will change as the scientific data changes,” according to SubbaRao. “Much like the Universe, the show will constantly evolve.”

The awesome journey continues as the audience soars through the Pleiades and M3 star clusters on their way out of the galaxy. The breathtaking Milky Way occupies the full screen and then fades away into the distance. The Universe is so vast that the Milky Way soon appears as a small white dot among dozens of other galaxies. As the focus becomes even broader, the audience catches a glimpse of part of the super structure that spans the entire Universe – a cosmic web of a million galaxies. It is the skeleton of the Universe. As they begin to contemplate their place in the Universe, a moment of utter awe overtakes the audience. There is a pause before a million galaxies shower down on the audience as they travel a billion light-years back to Earth, moving faster than the speed of light.

About the Adler Planetarium
The Adler Planetarium – America’s First Planetarium – was founded in 1930 by Chicago business leader Max Adler. A recognized leader in public learning, the Adler inspires young people – particularly women and minorities – to pursue careers in science, technology, engineering and math. Scientists, historians and educators at the museum inspire the next generation of explorers.  www.adlerplanetarium.org

Joe Kleimanhttp://wwww.themedreality.com
Raised in San Diego on theme parks, zoos, and IMAX films, InPark's Senior Correspondent Joe Kleiman would expand his childhood loves into two decades as a projectionist and theater director within the giant screen industry. In addition to his work in commercial and museum operations, Joe has volunteered his time to animal husbandry at leading facilities in California and Texas and has played a leading management role for a number of performing arts companies. Joe previously served as News Editor and has remained a contributing author to InPark Magazine since 2011. HIs writing has also appeared in Sound & Communications, LF Examiner, Jim Hill Media, The Planetarian, Behind the Thrills, and MiceChat His blog, ThemedReality.com takes an unconventional look at the attractions industry. Follow on twitter @ThemesRenewed Joe lives in Sacramento, California with his wife, dog, and a ghost.
Share
Facebook
Twitter
Linkedin
Email
Print
WhatsApp
Pinterest
ReddIt
Tumblr
Previous articleInternational Fireworks Competition Returns to Hannover
Next article4D Comes of Age, Part Two: Airboat Adventure at the Museum of Discovery & Science