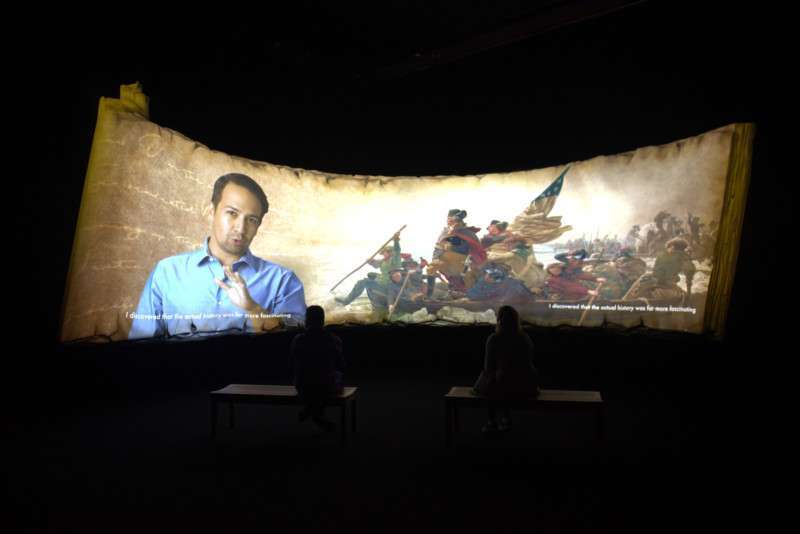 The smash hit musical “Hamilton” continues to pack theaters worldwide. The creators of the musical partnered with manufacturers, integrators and historians to create the traveling showcase, “Hamilton: The Museum Exhibition.”  A complement of Alcorn McBride equipment supported the immersive exhibition, which combined art, history, drama and education to tell the story of Alexander Hamilton and the American Revolution.

Design Electronics (DE) in Niagara Falls, Ontario served as the project’s integrator working with John Norman on system design.  The exhibition recreated a series of rooms and scenes highlighting key events in Hamilton’s life many of which are depicted in the musical.  Several theaters also provided visitors with a deeper dive into Hamilton’s life and times.

In the Entry Theater, DE projection mapped content developed by Cortina Productions, spotlighting Hamilton the man and the exhibition to come, on a curved screen custom fabricated to look like a scroll of paper.  At the conclusion of the exhibition visitors were treated to a dynamic scene from the musical itself displayed on a large silver screen in the 3D Theater.  In between visitors also explored an interactive table detailing the decisive battle of Yorktown and toured a revolutionary-era portrait gallery come to life.

DE selected Alcorn McBride equipment for the Entry Theater and 3D Theater; DE has focused on using Alcorn gear for exhibitions starting with the King Tut show in 2003.

The flexibility of Alcorn McBride’s 32-track A/V Binloop audio and video player enabled it to serve both theaters providing 2 channels of audio for the Entry Theater and 3 channels for the 3D Theater.  The V16Pro show controller kept theater audio and video in sync.

“We had an extremely tight schedule for the exhibition with so much construction required for the venue and the show, so we were not able to test equipment prior to deployment on site,” recalls Felice Taddeo, DE’s Manager of Technical Services.  “Having a comfort level with Alcorn McBride from our past partnerships was really important.  I knew Alcorn had my back.”

While the control process had to deliver complex results, it needed to be easy to learn and operate, he notes.  Taddeo reports that the V16Pro was “simple to program and its integration with Crestron was seamless.”

Joe Kleimanhttp://www.themedreality.com
Raised in San Diego on theme parks, zoos, and IMAX films, Joe Kleiman would expand his childhood loves into two decades as a projectionist and theater director within the giant screen industry. In addition to his work in commercial and museum operations, Joe has volunteered his time to animal husbandry at leading facilities in California and Texas and has played a leading management role for a number of performing arts companies. Joe has been News Editor and contributing author to InPark Magazine since 2011. HIs writing has also appeared in Sound & Communications, LF Examiner, Jim Hill Media, and MiceChat. His blog, ThemedReality.com takes an unconventional look at the attractions industry. Follow on twitter @themedreality Joe lives in Sacramento, California with his fiancé, two dogs, and a ghost.
Share
Facebook
Twitter
Linkedin
Email
Print
WhatsApp
Pinterest
ReddIt
Tumblr
Previous articleaufwind Group creates an alpine 5D cinema with AV Stumpfl’s PIXERA
Next articleKatmandu Group partnering with Falcon’s Creative on new theme park in Dominican Republic