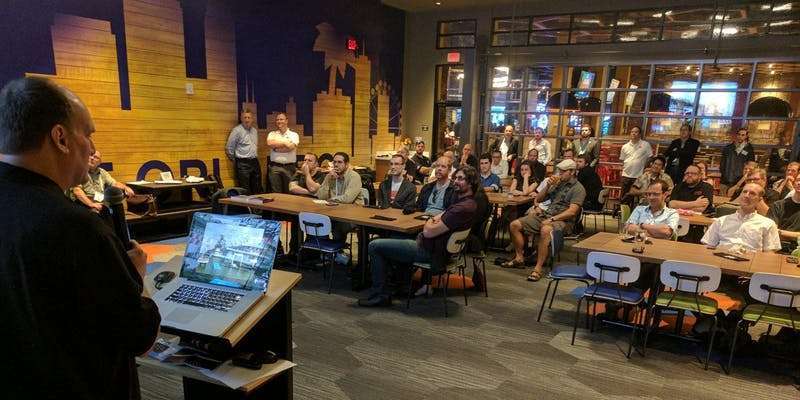 ABOVE: Attendees at the 2017 Geekout in Orlando included InPark News Editor Joe Kleiman

Alcorn McBride will show the latest version of its show control software, WinScript Live 5, at InfoComm 2019 and will host John Huntington and Jim Janninck’s Show Control Geekout: Special Time Code Edition at the company’s new Orlando headquarters. Alcorn McBride can be found at Booth 2849 in the Orange County Convention Center in Orlando, June 12-14.

The InfoComm introduction of WinScript Live 5 showcases new features and functionality for the programming software and touch interface for Alcorn McBride’s expanding line of show controllers.  The software is available for free download on the company’s website: www.alcorn.com.

WinScript Live 5 offers many improvements that make it even easier to build new attractions.  Now, with just a few clicks, users can deploy show control and media content to entire fleets of RidePlayer-based vehicles with ease.  New features, such as the ‘Device’ variable type, enable simplified control and monitoring of the RidePlayer fleet within Alcorn McBride’s new V16X show controller.  The powerful software reinforces the company’s commitment to provide an ecosystem of off-the-shelf tools that empower industry professionals to create world-class attractions.

John Huntington and Jim Janninck’s Show Control Geekout: Special Time Code Edition for InfoComm attendees is back this year and will be held in the training facility at Alcorn McBride’s new headquarters in MetroWest Orlando.  Huntington will give an introductory presentation on time code and show synchronization then moderate a discussion addressing topics such as: Do we still need SMPTE time code?  What are its advantages and drawbacks?  Can we just sync systems and let them run wild?  What about PTP?  Can we put time code on a network?  What about SMPTE’s new TLX effort?  What is the future of time-based synchronization?

The Geekout will be held June 13th from 6-7.30 p.m.  Social activities following the session will be announced shortly.  The event is free and open to anyone interested in show control.  More information can be found on the blog at controlgeek.net.

The Geekout will be the first event held at Alcorn McBride’s new headquarters.  Earlier this year, the company moved to a larger building which more than doubled the space for the growing business.  The new building features a warehouse, quality and test facility, engineering lab and a large training facility.  Alcorn McBride is well known for fostering a culture of camaraderie, and the staff-friendly environment includes a game room, gym, dog play area and fully-themed, media-rich Tiki Bar.