Orlando, FL, USA (February 3, 2015) – Alcorn McBride is pleased to announce that Justin Ruka has joined the company as a Support Technologist.  His hiring follows other recent additions to the growing staff roster at Alcorn McBride, the leading manufacturer of show control, audio and video equipment for the themed entertainment. 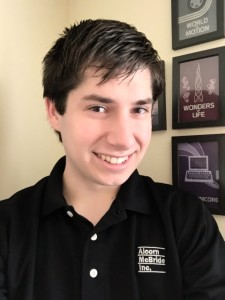 Scott Harkless, Alcorn McBride’s Director of Sales, met Justin at an event held by the Themed Entertainment Association (TEA).  The TEA is an international non-profit association representing the world’s leading creators, developers, designers and producers of compelling places and experiences.  Justin was a member of the association’s NextGen program which helps students and recent graduates break into the industry.

“We are very happy to welcome Justin on board,” says Harkless.  “He has the perfect combination of personality and talent, making him an ideal match for our unique company culture.  We are grateful to the TEA for making this connection and expect him to be a big asset to our team.”

A 2013 graduate of Lakeland College with a B.A. in Computer Science, Ruka worked in a number of positions at the Walt Disney World Resort in Orlando before joining Alcorn McBride as a Software Engineering intern last fall.  His internship led to his full-time appointment as Support Technologist.

As a self-described creative technologist and futurist who loves the themed entertainment industry, Ruka says his new post combines many of his favorite pursuits.  “After graduation, I had hopes of making my way into a creative, technology-oriented role in the themed entertainment industry,” he says.  “I’ve had the opportunity to work in one of the most visited entertainment destinations in the world, Walt Disney World Resort, and I was privileged to be on the opening operational team of ‘Harry Potter and the Escape from Gringotts’ in Diagon Alley at Universal Studios Florida.  Now, I’m proud to have joined the wonderful and talented team at Alcorn McBride.

“Technology is the perfect complement to my fascination with the themed entertainment industry, as it is being used more and more in both high-end destination and local attractions.”

Joe Kleimanhttp://wwww.themedreality.com
Raised in San Diego on theme parks, zoos, and IMAX films, Joe Kleiman would expand his childhood loves into two decades as a projectionist and theater director within the giant screen industry. In addition to his work in commercial and museum operations, Joe has volunteered his time to animal husbandry at leading facilities in California and Texas and has played a leading management role for a number of performing arts companies. Joe has been News Editor and contributing author to InPark Magazine since 2011. HIs writing has also appeared in Sound & Communications, LF Examiner, Jim Hill Media, and MiceChat. His blog, ThemedReality.com takes an unconventional look at the attractions industry. Follow on twitter @ThemesRenewed Joe lives in Sacramento, California with his fiancé, two dogs, and a ghost.
Share
Facebook
Twitter
Linkedin
Email
Print
WhatsApp
Pinterest
ReddIt
Tumblr
Previous articleCHINA DISPATCH: Chimelong and Wanda Group Enter Next Stages of Expansion
Next article“The Hunger Games: The Exhibition” Designed by Thinkwell to Premiere July 1 in New York