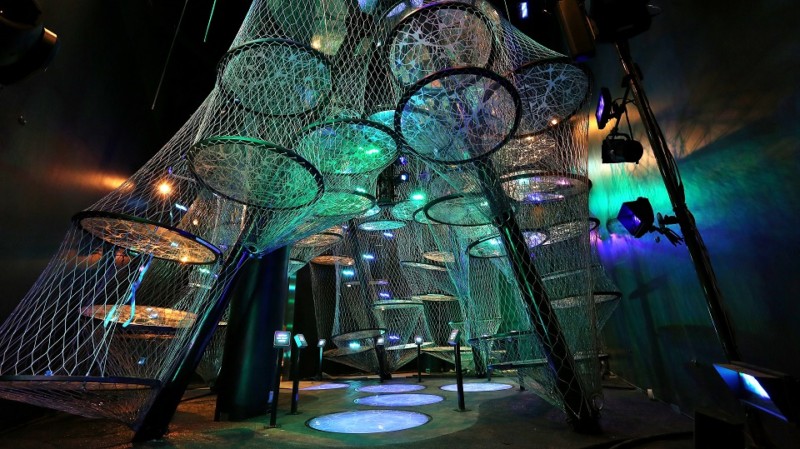 [quote]Alcorn McBride really is the gold standard. And the company is spot on in terms of customer service. They are always responsive and understand the kind of deadlines and last-minute decisions that get made. Alcorn McBride is one of my go-to manufacturers” — Steve Prado, Senior Project Manager at ELS[/quote]

Orlando, FL, USA – Philadelphia’s Franklin Institute recently opened the most significant expansion in the museum’s history. Alcorn McBride’s ProTraXX and VCore controller played key roles in “Your Brain,” a high profile, permanent exhibition. Entertainment Lighting Services (ELS), a leading supplier and integrator of lighting and staging equipment, as well as a full range of production services, provided the gear for the signature exhibit housed in The Nicholas and Athena Karabots Pavilion.

“Your Brain” is the largest exhibition in the country dedicated to the most complex and misunderstood vital organ in our bodies. It features more than 70 interactive experiences, including a two-story climbing structure that simulates a neural network with dynamic lighting and sound effects triggered by footsteps. A Street Scene area enables visitors to travel through a scenario filled with multi-sensory information and scenes from everyday life. 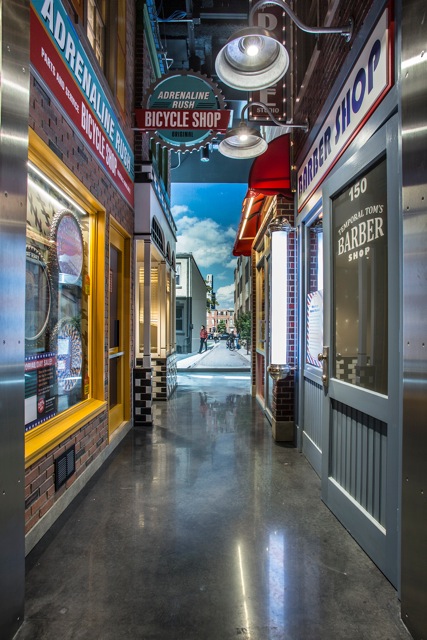 ELS was brought in by the design firm Available Light to furnish lighting and audio integration for the Neural Climb and Street Scene areas of “Your Brain.” Selecting Alcorn McBride equipment was a no-brainer for Steve Prado, Senior Project Manager at ELS, who has specified Alcorn products a number of times. “From a show control trigger and front-end perspective Alcorn is always my first choice. They have great equipment and clearly have been through everything, so I know they’ll be familiar with anything I do. That was validated by The Franklin Institute’s tech crew: When they saw our rack they recognized Alcorn McBride and thought it was perfect. That was great from a maintenance service standpoint – I wasn’t bringing in an unknown manufacturer.”

Street Scene takes visitors on a walk down a small-town Main Street where they see and hear typical sights and sounds. “Alcorn McBride’s ProTraXX supplies audio effects playback on a loop that the sound designer Karin Graybash and ELS tech Chuck Schoon worked through and programmed,” says Prado. “It’s a pretty straightforward application” for the compact, solid-state MP3 playback unit. 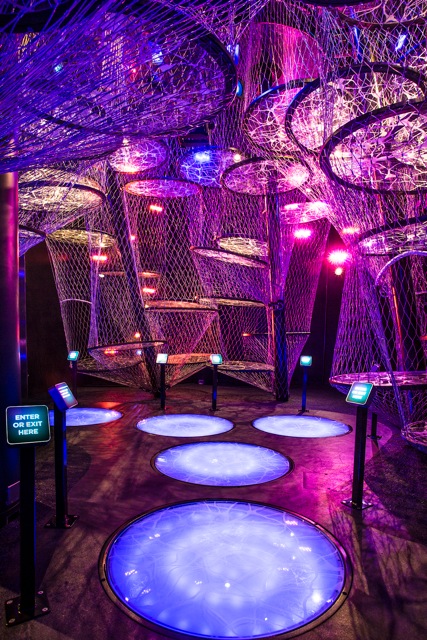 “The lighting and sound effects incorporated into the Neural Climb immerse the visitor and reinforce the concept that the brain is a very active place. It demonstrates the complexities of what goes on in your brain,” Prado says. “The space is like a voyage inside the brain, walking through and seeing synapses trigger and fire. There are five glass disks mounted on the floor and when you stand on them your footsteps trigger a series of lighting and audio cues. By using a VCore controller we can shuffle the cues randomly. When you stand on a trigger it’s not specific to the location, it’s random. The intent was to create a non-repetitive perception of the fact that nothing ever happens twice – and it’s been very successful in its implementation.”

Prado reports that the system is working well.

Located in the heart of Philadelphia, The Franklin Institute is renowned as a leader in the field of science and technology learning and is Pennsylvania’s most visited museum. The new 53,000-square foot, $41 million Nicholas and Athena Karabots Pavilion, named for its lead donors, opened to the public on June 14. The Frank Baldino, Jr. Gallery in the Nicholas and Athena Karabots Pavilion houses the museum’s largest permanent exhibition, “Your Brain,” plus a traveling exhibition gallery, and a conference and education center.

Joe Kleimanhttp://wwww.themedreality.com
Raised in San Diego on theme parks, zoos, and IMAX films, InPark's Senior Correspondent Joe Kleiman would expand his childhood loves into two decades as a projectionist and theater director within the giant screen industry. In addition to his work in commercial and museum operations, Joe has volunteered his time to animal husbandry at leading facilities in California and Texas and has played a leading management role for a number of performing arts companies. Joe previously served as News Editor and has remained a contributing author to InPark Magazine since 2011. HIs writing has also appeared in Sound & Communications, LF Examiner, Jim Hill Media, The Planetarian, Behind the Thrills, and MiceChat His blog, ThemedReality.com takes an unconventional look at the attractions industry. Follow on twitter @ThemesRenewed Joe lives in Sacramento, California with his wife, dog, and a ghost.
Share
Facebook
Twitter
Linkedin
Email
Print
WhatsApp
Pinterest
ReddIt
Tumblr
Previous articleAndrew Reiff of Penn State Named 2014 Winner of Spot Experiential Scholarship
Next articleSEGD Exhibition & Experience Design Workshop August 21-22 Washington DC