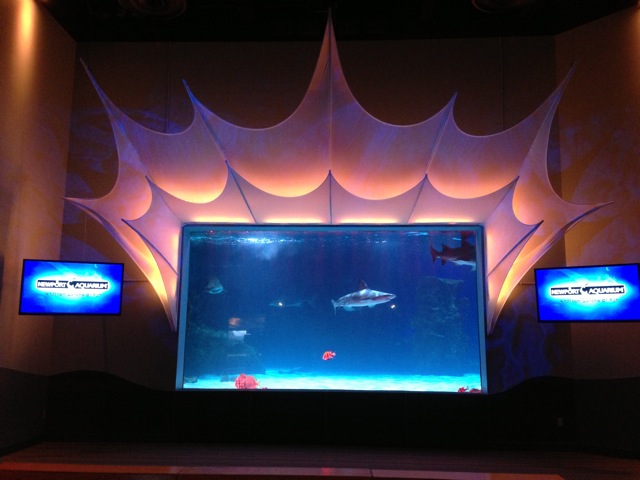 The Shark Ray Bay Theater is a visitor favorite serving as the venue for a variety of underwater dive-based shows.  Its central focal point is one of the aquarium’s largest water tanks with a visible viewing area of approximately 17×9 feet.  It formerly had a pirate-themed décor.  The retooling by Full Spectrum transformed the theater into a clean, streamlined space that’s adaptable and versatile, adding value to the aquarium’s private special event capabilities.

A lightweight fabric mesh was hung, in a stylized crashing wave design, as a new visual backdrop (“splash curtain”) for the tank and installed color-changing LED fixtures and moving lights.  Two 60-inch LG LED displays now flank the tank.  A 47-inch LG LED display serves as a marquee at the front of the theater. 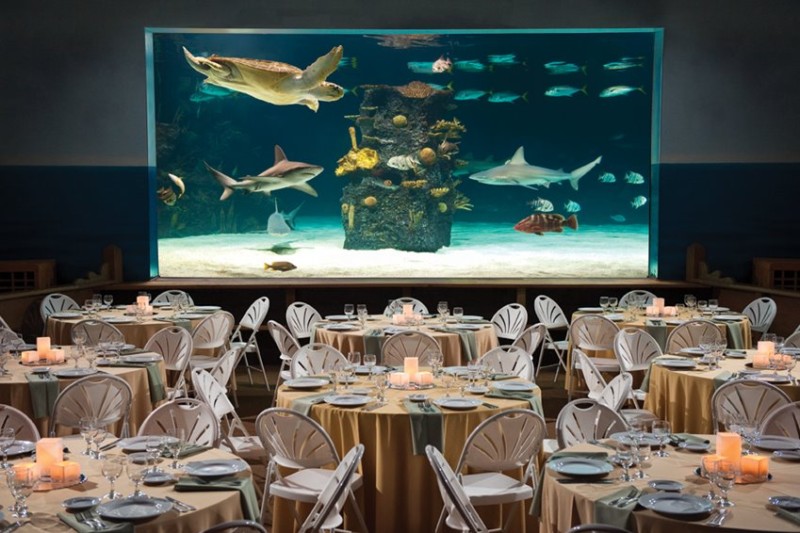 Full Spectrum overhauled the theater’s audio system, installing smaller speaker cabinets and new speakers above the splash curtain.  All the audio processing is now done through a central touchscreen control system, which permits the creation of separate zones within the space and controls the volume for the program audio and individual microphones.

“Alcorn McBride’s V4 Pro controller essentially runs the whole theater.  It’s in charge of lighting, audio, video – it’s the heart of the whole system,” says Chad Kuney, VP of Operations at Full Spectrum.  “We chose the V4 Pro simply because the aquarium is open seven days a week, nine hours a day.  We needed a controller that was robust and would operate without a glitch.  The V4 Pro has proven to be that type of gear.”

He notes that the presenter of the dive shows is able to control the V4 Pro with an iPad using Alcorn McBride’s ShowTouch for iOS.  “The presenter can walk around with an iPad and control videos, lighting cues, adjust the volume of audio – all on the fly,” Kuney explains.  “If they see an animal float by in the tank they can run a video on the fly about that animal.  And the divers can speak from within the tank with some mic equipment.  It’s very cool!”

Alcorn McBride’s DVM8400 runs all the video elements.  “It works perfectly,” Kuney says.  “It’s solid state, which is great.  And it’s easy to change out videos, too.”

The flexibility of the Alcorn McBride equipment is key to the new theater’s usage.  “The aquarium wanted a space that was very versatile so that in addition to the dive shows they could host parties, corporate events, dinners, proms.  It’s really a multi-purpose facility now.  What’s great about the Alcorn gear is that we can program it to adapt to so many situations – it enables us to completely transform the space.  It also allows us to put muscle into the creativity and make sure our creative touch is on top of the situation.”

Joe Kleimanhttp://wwww.themedreality.com
Raised in San Diego on theme parks, zoos, and IMAX films, InPark's Senior Correspondent Joe Kleiman would expand his childhood loves into two decades as a projectionist and theater director within the giant screen industry. In addition to his work in commercial and museum operations, Joe has volunteered his time to animal husbandry at leading facilities in California and Texas and has played a leading management role for a number of performing arts companies. Joe previously served as News Editor and has remained a contributing author to InPark Magazine since 2011. HIs writing has also appeared in Sound & Communications, LF Examiner, Jim Hill Media, The Planetarian, Behind the Thrills, and MiceChat His blog, ThemedReality.com takes an unconventional look at the attractions industry. Follow on twitter @ThemesRenewed Joe lives in Sacramento, California with his wife, dog, and a ghost.
Share
Facebook
Twitter
Linkedin
Email
Print
WhatsApp
Pinterest
ReddIt
Tumblr
Previous articleWhiteWater Supplies Slide Complex with Unique Features to Atlantis The Palm in Dubai
Next articleTrue 4K 3D From Qube Cinema Installed by D3D at Air Force Museum