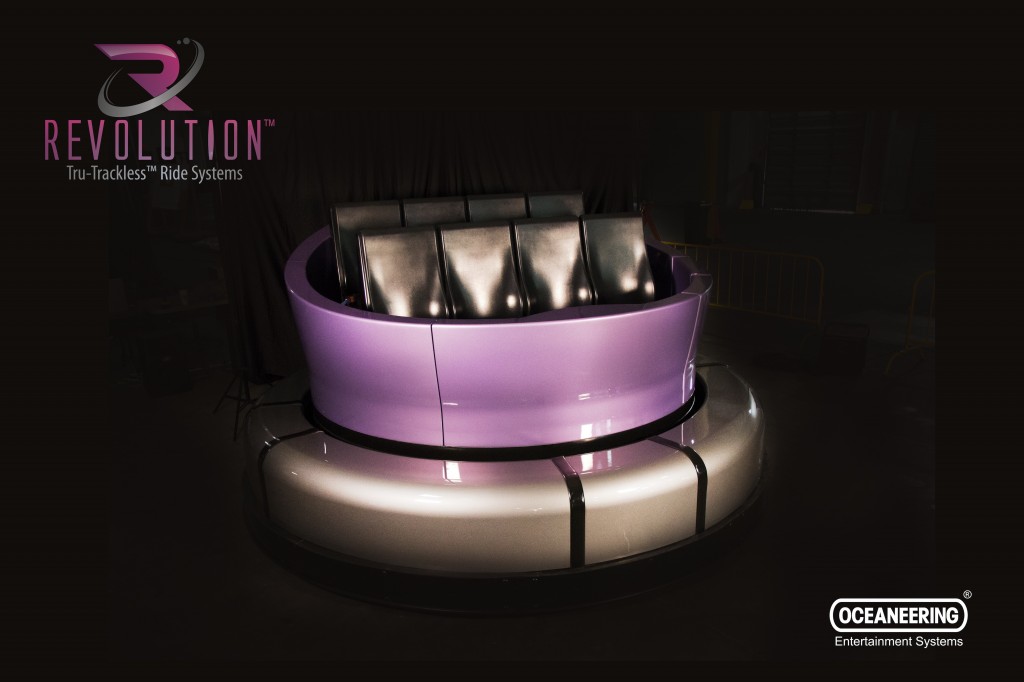 OES is known for its cutting-edge development of theme park technologies, including dark ride vehicles, show-action systems and an array of custom solutions.  The company’s latest revolutionary innovation is a ride system like none other.  REVOLUTION is a “Tru-Trackless” system in which ride vehicles are able to glide around a show space in any direction, stop and turn at will, and provide a full motion base experience for the audience.  Vehicles can follow multiple ride paths, have multiple motion profiles, and dispatch from load and unload stations in first available order.

“We chose Alcorn McBride’s RideTraXX as the 5.1 audio playback unit for the REVOLUTION system,” says Matthew Kent, head of creative services at OES.  “At IAAPA Attractions Expo 2013 we’re also using VCore to trigger some show control specifics.  We want to be able to walk up to the vehicle at the show and turn it on or off and access specific elements of the demonstration profile.  REVOLUTION is designed to be put into an attraction on a continuous cycle of show control.  VCore allows us to create a single motion profile for trade show demonstrations purposes with a Touch iOS interface that Alcorn is providing as well.”

During the demo Kent says OES will deploy RideTraXX for “off-board audio so that it can be heard throughout the booth rather than from within the ride, since we won’t have people in the vehicle, however it will be operational and controllable via the touchscreen.”

OES turned to Alcorn McBride for the REVOLUTION demo as a tried-and-true solutions provider.  “Alcorn was already the provider of the audio system we chose for this product for all of our customers,” says Kent.  “RideTraXX is versatile and offers all the inputs and outputs that we require, and it’s very easy to maintain and use. The Compact Flash card interface makes it simple to change show audio media on the fly.”

The REVOLUTION vehicle system may be used not only for passenger ride systems but also for other entertainment applications, such as moveable scenic, animation or show-action platforms.

Joe Kleimanhttp://wwww.themedreality.com
Raised in San Diego on theme parks, zoos, and IMAX films, Joe Kleiman would expand his childhood loves into two decades as a projectionist and theater director within the giant screen industry. In addition to his work in commercial and museum operations, Joe has volunteered his time to animal husbandry at leading facilities in California and Texas and has played a leading management role for a number of performing arts companies. Joe has been News Editor and contributing author to InPark Magazine since 2011. HIs writing has also appeared in Sound & Communications, LF Examiner, Jim Hill Media, and MiceChat. His blog, ThemedReality.com takes an unconventional look at the attractions industry. Follow on twitter @ThemesRenewed Joe lives in Sacramento, California with his fiancé, two dogs, and a ghost.
Share
Facebook
Twitter
Linkedin
Email
Print
WhatsApp
Pinterest
ReddIt
Tumblr
Previous articleSherry Kraynak Joins Hayward Turnstiles as Global Sales Manager
Next articleTivoli to Open New Hotel with Arp-Hansen Group in 2016