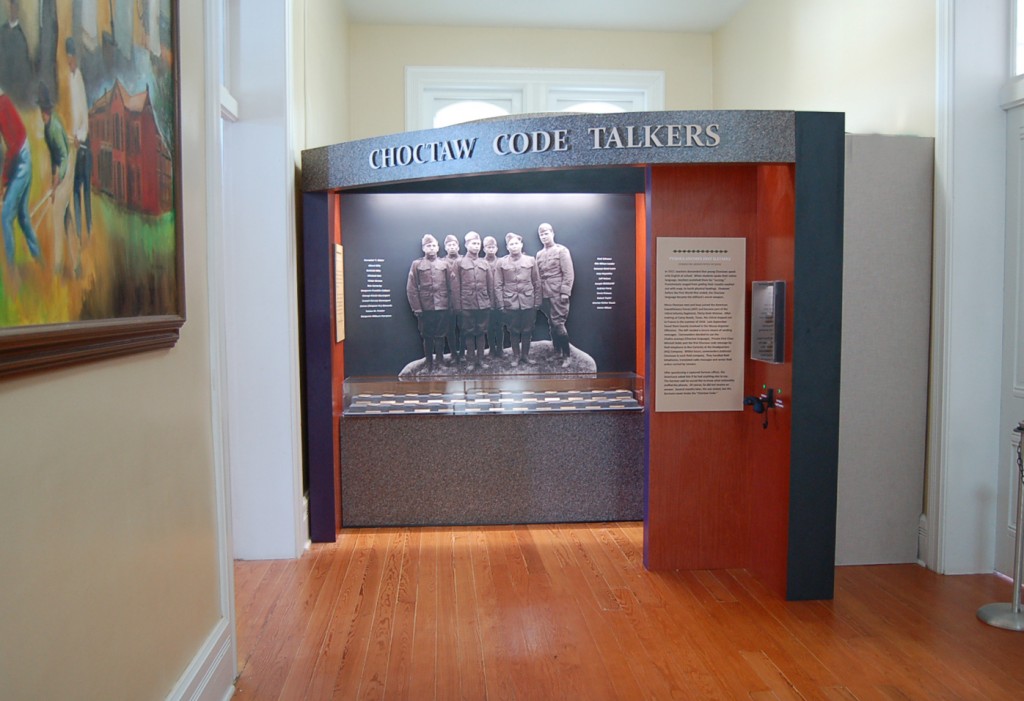 Orlando, FL, USA — The role of the Choctaw Codetalkers has been lost to history until recently, and a new exhibit at the Choctaw Nation of Oklahoma Capitol Museum in Tuskahoma brings their exciting story to light with support from Alcorn McBride’s Digital Video Machine HD DVM8500 video player and Digital Audio Machine AM4 A/E professional digital audio player.

A refurbished gallery in the museum is dedicated to “the original Codetalkers,” members of the Choctaw Nation who served in the 142nd and 143rd Infantry Regiments of the American Expeditionary Forces in World War I.  More than 20 years before the celebrated Navajo Codetalkers of World War II, these soldiers used the Choctaw language to foil the Germans who were intercepting allied communications on the western front in 1918.  Discouraged from speaking their native language at home, the Choctaw were credited with helping to ensure an allied victory during the war.

The gallery features a kiosk with a 55-inch screen that displays a 20-minute video about the Codetalkers told through archival imagery and the recollections of their descendants.  Push buttons activate the video, and a “field telephone” with buttons enables visitors to listen to Choctaw field commands and an English translation.  Alcorn McBride’s DVM8500 operates the video display while the Digital Audio Machine AM4 A/E, with built-in amp, operates the phone.

Ko-Kwow Arts and Exhibits constructed the exhibit and Media Matrix installed all the components for audio and video playback here at the North Bend facilities of Ko-Kwow.  The company previously partnered with Alcorn McBride on the permanent exhibition at the Luhr Jensen & Sons Gallery at The History Museum in Hood River, Oregon.

“Once again we turned to Alcorn McBride equipment for reliability and ease of operation,” says Media Matrix owner Vinnie Cavarra.  “In addition, everyone at the company has been wonderful to work with and helpful with any and all technical issues.”

The exhibit designers for the Choctaw Codetalkers were Larry Watson and Peggy O’Neal of Ko-Kwow, North Bend, Oregon.

Joe Kleimanhttp://wwww.themedreality.com
Raised in San Diego on theme parks, zoos, and IMAX films, InPark's Senior Correspondent Joe Kleiman would expand his childhood loves into two decades as a projectionist and theater director within the giant screen industry. In addition to his work in commercial and museum operations, Joe has volunteered his time to animal husbandry at leading facilities in California and Texas and has played a leading management role for a number of performing arts companies. Joe previously served as News Editor and has remained a contributing author to InPark Magazine since 2011. HIs writing has also appeared in Sound & Communications, LF Examiner, Jim Hill Media, The Planetarian, Behind the Thrills, and MiceChat His blog, ThemedReality.com takes an unconventional look at the attractions industry. Follow on twitter @ThemesRenewed Joe lives in Sacramento, California with his wife, dog, and a ghost.
Share
Facebook
Twitter
Linkedin
Email
Print
WhatsApp
Pinterest
ReddIt
Tumblr
Previous article
Mountain Peaks to be Restored to Tivoli’s Famed Coaster
Next article
Smoky Mountain Christmas Festival Returns to Dollywood with New Production of A Christmas Carol