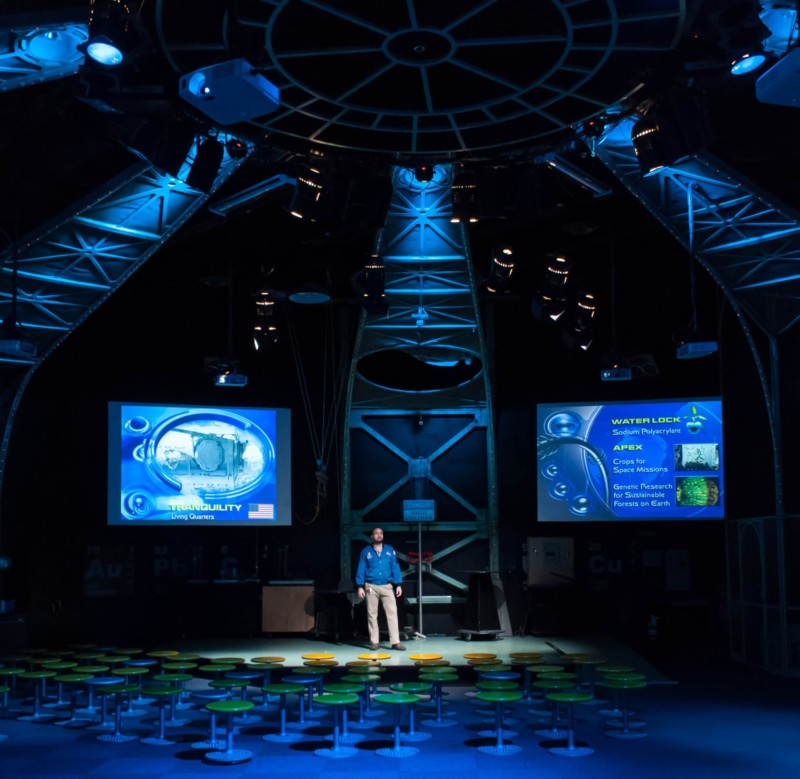 Carnegie Science Center is dedicated to educating, entertaining and inspiring through programs in science, sports and technology.  The Works Theater showcases dazzling demonstrations in a one-of-a-kind industrial setting.

“The theater has been a multimedia space for cutting-edge technologies for more than 20 years, but when its automation equipment started dying and was no longer supported by the manufacturer we began to look for a replacement,” says Doug DeHaven, AV specialist/robotics at Carnegie Science Center.  “There didn’t seem to be much on the market that allowed us to automate a theater like we did.  Many of the systems out there were expensive and custom-built.  But we happened to have an exhibit that featured Alcorn products; it had been working for four years with no issues.  So we researched the company, talked to a few Alcorn engineers who were fantastic and ordered the V16 Pro for the theater.”

According to DeHaven, Alcorn McBride’s V16 Pro was “unheard of in this market,” where “a lot of show controllers are very fixed in terms of what they do: It’s difficult to make live, last-minute decisions with them” for live events in the theater.

DeHaven decided to pair the “robust hardware” of the V16 Pro with “easy programming” of QLab software as the multimedia cueing platform.  “Our theater has a lot of hardware,” he explains.  “We have a 100-year old 10-foot tall, 1.2 million volt Tesla Coil that we need to control.  We also have a liquid nitrogen fog machine that takes a lot of control to make it work right.  Plus two pan-tilt-zoom cameras and eight video projectors for the screens that ring the theater.  We need to run their content and turn the projectors on and off.” 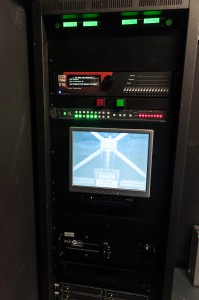 DeHaven designed the system so the V16 Pro acts as the back end for QLab and allows it to work dynamically with commercial gear as well as the AV equipment.  “Alcorn and QLab make a perfect combination,” he says.  “We use the V16 Pro to interface with our original controls, which are based on MIDI commands.  For example, if the fire alarm goes off, it tells the V16, which will shut everything down.  We did a touch interface – Alcorn McBride software is amazing.  The display output is very helpful as it keeps track of all commands. The system is also set up so we can just use the V16 on its own as a live room console.”

He reports that he had “all the V16 stuff working before anything else.  It’s very easy to use, and Alcorn manuals are amazing.  I never had a company work so well with us.”

DeHaven believes that The Works Theater “may be using the V16 Pro in a way very few other Alcorn customers do.  We not only wanted the reliability and interfacing capability of Alcorn equipment but also the ability to make realtime show control changes for live events – we have multiple different shows in one space throughout the day.  So I found a way to marry Alcorn and QLab products to accomplish this.”

He notes that, “of all the vendors I have worked with, Alcorn McBride stands out as one of the best companies ever from the design of the equipment to the friendly and knowledgeable staff and the great little details in the manuals.  Overall, it has been a fantastic experience.  In the future, I’ll choose only Alcorn McBride products.  I’m now a life-long customer!”

DeHaven specified, designed and installed the show control system and infrastructure and programmed the V16 Pro and touch interface.  He also designed the communication protocol between the devices and systems.  Dave Hart, in lighting and sound, handled the QLab show creation.  Electrician Rick Kwiatkowski helped get the wiring infrastructure in place that permitted control of the Tesla Coil and liquid nitrogen fog machine.

Joe Kleimanhttp://wwww.themedreality.com
Raised in San Diego on theme parks, zoos, and IMAX films, InPark's Senior Correspondent Joe Kleiman would expand his childhood loves into two decades as a projectionist and theater director within the giant screen industry. In addition to his work in commercial and museum operations, Joe has volunteered his time to animal husbandry at leading facilities in California and Texas and has played a leading management role for a number of performing arts companies. Joe previously served as News Editor and has remained a contributing author to InPark Magazine since 2011. HIs writing has also appeared in Sound & Communications, LF Examiner, Jim Hill Media, The Planetarian, Behind the Thrills, and MiceChat His blog, ThemedReality.com takes an unconventional look at the attractions industry. Follow on twitter @ThemesRenewed Joe lives in Sacramento, California with his wife, dog, and a ghost.
Share
Facebook
Twitter
Linkedin
Email
Print
WhatsApp
Pinterest
ReddIt
Tumblr
Previous article
Heide Park Resort’s New Operations Director Starts Off New Season of “Undercover Boss”
Next article
Audubon Nature Institute and San Diego Zoo Global Break Ground on Innovative Breeding Center