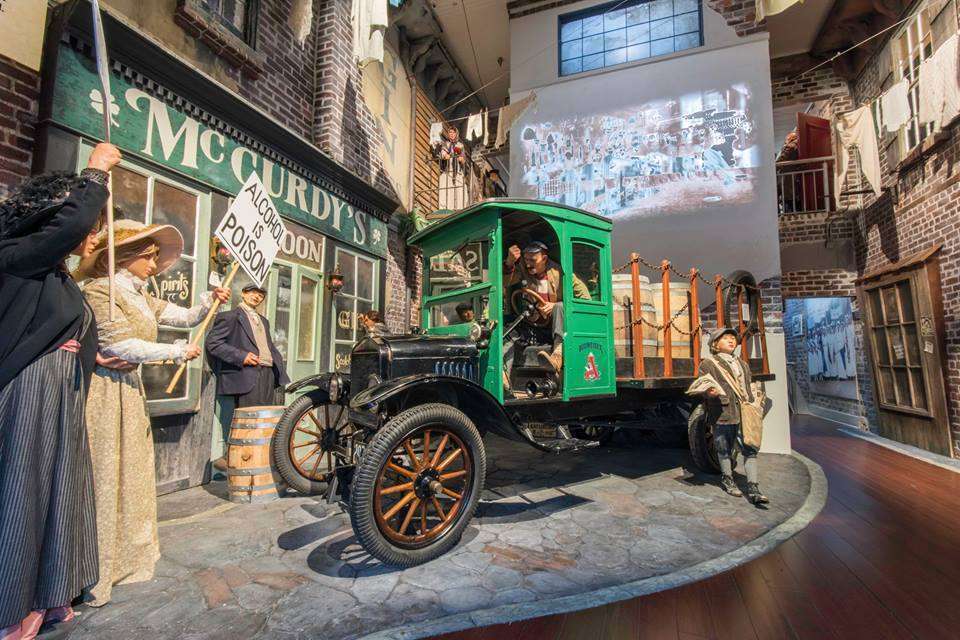 Prohibition was in force in the US for just 13 years, but its impact on American history reverberated throughout the 20th century.  Now, the country’s only Prohibition museum has opened in Savannah, Georgia bringing to life the momentous 1920s and ‘30s with 13 immersive galleries on two floors. An Alcorn McBride A/V Binloop HD handles all of the video playback throughout the museum.

Located next to Ellis Square, The American Prohibition Museum occupies a 5,500 square-foot space in the popular City Market.  More than 20 exhibits – and an authentic speakeasy – trace the history of the Temperance Movement, the ratification of the 18th amendment to prohibit alcohol production and sale in the US in 1920, the rise of gangsters and gunrunners, moonshine making, the advent of flappers and the repeal of the notorious amendment in 1933.

Attraction designer Ryan McCurdy performed the full AV design and install for the museum for Historic Tours of America.  “The museum is a linear, self-guided attraction with live actors and multimedia content,” he explains.  “Visitors follow a chronological path through history although there are moments when their tour can be diverted by the actors!”

To pack a lot of history and the look and feel of the Roaring ‘20s into a relatively small space, the museum ingeniously combines traditional reader rails and artifacts with experiential technology.  “There are extensive soundscapes and music scapes in street scenes, speakeasies, even NASCAR engines revving to give a full impression of lights, sound and music,” says McCurdy.   “Archival footage is also displayed throughout in the connecting hallways.”

Overall, actors and video are featured “where they make the most sense,” McCurdy notes.  “Actors are able to adapt their dialogue based on the visitors.  The museum has gotten great reviews for its unique approach.”

McCurdy chose an Alcorn McBride A/V Binloop HD frame-accurate synchronized audio and video player for all the playback in the museum.  “We wanted a system that didn’t have any moving parts,” he notes.  “We can buy as many cards as we need and upscale at any time without wasting technology.  Binloop is the king of the install.”

Among the content that the Binloop runs are five prestige effects that McCurdy says are “intended to stop visitors in their tracks.”  The effects are 4K life-size, talking portraits, which are designed to communicate with the live actors, other portraits and additional effects in a frame-accurate synchronization.  For example, a moonshiner appearing on a 75-inch monitor has 90 seconds of dialogue enhanced with sound and practical lighting cues.

“The Binloop is the best in the industry when you demand accuracy in playback,” McCurdy says.  “It was important that the effects be 4K because of the size of the images and the fact that there’s not enough room to do a massive projection.  Binloop allows for 2 channels of 4K.  It was essential to making the portraits look good – visitors believe they’re looking at a live person.”

The system’s frame-accurate synchronization also comes into play in the speakeasy.  “There’s a slot in the door that opens and closes and has a video monitor that reveals the eyes and voice of a bouncer asking for the password to gain entry,” McCurdy explains.  “Visitors have to interact with the bouncer before they can enter the fully-operational speakeasy.”

The A/V Binloop HD also runs the concluding 8.5-minute film that examines the unintended consequences of Prohibition from the introduction of income tax to the federal prison system.

The museum is the sixth installation that McCurdy has done with Alcorn McBride hardware.  “Binloop works like a charm; I never use anything else,” he says.  “It’s much easier to use one piece of equipment to playback multiple effects throughout the museum.

“Alcorn’s customer service is amazing – the level of service is like no other company’s,” he adds.  “When you find something like that you keep coming back.”

Visit Alcorn McBride at booth #669 during the IAAPA Attractions Expo in Orlando.

Media playback – Are you being served?

Joe Kleimanhttp://wwww.themedreality.com
Raised in San Diego on theme parks, zoos, and IMAX films, InPark's Senior Correspondent Joe Kleiman would expand his childhood loves into two decades as a projectionist and theater director within the giant screen industry. In addition to his work in commercial and museum operations, Joe has volunteered his time to animal husbandry at leading facilities in California and Texas and has played a leading management role for a number of performing arts companies. Joe previously served as News Editor and has remained a contributing author to InPark Magazine since 2011. HIs writing has also appeared in Sound & Communications, LF Examiner, Jim Hill Media, The Planetarian, Behind the Thrills, and MiceChat His blog, ThemedReality.com takes an unconventional look at the attractions industry. Follow on twitter @ThemesRenewed Joe lives in Sacramento, California with his wife, dog, and a ghost.
Share
Facebook
Twitter
Linkedin
Email
Print
WhatsApp
Pinterest
ReddIt
Tumblr
Previous articleGerstlauer and Ride Entertainment Bring Two Record Breaking Coasters to American Dream
Next articleFull List of 2017 Brass Ring Excellence in Marketing Finalists