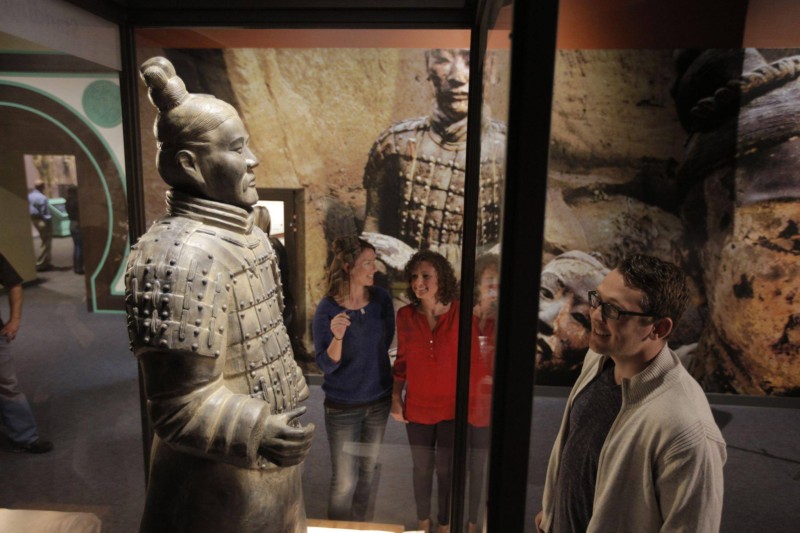 [quote]It’s important to understand that this is a place for children and families where they can learn together and share interactive experiences brought to life through sound and light shows that are made more authentic utilizing tools such as the Alcorn McBride equipment. We find  those kinds of details make our visitors feel as if they’re in the actual place depicted in the exhibit” — Kimberly Harms, Director of Media and Public Relations. [/quote]

Known as the world’s biggest and best museum for children and families, the venue’s mission is to create extraordinary learning experiences across the arts, sciences and humanities that have the power to transform the lives of children and families.  The nearly 500,000-square-foot museum boasts almost 120,000 artifacts and draws 1.25 million visitors annually.

Chief Technical Officer David Donaldson notes that, The Children’s Museum of Indianapolis’ exhibits are strategically designed to encourage family interaction and intergenerational learning vis-à-vis a number of touch points.  “High-quality sound and light shows stimulate the senses and help create a feeling in which children and families experience what it would be like to wander around another time or place via high definition video and sound recreations,” he explains.  “These immersive experiences make it seem as though you really are in China or traveling the earth 77 million years ago.”

“Leonardo: The Mummified Dinosaur” opened at the museum in March.  “We have a permanent exhibit called Dinosphere that is housed in a former CineDome, a large-format theater. It has about 150 programmable lights and artifacts,” says Donaldson.  “In part of Dinosphere is Leonardo, the largest intact dinosaur ever discovered and one of only four mummified dinosaurs in the world.  He’s about 20 feet long and 77 million years old.”  Leonardo is a juvenile Hadrosaur, or plant-eating “duckbill” dinosaur.  He was unearthed in Montana in 2001.

“Leonardo is in a special glass case with a sound and light show that tells his story,” Donaldson explains.  “He’s already one of our most popular exhibits.”

Alcorn McBride equipment plays a key role in the Dinosphere and the Leonardo exhibits.  At the heart of the Dinosphere is a V16 Pro show controller.  An A/V Binloop HD handles video playback on monitors throughout Dinosphere.  Two Lightcue DMX recorder/players are on hand, one for Dinosphere and one that manages 15 separate lights above the Leonardo exhibit.  A single-channel AM4 MP3 and WAV player runs Leonardo’s soundtrack in synch with his lighting.  When Leonardo’s seven-minute show is not running a Digital Video Machine HD 8400 plays back animated loops on a 90-inch flat panel display.

“Everything works very well,” Donaldson says.  “We have been very happy with  the Alcorn McBride gear we use as it has been very reliable and is solid state.”

Two new exhibits opened in May.  “Take Me There: China” is the second exhibition to explore modern life in a single culture.  Take Me There:® Egypt was the first. To get visitors in the mood to travel, they board an airplane fuselage where two video monitors are mounted on the front wall of the cabin and two overhead.  Five rows of seats are offered, and windows line the sides.  Three slots in an AV Binloop HD play back trip content: a video of flight attendants talking about the journey and views outside the windows.  The Binloop triggers buttkickers underneath the seats, which simulate air turbulence.

Elsewhere in “Take Me There: China” an AM4 plays ambient music and street noise in the market place, calligraphy shop, medicine shop and tea house.  In a bullet train experience, visitors sit in two rows of seats facing each other with a window in between on which a Digital Video Machine HD 8400 plays back footage shot on the super-speedy bullet train.  An additional AM4 is available in a performance space.  Staff can press wall buttons to access a series of audio clips programmed directly into the system.

Also in the China gallery is “Terra Cotta Warriors: The Emperor’s Painted Army,” the first children’s museum appearance by the famed tomb statuary since they were excavated near Xian, China in 1974.  Fifty visitors at a time are brought into the entry theater’s cue line where they watch a video run off a Digital Video Machine HD 8400.  Then they walk into the dimly lit gallery where all of the sound in the 15,000-square-foot space emanates from an AM4.  A concluding theater experience features two video walls running a loop from an Alcorn McBride Binloop.

The museum’s Playscape permanent exhibit also features an A/V Binloop HD for its cue line.  Playscape incorporates new brain research to create an authentic, physical space to help young families explore some of the most important developmental touchstones of children’s lives.  The Binloop runs video in synch for families waiting to enter the space.

“Alcorn McBride equipment has become a standard for us and a very good investment,” says Donaldson.  “It’s very reliable, all solid state.  When you have families involved, reliability is of the essence.  We have a very low threshold for things that don’t work!”

Donaldson also gives kudos to Alcorn McBride’s staff, whom he calls “very responsive.  I can always reach someone if I need something – it’s like they’re working right along with us.”

Joe Kleimanhttp://wwww.themedreality.com
Raised in San Diego on theme parks, zoos, and IMAX films, InPark's Senior Correspondent Joe Kleiman would expand his childhood loves into two decades as a projectionist and theater director within the giant screen industry. In addition to his work in commercial and museum operations, Joe has volunteered his time to animal husbandry at leading facilities in California and Texas and has played a leading management role for a number of performing arts companies. Joe previously served as News Editor and has remained a contributing author to InPark Magazine since 2011. HIs writing has also appeared in Sound & Communications, LF Examiner, Jim Hill Media, The Planetarian, Behind the Thrills, and MiceChat His blog, ThemedReality.com takes an unconventional look at the attractions industry. Follow on twitter @ThemesRenewed Joe lives in Sacramento, California with his wife, dog, and a ghost.
Share
Facebook
Twitter
Linkedin
Email
Print
WhatsApp
Pinterest
ReddIt
Tumblr
Previous articleDubai to Build World’s First Temperature Controlled City Featuring World’s Largest Indoor Theme Park
Next articleNew Comedy Animal Show “Opening Night Critters” Debuts at Busch Gardens Tampa