Alien saucer pilots are straight out of the Toy Story movies, with their pointy ears, three eyes, short antennae and facial expressions designed to convey surprise or delight. Each extraterrestrial has hitched its flying saucer to one of 22 rocket ships; together, flying saucers and rockets spin through the Pizza Planet galaxy. 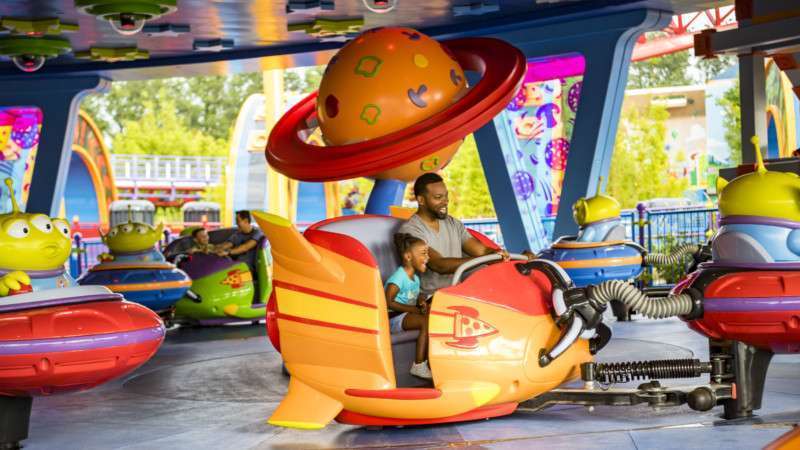 With “The Claw” dangling overhead, guests climb aboard their rocket ships and hover in Pizza Planet’s version of “deep-dish space” for an out-of-this-world saucer whirl to the beat of new versions of Toy Story songs and musical themes. During the adventure, the Aliens spin guests around toy icons like Planet Pepperonia and a pizza-inspired space station.

Before boarding Alien Swirling Saucers, guests can pose for a photo with a Buzz Lightyear action figure standing more than 14 feet tall on top of toy building blocks near the entrance to his Star Command Space Station Playset. Toy robot guards flank the Pizza Planet-inspired marquee. 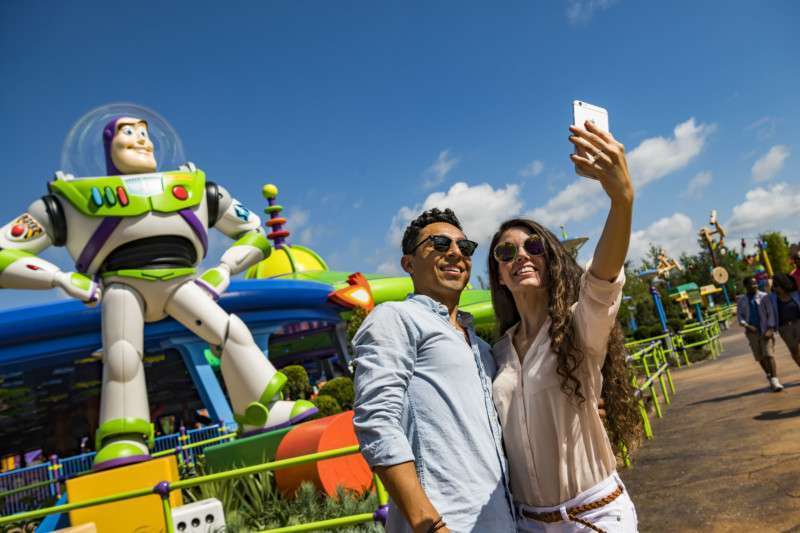 Inside Star Command, there are buttons to push, dials to turn and a switch to toggle for audio and visual effects. His creativity never flagging, Andy built a toy gantry with his Construx toy pieces that guests use to traverse from Buzz’s command center to the Swirling Saucers game.

Guests who are spin-averse can swirl vicariously by watching from the viewing area in between and around the playset.

“This is a world created by a boy’s imagination,” said Dave Fisher, Walt Disney Imagineering Senior Story Editor. “Andy has brought out all his space toys – it’s a really fun and high-energy attraction.”

Before or after a spin on Alien Swirling Saucers, guests can pose for an out-of-this-world selfie with a stationary, photo-ready green Alien in its colorful saucer just outside the attraction. Toys of all makes and sizes – from a 10-foot-diameter “rubber” ball to colorful Cooties – have been carefully placed by Andy among the landscape of overgrown grasses, toy shrubs and playset trees throughout Toy Story Land.

Joe Kleimanhttp://www.themedreality.com
Raised in San Diego on theme parks, zoos, and IMAX films, Joe Kleiman would expand his childhood loves into two decades as a projectionist and theater director within the giant screen industry. In addition to his work in commercial and museum operations, Joe has volunteered his time to animal husbandry at leading facilities in California and Texas and has played a leading management role for a number of performing arts companies. Joe has been News Editor and contributing author to InPark Magazine since 2011. HIs writing has also appeared in Sound & Communications, LF Examiner, Jim Hill Media, and MiceChat. His blog, ThemedReality.com takes an unconventional look at the attractions industry. Follow on twitter @themedreality Joe lives in Sacramento, California with his fiancé, two dogs, and a ghost.
Share
Facebook
Twitter
Linkedin
Email
Print
WhatsApp
Pinterest
ReddIt
Tumblr
Previous articleWoody’s Lunch Box puts modern spin on comfort food at Walt Disney World’s Toy Story Land
Next articleWet ‘n’ Wild Sydney joins Parques Reunidos’ international portfolio