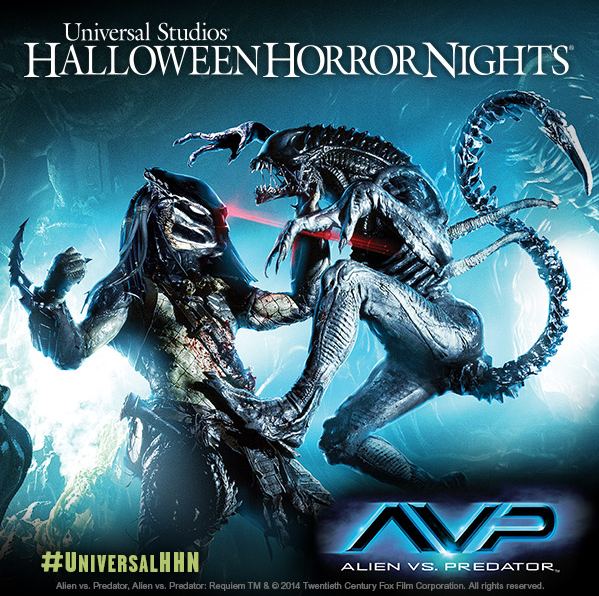 [quote]The introduction of AVP into the immensely popular ‘Halloween Horror Nights’ is further proof of the indelible mark this incredibly powerful franchise has left on fans and the horror genre itself.” — Greg Lombardo, VP Twentieth Century Fox Consumer Products[/quote]

Orlando, FL and Universal City, CA, USA /PRNewswire/ — In collaboration with Twentieth Century Fox Consumer Products, Universal Orlando Resort and Universal Studios Hollywood are putting “Halloween Horror Nights'” guests in the middle of an epic and primal war between the universe’s most deadly species in an all-new maze inspired by the cult sci-fi franchise AVP: Alien vs. Predator, beginningFriday, September 19, 2014.

AVP: Alien vs. Predator is a sci-fi horror franchise that brings together the two iconic species spawned from two blockbuster films, Alien and Predator, to create a “terrifying crossover of eponymous monsters in a raging battle against mankind struggling to survive amid the chaos that ensues from these two vengeful creatures.”  To mark the 35th anniversary celebration of Alien, and the 10th anniversary of AVP: Alien vs. Predator, “HalloweenHorror Nights” guests and fans of these celebrated films will have a chance to live the horror of these diabolical beasts as they come face to face with the terror of Aliens and Predators.

“Bringing AVP to life in a new maze is a perfect way to celebrate the 10-year anniversary of the film as well as mark the 35th anniversary of Alien, the film that started it all, and etched in our collective psyche the meaning of modern terror,” said Greg Lombardo, vice president of global live and location based entertainment at Twentieth Century Fox Consumer Products. “We’re thrilled to be working with Universal Studios to create mazes in Orlando and Hollywood that will bring fans face-to-face with the horrifying and iconic characters of AVP. The technology being leveraged will surely be a new benchmark and provide a uniquely terrifying and visceral encounter that puts guests right in the middle of an epic extraterrestrial battle for survival.”

In Universal Orlando’s maze, guests will find themselves thrust right into the middle of the primordial battle between the Aliens and Predators as they visit one of Weyland-Yutani’s secret facilities to assist with a situation that has surfaced. Communication has been lost with a bio-weapons research facility in Central America which houses many divisions dealing in extra-terrestrial technologies, specifically the Alien Xenomorph species. Pieces of transmissions were received detailing that the facility has become compromised and another alien species called Yautja – commonly known as Predators – are hunting both the Xenomorphs and any human presence found. Guests will have to navigate through the labyrinth of destruction within the facility as they struggle to survive the ancient feud between these two deadly species.

The terrifying new “AVP:  Alien vs Predator” maze at Universal Studios Hollywood will answer the proverbial question asked by mankind since the beginning of time:  Are we alone in this dark, vast universe?  “AVP:  Alien vs. Predator” will once and for all shed light on the answer when it brings to life the violent creatures cohabitating our world as it pits two rival alien species in a fight to the death with Earth as their battleground.  This menacing maze will uncover a dangerous alien spaceship carrying a race of hunter aliens known as Predators and a threatening new alien life form that uses human hosts to propagate its species.  After crash landing in a remote section of America and escaping to the countryside, the alien and predator become hunter and prey with guests caught in the crossfire.”

“When attempting to bring two of the most iconic creatures ever put on film to ‘Halloween Horror Nights,’ you need to rely on everything you’ve learned up to this point” said Michael Aiello, Director of Entertainment – Creative Development, Universal Orlando Resort.  “We’re employing our full arsenal of tricks and techniques in translating the AVP: Alien vs. Predator brand into an authentic and horrific maze experience. Puppetry, elaborate costumes and unique environments have all been created in close collaboration with Twentieth Century Fox. Our guests are going to be thrown head first into this epic battle where only the strong will survive. This is truly going to be an out-of-this-world maze experience that the fans have been waiting for.”

“‘AVP:  Alien vs. Predator’ is by far the most technically complicated and ambitious maze we’ve ever created for ‘Halloween Horror Nights,'” said John Murdy, Creative Director for Universal Studios Hollywood and Executive Producer of “Halloween Horror Nights.”  “It’s a monumental undertaking to recreate these massive, iconic characters for a live event.  Fortunately, we have the expert assistance of Academy Award-winning make-up artists, Tom Woodruff and Alec Gillis from Amalgamated Dynamic Inc. (ADI), the special effects geniuses behind the original creatures for the AVP film franchise.  Tom and Alec and the ADI team are excited about our maze and have graciously allowed us to cast from their original molds so that our maze will be absolutely authentic to the movies.”

Universal Studios’ “Halloween Horror Nights” events have a more than 20-year history of creating incredibly entertaining, horrifying Halloween experiences that are consistently rated the nation’s best. The events on each coast feature highly-themed, disturbingly real, haunted mazes based on everything from films to nightmares – and streets filled with hundreds of specially trained “scareactors.” Other announced “Halloween Horror Nights” experiences include, “The Walking Dead:  The End of the Line,” “From Dusk Till Dawn,” “Face Off: In the Flesh” and “The Purge: Anarchy.”

Joe Kleimanhttp://wwww.themedreality.com
Raised in San Diego on theme parks, zoos, and IMAX films, Joe Kleiman would expand his childhood loves into two decades as a projectionist and theater director within the giant screen industry. In addition to his work in commercial and museum operations, Joe has volunteered his time to animal husbandry at leading facilities in California and Texas and has played a leading management role for a number of performing arts companies. Joe has been News Editor and contributing author to InPark Magazine since 2011. HIs writing has also appeared in Sound & Communications, LF Examiner, Jim Hill Media, and MiceChat. His blog, ThemedReality.com takes an unconventional look at the attractions industry. Follow on twitter @ThemesRenewed Joe lives in Sacramento, California with his fiancé, two dogs, and a ghost.
Share
Facebook
Twitter
Linkedin
Email
Print
WhatsApp
Pinterest
ReddIt
Tumblr
Previous articleTAA Names Christian Angenvoort as General Manager of TAA Middle East and VP Business Design for Asia and India
Next articlePortable IMAX Theater to Be Centerpiece of Baseball Hall of Fame 75th Anniversary Tour