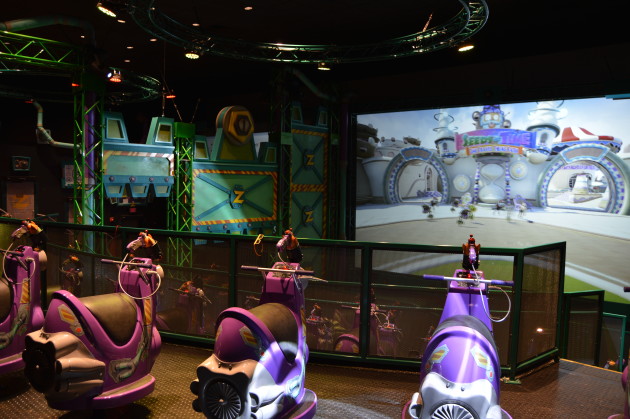 Plants vs. Zombies™ Garden Warfare: 3Z Arena, the world’s first ‘intra-active’ 3-D game experience, is now open at Carowinds in 2016. This state of the art attraction based on the wackiest video game ever made opened in tune with the newest release from the franchise:Plants vs. Zombies Garden Warfare 2. Synergy efforts have been at the heart of the design and development phases of the project to give Carowind guests the ability to play with the newest characters from the video game including Super Brainz, a zombie super hero who thinks he’s an 80’s action movie star, and Citron, a bounty-hunting orange from the future.

An intra-active experience means the game allows players to interact with the opposing team’s screen: Team Plants battle against Team Zombies all together in a side-by-side dueling theater in order to raise the excitement even more and make the audience go wild. The Plants vs. Zombies Garden Warfare: 3Z Arena complex is decked with 3-D technology, massive screens, surround sound and motion-based seats. Teams compete in the Plants vs. Zombies universe during an almost five minute backyard battle, where they shoot screens with blasters and track their scores as they go.

After successful collaborations with many intellectual property (IP) owners including LEGO, Marvel Entertainment and Warner Bros./DC Comics, this partnership as turnkey service provider with EA Games/PopCap confirms the position of Alterface Projects as a trusted partner of choice for interactive attractions based on famous IP’s.

Joe Kleimanhttp://wwww.themedreality.com
Raised in San Diego on theme parks, zoos, and IMAX films, InPark's Senior Correspondent Joe Kleiman would expand his childhood loves into two decades as a projectionist and theater director within the giant screen industry. In addition to his work in commercial and museum operations, Joe has volunteered his time to animal husbandry at leading facilities in California and Texas and has played a leading management role for a number of performing arts companies. Joe previously served as News Editor and has remained a contributing author to InPark Magazine since 2011. HIs writing has also appeared in Sound & Communications, LF Examiner, Jim Hill Media, The Planetarian, Behind the Thrills, and MiceChat His blog, ThemedReality.com takes an unconventional look at the attractions industry. Follow on twitter @ThemesRenewed Joe lives in Sacramento, California with his wife, dog, and a ghost.
Share
Facebook
Twitter
Linkedin
Email
Print
WhatsApp
Pinterest
ReddIt
Tumblr
Previous articleRemembering Peter Chernack, 1948-2016
Next articleJamie Elswick Returns to Gateway Ticketing as Business Solutions Architect