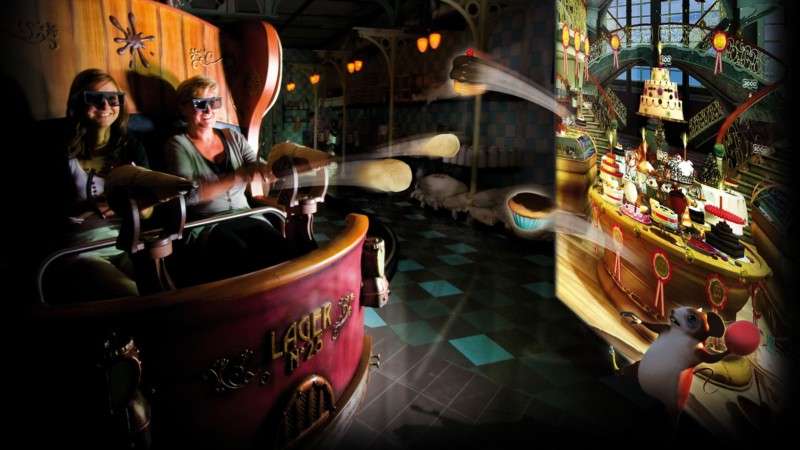 Alterface received the European Star Award 2017 for one of Europe’s best dark rides, The Maus au Chocolat attraction at Phantasialand, which  comes out second after Pirates of the Carribean.

For the sixth time, Europe’s biggest prize in the attractions industry was awarded to the best theme parks on the continent. The European Star Award was launched by the trade magazine Kirmes & Park Revue in 2012, in order to bring attention to innovative ideas and entrepreneurial courage within the industry.

Agi Reddersen, Representative of Gemi Verlag GmbH, explains: “An independent trade jury of international industry experts vote their rankings for the “Top Ten” attractions in 13 different categories. The independent European Star Award has a clear and straightforward voting system whereby the winning theme park or attraction is chosen by the majority of points received. Each of the five best placed are presented with exclusive, handcrafted sculptures. We congratulate all winners and look forward to the European Star Award 2018 in Amsterdam.”

Chasing hungry mice in Berlin bakery The ride takes place at Berlin’s most famous bakery, invaded by thousands of hungry mice. Armed with the chef’s piping bag, visitors have to make them leave the bakery by shooting fast to score as many points as possible.

Phantasialand is known for leaving nothing to chance, each ride in the park is a masterpiece of design and storytelling with an eye for detail. Following a close collaboration with the park designer and project management, Alterface presented this state-of-the-art attraction featuring 3D animation and special effects. In order to get the “ballistic” shooting capability, they implemented Alterface 4D Shooter technology. The themed vehicles were designed and produced by ETF Ride Systems.

Combined with a total of 42 3D screens and a stunning theming, this ride has quickly become one of the park’s favorites. Its flawless operations and appeal to a wider public has made it become Europe’s best family attraction, year after year.

Ben Cornet, CEO and Founder at Alterface, concludes: “We are very pleased to receive this award with a 6-year old interactive dark ride. It proves the timeliness of the attraction and long lifespan. At the time of installation, it was a very innovative concept ahead of anything else, and even today visitors remain excited by the gameplay and wonderful story. It’s been on the top-3 attractions of the park ever since the opening.”

Joe Kleimanhttp://wwww.themedreality.com
Raised in San Diego on theme parks, zoos, and IMAX films, InPark's Senior Correspondent Joe Kleiman would expand his childhood loves into two decades as a projectionist and theater director within the giant screen industry. In addition to his work in commercial and museum operations, Joe has volunteered his time to animal husbandry at leading facilities in California and Texas and has played a leading management role for a number of performing arts companies. Joe previously served as News Editor and has remained a contributing author to InPark Magazine since 2011. HIs writing has also appeared in Sound & Communications, LF Examiner, Jim Hill Media, The Planetarian, Behind the Thrills, and MiceChat His blog, ThemedReality.com takes an unconventional look at the attractions industry. Follow on twitter @ThemesRenewed Joe lives in Sacramento, California with his wife, dog, and a ghost.
Share
Facebook
Twitter
Linkedin
Email
Print
WhatsApp
Pinterest
ReddIt
Tumblr
Previous article
Hong Kong Disneyland Begins Construction on Six Year Expansion
Next article
L-Acoustics Extends Relationship with Puy du Fou