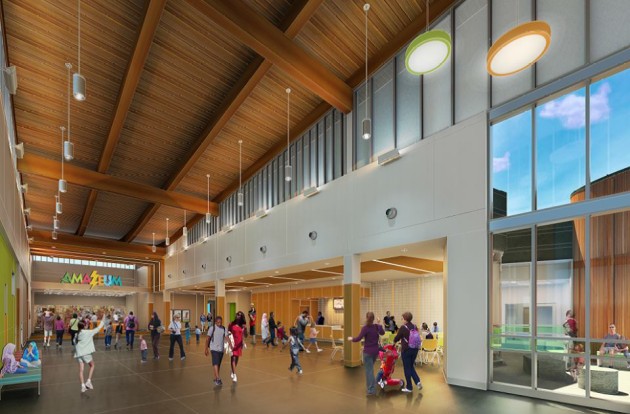 Bentonville, AR, USA (March 17, 2015) — The Amazeum made several major announcements Tuesday, including a new name, an official opening date and initial details of a new exhibit.

The Amazeum will now be called the Scott Family Amazeum in honor of the Scott family’s support of the campaign. The building will open to the public July 15, 2015.

Lee and Linda Scott, who have spent more than 30 years in Northwest Arkansas, were among early advocates of what was initially known as “The Children’s Museum of Northwest Arkansas.” They promoted the many benefits a hands-on, interactive family museum would bring to families throughout the region.

”The support we have received from Lee and Linda Scott, and their family, has been tremendous. They have been generous not only with their financial support, but also with their time and talent. Their son, Eric Scott, serves on our board. His wife, Elda Scott, actively and ardently supports our efforts with volunteer service and connecting us in the community. Our board finds it most fitting to honor their gifts in this way. Theirs is a key donation that keeps the momentum moving toward our $28.5 million comprehensive campaign goal,” said Molly Rawn, director of development and communications.

The decision to name the building after the Scotts came out of gratitude for their very generous gifts and support of the Amazeum.

“We are honored to have an institution we care so deeply about be named for our family. We are so happy that we have been given the opportunity to give back to the Northwest Arkansas community and we hope that our support of the Amazeum will inspire others to give,” said Scott, a 35-year veteran of Walmart who retired as CEO in 2009. “We believe the exposure the Amazeum provides to science, technology, engineering, art and creativity will give children skills to draw on their entire lives. The Amazeum will add richness to the lives of children and their families in Northwest Arkansas.”

Executive Director Sam Dean thanked the Scott family for helping to ensure that the Amazeum serves the community and region for generations. “We’re very grateful for their foresight and for their generous support of the Amazeum,” he said. “Families like theirs are what make Bentonville and all of Northwest Arkansas a great place to live, work and play.” 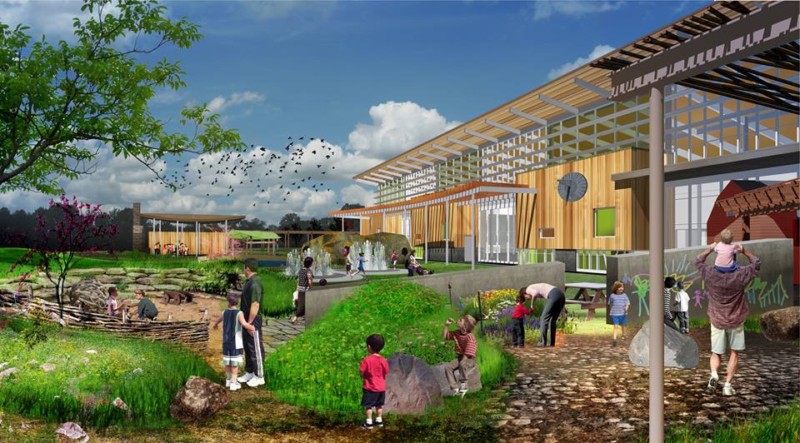 The announcements were made Tuesday at the Walmart Museum in Bentonville to thank the company for its contributions to the Scott Family Amazeum and provide details to associates about the permanent exhibit that will recognize Walmart as a signature sponsor.

“For some time, Walmart has been a signature sponsor,” Dean said. “They have stayed with us as the project has evolved, never wavering in their dedication to making our community outstanding. And that support will be recognized with an exhibit in the Amazeum. The natural fit is The Market, sponsored by Walmart.”

In this interactive space, guests will be able to not only “shop” for produce and groceries, but also don aprons and work behind the butcher counter or in the bakery. Additionally, they will be able to serve other guests in the café or play the role of cashier.

Also featured in this space is the work of artist Matthew Moore who was featured in Crystal Bridges’ landmark exhibit, State of the Art. Moore also is a farmer, and his work focuses on nature and the land. His time-lapse photography of crops growing will be installed among the produce in the market. Guests will be able to use a dial to speed up, slow down or reverse the growth process.

Among the goals of the exhibit is to connect young explorers to the source of their food.

Joe Kleimanhttp://wwww.themedreality.com
Raised in San Diego on theme parks, zoos, and IMAX films, InPark's Senior Correspondent Joe Kleiman would expand his childhood loves into two decades as a projectionist and theater director within the giant screen industry. In addition to his work in commercial and museum operations, Joe has volunteered his time to animal husbandry at leading facilities in California and Texas and has played a leading management role for a number of performing arts companies. Joe previously served as News Editor and has remained a contributing author to InPark Magazine since 2011. HIs writing has also appeared in Sound & Communications, LF Examiner, Jim Hill Media, The Planetarian, Behind the Thrills, and MiceChat His blog, ThemedReality.com takes an unconventional look at the attractions industry. Follow on twitter @ThemesRenewed Joe lives in Sacramento, California with his wife, dog, and a ghost.
Share
Facebook
Twitter
Linkedin
Email
Print
WhatsApp
Pinterest
ReddIt
Tumblr
Previous articleNew 100,000 Square Foot Wing of Corning Museum Dedicated to Contemporary Glass Art Opens March 20
Next articleEXPO 2015 to Feature First of its Kind Pavilion Dedicated to Wine