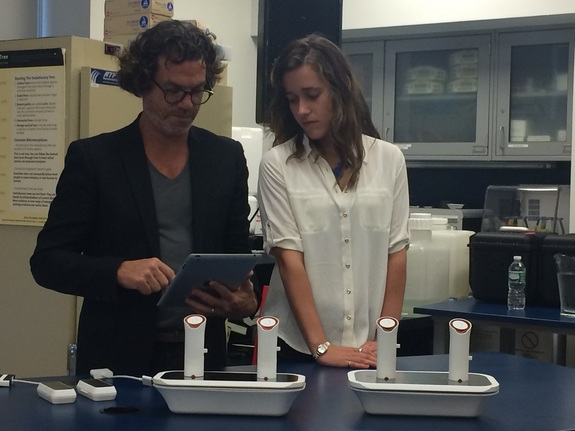 New York, NY, USA (June 17, 2014) — The first international scent messages were exchanged today between the American Museum of Natural History and the Le Laboratoire Paris in France using a new iPhone application called oSnap. The new technology, invented by Harvard professor David Edwards, allows users to tag photographs with more than 300,000 unique scents and send and receive an oNote via email, Facebook, and Twitter in select hotspots that have an oPhone, the hardware that disperses the scent. The Museum will host the first oPhone hotspot in the United States during three weekends in July along with hands-on activities exploring the evolution of the sense of smell in humans.

“oPhone introduces a new kind of sensory experience into mobile messaging—a form of communication that until now has remained consigned to our immediate local experience of the world,” Edwards said. “With the oPhone, people will be able to share with anyone, anywhere, not just words, images, and sounds, but sensory experience itself.”

Within the next few months, in select hotspots around the world, oPhones will be available in freely accessible public settings. The first hotspots will be located in Paris,Cambridge, Massachusetts, and in New York City at the Museum, with more to come.

“The sense of smell is driven by a powerful and intricate biological system that has evolved over millions of years. And in humans the olfactory bulb is part of the brain’s limbic system, an area closely associated with memory and feeling, and thus aroma and scent can be especially powerful for us. Scientists around the world continue to explore the complex ways in which the brain interacts with and ultimately regulates the senses,” said Michael Novacek, the Museum’s Senior Vice President and Provost for Science. “The Museum is always excited to investigate new technologies, and explore their potential as tools for enhancing the visitor experience.”

Humans are able to discriminate between millions of different olfactory stimuli,though our sense of smell is less acute than that of other closely related species. Throughout the last 55 million years of primate evolution, primates have ceded olfactory sensing for better vision—a trade-off initiated by a behavioral shift from a nocturnal to a diurnal lifestyle. Many olfactory receptor genes in humans are pseudogenes, which do not functionally express proteins as they do in other primates. The Museum most recently examined how humans process the sense of smell as part of its 2010 special exhibition Brain:The Inside Story.

For three consecutive weekends starting on July 12, the Museum will feature an oPhone in its Sackler Educational Laboratory for Comparative Genomics and Human Origins, where visitors can try the technology and learn about how smell is processed in humans compared to our primate and hominid relatives.

Joe Kleimanhttp://wwww.themedreality.com
Raised in San Diego on theme parks, zoos, and IMAX films, InPark's Senior Correspondent Joe Kleiman would expand his childhood loves into two decades as a projectionist and theater director within the giant screen industry. In addition to his work in commercial and museum operations, Joe has volunteered his time to animal husbandry at leading facilities in California and Texas and has played a leading management role for a number of performing arts companies. Joe previously served as News Editor and has remained a contributing author to InPark Magazine since 2011. HIs writing has also appeared in Sound & Communications, LF Examiner, Jim Hill Media, The Planetarian, Behind the Thrills, and MiceChat His blog, ThemedReality.com takes an unconventional look at the attractions industry. Follow on twitter @ThemesRenewed Joe lives in Sacramento, California with his wife, dog, and a ghost.
Share
Facebook
Twitter
Linkedin
Email
Print
WhatsApp
Pinterest
ReddIt
Tumblr
Previous articleWorld’s Largest Eco-Themepark Planned for Singapore
Next articleRing Around the Dome