American Museum of Natural History Explores “The Power of Poison” 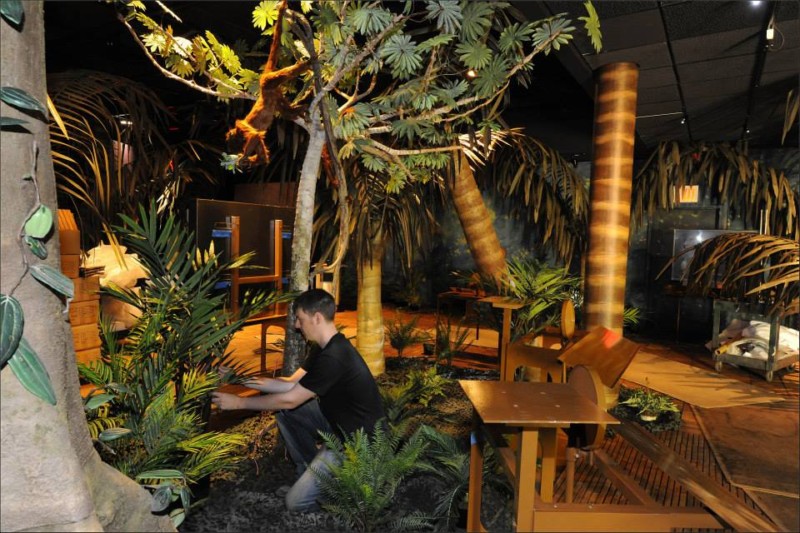 New York, NY, USA — For as long as people have created myths, they’ve told stories about the mysterious powers of poison. But in the natural world, poisons are simply part of the daily struggle to survive. The astonishing variety of evolutionary adaptations among toxic plants and animals is at the heart of the new exhibition The Power of Poison, which also examines humans’ attempts to understand poisons’ potency, how the science of detecting poison developed, and how researchers today use venoms and other natural toxins to develop new medical treatments. Visitors encounter some of history’s most puzzling poisoning cases, use clues to solve poisoning mysteries, and take part in a live theater presentation to help unravel a real-world case of poisoning.

“Every day, the Museum explores all that is extraordinary and fascinating in the natural world, and the relationship of these myriad phenomenon to humanity,” said Ellen V. Futter, President of the American Museum of Natural History. “Nowhere is this more dramatic, perhaps, than in the story of poison. What evolved in animals and plants as a defense against predators or a means of preying has been used by humans throughout history for magic, murder, villainy, intoxication, and, increasingly, groundbreaking medicine. This exhibition reveals the strange and even intriguing things that happen when humans and toxic substances collide.”

As scientists probe the secrets of poison, they’re finding that these substances—endlessly shaped by natural selection—can also be powerful forces for healing.

“Millions of years of evolutionary history have produced a rich diversity of poisons across all groups of plants and animals, an arsenal of biochemical weapons that organisms use for offense and defense. In many cases humans have learned to harness those potent tools as well,” said Mark Siddall, curator in the Division of Invertebrate Zoology who oversaw The Power of Poison. “In this exhibition, we illuminate how poison is used in the natural world—and the evolutionary history behind it—as well as the ways in which people have used it and tried to understand its power throughout the centuries.”

While plants produce toxins primarily to protect against being eaten, animals make poison mostly to deter predators and capture prey. But there is an extraordinary variety of evolutionary strategies among organisms who use poison in their struggle to survive, as visitors discover while walking through a remote Colombian forest re-created in the exhibition’s Poison in Nature section. Home to many dangerous inhabitants, Colombia’s Chocó forest is the perfect place to look for adaptations that range from mimicry of deadlier species’ coloring to lethal partnerships forged between poisonous insects and the plants that provide them with food and shelter—and to encounter several live species, including golden poison frogs and poisonous caterpillars, which are on view.

A famous scene in William Shakespeare’s Macbeth, which features a trio of witches dropping gruesome ingredients into a boiling cauldron, is just one of several tales and legends re-created in life-size dioramas in the exhibition’s Poison in Myth and Legend section.  Shakespeare’s witches, who are summoning spirits to reveal the future, are drawing on the magical powers of a few highly poisonous plants: toxic wolfsbane, hemlock, and yew, among others. Other scenes from familiar stories include the Mad Hatter’s tea party from Lewis Carroll’s Alice’s Adventures in Wonderland. The Mad Hatter’s odd behavior, as the exhibition explains, was likely inspired by real-life symptoms of mercury poisoning suffered by workers exposed to the substance in the hat-making industry in the 18thand 19th centuries.

Just as the source of disease was mysterious for most of human history, so was cause of death—especially if poison, which in many cases was difficult to detect, was involved. A gallery in the exhibition’s Villains and Victims section considers some of history’s most notorious poisoners and poisonings that still puzzle us today, offering a glimpse of the challenges of detecting poison, especially before toxicology was developed as a scientific discipline in the late 1800s. Still, there are new details to glean about Cleopatra’s death or Napoleon’s decline on Saint Helena from our modern understanding of poisons, even if some cases remain mysteries.

In the late 19th century, scientists began to catch up to resourceful poisoners and to apply new knowledge to helping solve criminal cases. Visitors hear about a real-world case from the 1830s, and the scientific methods newly available to criminal investigators, from a live presenter in the exhibition’s Detecting Poisons theater.

Poisoning is not always the result of a criminal action, of course. An iPad game  lets visitors play detective by finding clues about various toxins and poisonous creatures and reviewing victims’ symptoms to help solve three puzzling cases of accidental poisonings. These include the mysterious illness of Captain James Cook and two naturalists aboard Cook’s ship, Resolution, in 1774. Was it the lead paint used to repaint the ship, something they ate, or arsenic in a taxidermy kit that caused such odd symptoms among the three men? Visitors are able to bring the fun home by downloading the game “The Power of Poison: Be a Detective,” as a free app for iPad from the Apple App Store.

The field of toxicology was born out of a specific and urgent need—to detect poisons and prevent illness or death. Over the past century, advances in cell biology have allowed scientists to discover different ways in which poisons affect human cells and to figure out how to put that power to work restoring our health. As the Poison for Good section of the exhibition points out, hundreds of species of plant and animal toxins are being studied as sources for potential ingredients for life-saving new drugs. Many are surprising. Vampire bats’ saliva, it turns out, contains an anticlotting agent called draculin, which could protect stroke patients from blood clots in the brain. Toxins from cone snails may prove useful for treating epilepsy, Alzheimer’s, and Parkinson’s disease. And a component of gila-monster venom, which was found to stimulate insulin production and lower blood sugar levels, is now being used in a treatment for diabetes. Visitors are able to see several live animals—including a gila monster, rosehair tarantula, and several marine animals—whose toxins have been studied for medical applications in this part of the exhibition.

The Power of Poison is curated by Mark Siddall, curator in the Division of Invertebrate Zoology, whose research focuses on the evolution of leeches and their blood-feeding behavior. Dr. Siddall is also the curator of the Museum’s Picturing Science exhibition, currently on view in the Akeley Gallery.

The exhibition is designed and produced by the American Museum of Natural History’s award-winning Exhibition Department under the direction of David Harvey, Senior Vice President for Exhibition.

Major funding has been provided by the Lila Wallace—Reader’s Digest Endowment Fund.

Joe Kleimanhttp://wwww.themedreality.com
Raised in San Diego on theme parks, zoos, and IMAX films, InPark's Senior Correspondent Joe Kleiman would expand his childhood loves into two decades as a projectionist and theater director within the giant screen industry. In addition to his work in commercial and museum operations, Joe has volunteered his time to animal husbandry at leading facilities in California and Texas and has played a leading management role for a number of performing arts companies. Joe previously served as News Editor and has remained a contributing author to InPark Magazine since 2011. HIs writing has also appeared in Sound & Communications, LF Examiner, Jim Hill Media, The Planetarian, Behind the Thrills, and MiceChat His blog, ThemedReality.com takes an unconventional look at the attractions industry. Follow on twitter @ThemesRenewed Joe lives in Sacramento, California with his wife, dog, and a ghost.
Share
Facebook
Twitter
Linkedin
Email
Print
WhatsApp
Pinterest
ReddIt
Tumblr
Previous articleSuper 78 Principals Kick Off Planned Restoration of Walt Disney Birthplace
Next articlePortAventura Partners with Cirque du Soleil to Present “KOOZA” Summer 2014