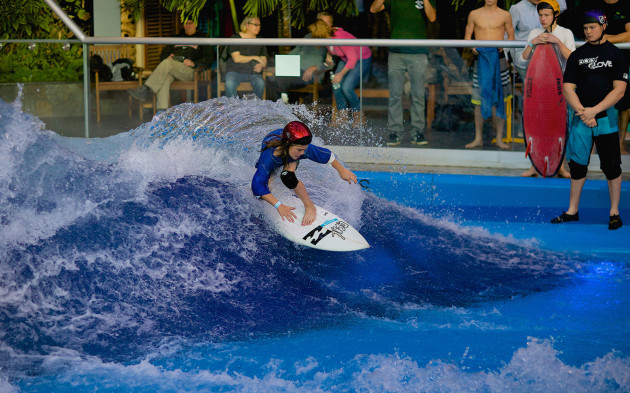 ABOVE: For the second consecutive year, Robbie Goodwin surfs to a victory in the Boys division of the Northern New England Eastern Surf Association Indoor Champion.

Solana Beach, CA – New England may be an uncommon site for a surfing competition in the month of November before Thanksgiving, but competitive surfers were able to give thanks for American Wave Machines’ SurfStream®  technology as they competed in the Northern New England Eastern Surf Association Indoor Surfing Championship.

More than 30 surfers, age 9-18 participated in the Eastern Surfing Association (ESA) competition on November 14th at Surf’s Up in Nashua, NH. For the second consecutive year, Robbie Goodwin was the winner in the Boys division (age 11 and under) and Hunter Sims took home the title in the Junior Men’s division. New Hampshire Resident Kainalu “Kai” Nichols, returned after his big win last year, adding another victory to his resume in the Open competition. Nichols was also the runner up in the Junior Men’s category.

“We were thrilled to come back to Surf’s Up New Hampshire with our talented group of young surfers for an amazing championship event,” said Lenny Nichols, Northern New England District Director, Eastern Surfing Association. “Having the ability to surf indoors in November in the Northeast is a huge game changer for the growth of our sport, and technology from American Wave Machines makes it possible.”

“The ESA indoor surfing championship was epic, with everyone ripping throughout the event. It was really cool to see the difference between the kids who learned in the ocean and the kids who learned on American Wave Machines’ SurfStream,” said Pro Surfer Cheyne Magnusson. “With each surfer getting the exact same wave to work with, the technology really allows you to judge on pure talent and style.”

American Wave Machines’ SurfStream technology generates natural feeling standing waves. The SurfStream at Surf’s Up is the world’s largest standing wave machine with a 32-foot channel that can produce two- to six-foot waves, including barreling waves that challenge even experienced surfers.

“We are thrilled to have another Eastern Surfing Association championship event use American Wave Machines’ technology,” said Bruce McFarland, founder and president, American Wave Machines. “The spectator quality of this amateur contest was the best I have ever witnessed.  It was 12 hours of heats and you could see the fatigue, frustration, endurance and adrenaline in the competitors from as close as 10’ away.  In the final, the personal drive to elevate for one more heat was as evident as their inherent skill and style. SurfStream is expanding the growth of the sport and enabling competition-quality surfing.”

American Wave Machines also has patented technology that creates an infinite variety of waves that replicate point break, beach break, and reef break without long waits. Called PerfectSwell®, it is the first and only air-pressure system to create naturally occurring ocean swells for an authentic world class surfing experience, and is currently operational and expanding into new locations around the world.

“With wave pools eliminating the barriers to surfing’s continued growth, including proximity to the ocean and length of time between rides, the potential for world-class surfing competitions, including the Olympics, is within reach,” McFarland concluded.

Joe Kleimanhttp://wwww.themedreality.com
Raised in San Diego on theme parks, zoos, and IMAX films, Joe Kleiman would expand his childhood loves into two decades as a projectionist and theater director within the giant screen industry. In addition to his work in commercial and museum operations, Joe has volunteered his time to animal husbandry at leading facilities in California and Texas and has played a leading management role for a number of performing arts companies. Joe has been News Editor and contributing author to InPark Magazine since 2011. HIs writing has also appeared in Sound & Communications, LF Examiner, Jim Hill Media, and MiceChat. His blog, ThemedReality.com takes an unconventional look at the attractions industry. Follow on twitter @ThemesRenewed Joe lives in Sacramento, California with his fiancé, two dogs, and a ghost.
Share
Facebook
Twitter
Linkedin
Email
Print
WhatsApp
Pinterest
ReddIt
Tumblr
Previous articleBob Rogers shares favorite quotes from “Legends” panel at IAAPA
Next articleKatz Family Members Take on New Roles at Cinnabar