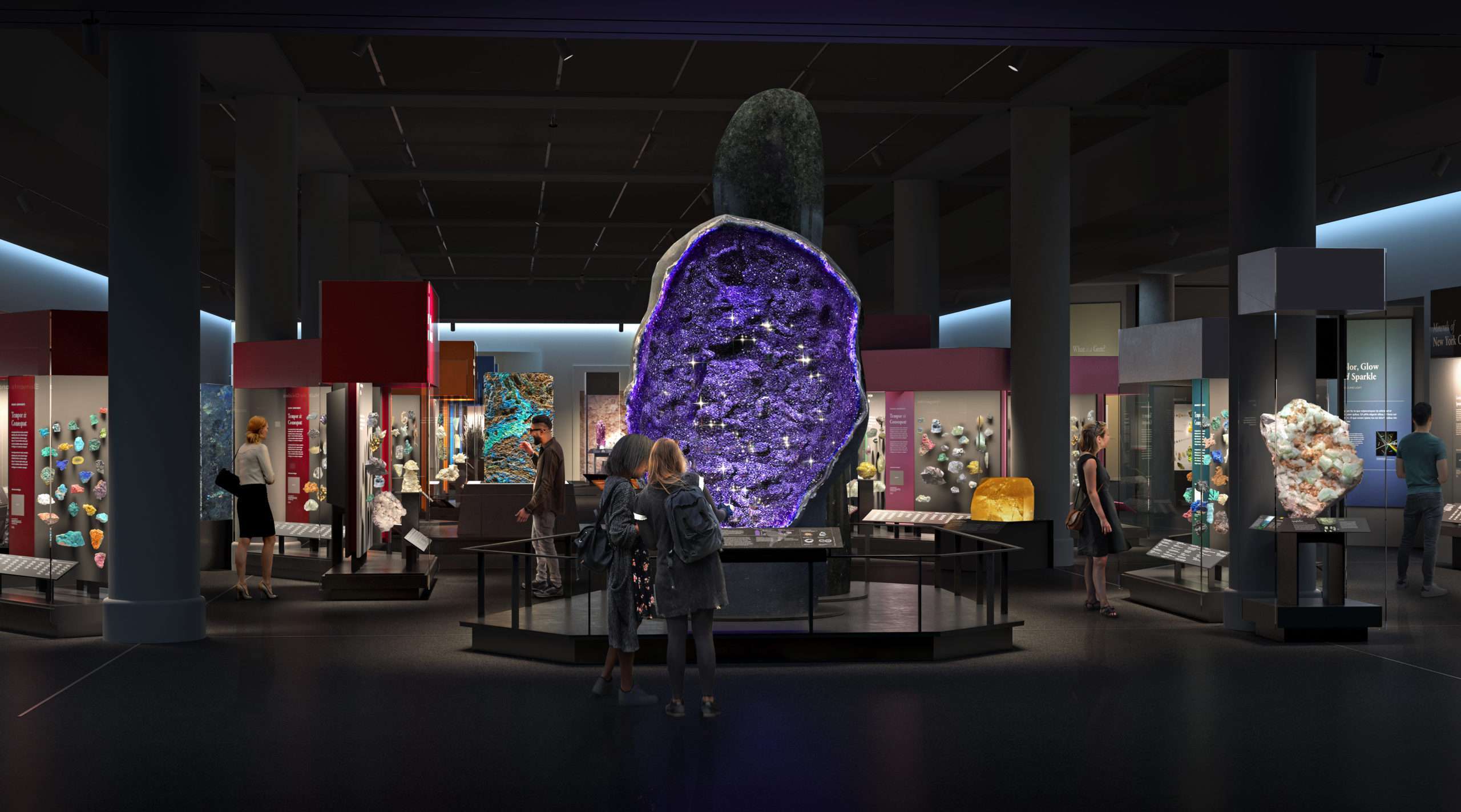 The American Museum of Natural History has announced that it will open the completely redesigned Allison and Roberto Mignone Halls of Gems and Minerals in fall 2020. A brilliant showcase for one of the greatest collections of its kind and an engaging guide to recent science about our dynamic planet, the 11,000-square-foot halls will feature:

**recently acquired specimens, including two remarkable amethyst geodes that are among the world’s largest on public display

**and the halls’ first temporary exhibition gallery, opening with Beautiful Creatures, a celebration of exquisite historic and contemporary jewelry inspired by animals.

With interactive displays, touchable specimens, and media, the halls’ redesigned exhibits will tell the fascinating story of how the vast diversity of mineral types—which, similarly to biological organisms, are grouped into species—arose on Earth, how scientists classify them, and how humans have used them throughout the millennia for personal adornment, tools, and technology.

Highlights will include a luminous gallery featuring a wall-sized panel of rock glowing fluorescently in shades of orange and green; a pair of exquisite amethyst geodes from Uruguay that tower to a height of 12 feet and 9 feet; and the 9-pound almandine “subway” garnet discovered under Manhattan’s 35th Street in 1885. Jewelry in animal forms featured in the temporary exhibition gallery will include pieces by Cartier, Bulgari, and Tiffany & Co., as well as by contemporary designers such as Bina Goenka. The halls are curated by George E. Harlow, curator in the Museum’s Division of Physical Sciences. Marion Fasel is guest curator for the Beautiful Creatures temporary exhibition.

The halls are undergoing renovation as part of the physical and programmatic initiatives undertaken in conjunction with the 150th anniversary celebration of the Museum, which was founded in 1869. These projects will culminate in the opening of the Richard Gilder Center for Science, Education, and Innovation, a major new facility that will house exhibition galleries, education spaces, and collections.

“The opening of the Mignone Halls of Gems and Minerals will be a milestone in a wide range of capital and programmatic enhancements commemorating the Museum’s 150th anniversary,” said Ellen V. Futter, President of the American Museum of Natural History. “By telling the fascinating stories of the complex processes that gave rise to the extraordinary diversity of minerals on our dynamic planet and describing how people have used them throughout history for personal adornment, tools, and technology, the Halls will not just be glittering but also intellectually engaging. The new Mignone galleries will also be a major gateway, directly linking visitors to the new Richard Gilder Center for Science, Education, and Innovation. We are indebted to Allison and Roberto Mignone for making this important project possible.”

“When I first started as a curator at the Museum over 40 years ago, the most recent version of these galleries had just opened. Science has progressed significantly in that time, such as with the concept of mineral evolution,” said George E. Harlow, curator of the new halls. “These new exhibits will present our current scientific understanding of gems and minerals, present the environments in which they form, and focus on the intimate relationship between minerals and life.”

“Halls like these are crucial and tangible teaching tools that communicate an understanding of humanity’s place in the universe,” said Allison Mignone. “Our family’s experiences at the Museum have helped us see the discoveries and sparks that take place when spectacular exhibits such as this one are on view, and remarkable stories, such as those that will be featured in these renovated galleries, are told.”

Exhibits in the Mignone Halls of Gems and Minerals will explore the conditions on our planet that have made possible the extraordinary variety of mineral species found on Earth. In addition to the role of plate tectonics and fluids responsible for the formation of crystals, exhibits will reveal how the introduction of free oxygen into the Earth’s atmosphere more than 2 billion years ago triggered an explosion not only in biological life but also in mineral diversity. The oxygenated atmosphere—produced by cyanobacteria, a group of photosynthetic organisms—made it possible for oxygen to combine into many more vividly colorful minerals on Earth, now numbering approximately 5,500 species.

The Mignone Halls of Gems and Minerals will be a striking complement to the David S. and Ruth L. Gottesman Hall of Planet Earth and Hayden Planetarium in the Rose Center for Earth and Space, and the Arthur Ross Hall of Meteorites. The Gottesman Hall of Planet Earth illustrates the evolution and inner workings of our dynamic planet with outstanding geological specimens and interactive exhibits on climate change, while the Hayden Planetarium educates visitors about the latest space science through immersive presentations such as the Museum’s newest Space Show Worlds Beyond Earth.The Ross Hall of Meteorites—which is immediately adjacent to the Mignone galleries—explores the origins of our solar system through holdings from the Museum’s world-class collection of meteorites, which contain some of the same minerals found on Earth.

With exhibits that support New York State and national science education standards, these halls serve as a vital resource for school and camp groups, educators, and graduate students in the Museum’s Master of Arts in Teaching program, which provides a specialization in Earth science for teachers of grades 7 through 12.

The Mignone Halls of Gems and Minerals is designed by Ralph Appelbaum Associates together with the American Museum of Natural History’s award-winning Exhibition Department under the direction of Lauri Halderman, vice president for exhibition.

Generous support has been provided by the Arthur Ross Foundation.

Worlds Beyond Earth is dedicated to the memory of Charles Hayden in celebration of the 150thanniversary of his birth and made possible by the generous support of the Charles Hayden Foundation.

Proudly sponsored by Bank of America.

Joe Kleimanhttp://wwww.themedreality.com
Raised in San Diego on theme parks, zoos, and IMAX films, InPark's Senior Correspondent Joe Kleiman would expand his childhood loves into two decades as a projectionist and theater director within the giant screen industry. In addition to his work in commercial and museum operations, Joe has volunteered his time to animal husbandry at leading facilities in California and Texas and has played a leading management role for a number of performing arts companies. Joe previously served as News Editor and has remained a contributing author to InPark Magazine since 2011. HIs writing has also appeared in Sound & Communications, LF Examiner, Jim Hill Media, The Planetarian, Behind the Thrills, and MiceChat His blog, ThemedReality.com takes an unconventional look at the attractions industry. Follow on twitter @ThemesRenewed Joe lives in Sacramento, California with his wife, dog, and a ghost.
Share
Facebook
Twitter
Linkedin
Email
Print
WhatsApp
Pinterest
ReddIt
Tumblr
Previous articleIce Breaker track complete and first train in place at SeaWorld Orlando
Next articleElectrosonic provides engineering and AV build services for Niagara Falls Underground Railroad Heritage Center

Audubon Nature Institute to renovate Aquarium of the Americas