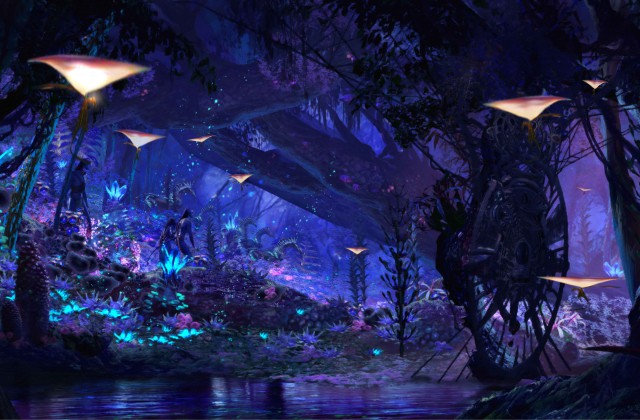 Bob Chapek, Chairman, Disney Parks and Resorts, gave a look into the future of the newest addition to the Walt Disney World Resort during a D23 event, unveiling some exciting new updates coming soon to Disney’s Animal Kingdom expansion – Pandora – The World of Avatar.

As part of Chapek’s conversation with D23 host Jeffrey Epstein, he revealed the new entry bridge to Pandora – The World of Avatar. According to the storyline developed by Walt Disney Imagineering and Lightstorm Entertainment, this bridge was built during a time when a destructive company called the RDA – Resources Development Administration came to Pandora. Now that they are long gone, nature is breaking down evidence of their presence. This bridge will soon serve as an entry into the base camp of Alpha Centauri Expeditions, the eco-tour group that will host explorers on their Pandora adventure. 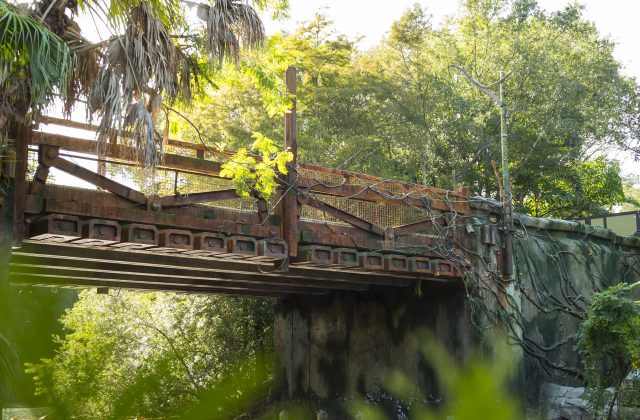 “I think the thing I’m most excited about right now to experience would be everything in Pandora.” Chapek said. “From the place-making to the two extraordinary attractions that will be in the land – both the Na’vi River Journey as well as Avatar Flight of Passage, these promise to set new high-watermarks for our experiential magic we give our guests.”

Chapek shared details of the two, new signature attractions of Avatar Flight of Passage, where guests will fly over the jungles of Pandora on a Mountain Banshee and Na’vi River Journey, a family-friendly boat ride through the bioluminescent forests. He also gave a first look at the new Satu’li Canteen, which is the main dining establishment for Pandora, featuring Na’vi art and cultural items; Windtraders, where travelers can purchase Na’vi cultural items, toys, science kits, and more; and the Pongu Pongu, a drink location with a design that is as eclectic as its Expat owner.

Coming in summer of 2017, Pandora – The World of Avatar will complete the transformation of Disney’s Animal Kingdom. Disney in collaboration with filmmaker James Cameron and Lightstorm Entertainment is bringing to life the mythical world of Pandora, inspired by Cameron’s AVATAR, at Disney’s Animal Kingdom theme park. The awe-inspiring land of floating mountains, bioluminescent rainforests and soaring Banshees will give guests a “transformational experience they will never forget.”

Chapek gave the sneak peek at the updates to an enthusiastic crowd of Disney fans at the “Destination D: Amazing Adventures” conference for D23, the official fan club for The Walt Disney Company. The “Destination D” Convention, held this year at Disney’s Contemporary Resort, also featured a panel by the creative team behind Pandora – The World of Avatar including filmmaker James Cameron, producer Jon Landau and Joe Rohde, Creative Director for Disney’s Animal Kingdom from Walt Disney Imagineering.

Joe Kleimanhttp://www.themedreality.com
Raised in San Diego on theme parks, zoos, and IMAX films, Joe Kleiman would expand his childhood loves into two decades as a projectionist and theater director within the giant screen industry. In addition to his work in commercial and museum operations, Joe has volunteered his time to animal husbandry at leading facilities in California and Texas and has played a leading management role for a number of performing arts companies. Joe has been News Editor and contributing author to InPark Magazine since 2011. HIs writing has also appeared in Sound & Communications, LF Examiner, Jim Hill Media, and MiceChat. His blog, ThemedReality.com takes an unconventional look at the attractions industry. Follow on twitter @themedreality Joe lives in Sacramento, California with his fiancé, two dogs, and a ghost.
Share
Facebook
Twitter
Linkedin
Email
Print
WhatsApp
Pinterest
ReddIt
Tumblr
Previous articleRosa Zeegers to Oversee Location Based Entertainment for National Geographic
Next articleBalich Worldwide Shows Produces Live Performance Celebrating 45 Years of UAE Nationhood