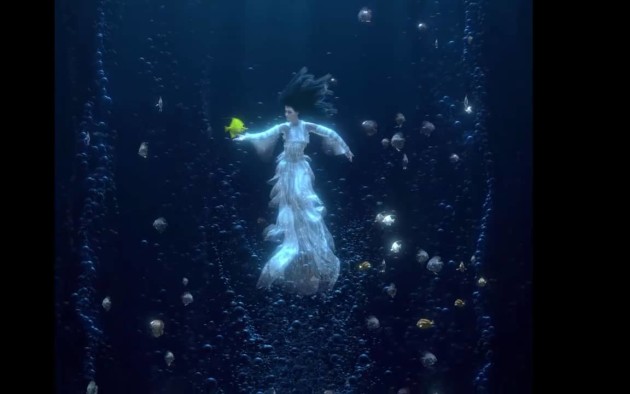 AQUA FEMME stands out as a prime example of top talent from Hollywood’s feature film community bringing their advanced art and technology into the expanding market for large-scale themed entertainment and experiential media installations.

The piece is Produced and Directed by VFX veteran Richard Taylor of XLNT FX with Stacy Burstin, President of Eevolver, Inc., a world-class production studio, from a concept by Warren Noronha, Creative Director for Holonyne Corporation. Jon 9, CEO of Holonyne, is the Director of Production and Programming for the IEMS, and Executive Producer for the Aqua Femme project.

The IEMS, a $50M immersive display system installed throughout the glittering new Tom Bradley International Terminal, is managed by JCDecaux Airports, the Terminal Media Operator for the entire Los Angeles International Airport. The IEMS displays over 12,000 sq ft of high-resolution media using LED technology. Content includes an array of ambient, narrative and branded programming elements designed to enhance the LAX passenger experience. AQUA FEMME will play in daily rotation on the massive Time Tower, an 80-foot high elevator tower that is covered with imagery on four sides. Located in the central atrium of the Terminal, the Time Tower is the largest and most compelling element of the IEMS.

Taylor describes the project as a calming influence in the world of international travel. “In 3 minutes, we tell a complete story about a beautiful underwater mermaid who interacts with the real world and a surfer who gets her attention by dropping a gift of flowers attached to a seashell into the sea.” Burstin adds, “It’s a gorgeous short film that plays on a four-sided 80-foot high digital tower. Aqua Femme beautifully combines many complex CG elements: a large-scale human, hair simulation, cloth simulation, water, bubbles, and interactive lighting.”

The lead character, Aqua Femme, is an underwater angel that magically appears out of a cloud of bubbles. Sunlight streams down from above as tropical fish orbit around her.

Aqua Femme’s gown is comprised of translucent and flowing material similar to translucent and tropical fish. She sees a surfer above and is fascinated, and moves up to investigate. As she rises, she transforms into her mermaid form. An object splashes into the water near the surfer, Aqua Femme is drawn to the object and then pauses, then dives down and disappears into a plume of bubbles. The object floats down and we see that it’s a bouquet of flowers tied with a cord attached to a nautilus shell. The legend of Aqua Femme endures – throw her a bouquet of flowers and your wish will come true.

“Working with Eevolver, Inc. has been great,” says Taylor. With careful planning and design Eevolver, Inc. and I were able to create a beautiful final piece with great production value.” “Eevolver, Inc. created something special and demonstrated high-level expertise that I plan to use in future projects. I can’t thank them enough.”

Burstin is most proud of the material for Aqua Femme’s gown. “It was difficult to create proper flow and translucency of the gown while maintaining the realism of underwater motion. Also, we created bubbles interacting with light and combined it with subaquatic motion to make her dress flow and hair move naturally. It took 3 months overall, from storyboard through delivery.”

Joe Kleimanhttp://wwww.themedreality.com
Raised in San Diego on theme parks, zoos, and IMAX films, InPark's Senior Correspondent Joe Kleiman would expand his childhood loves into two decades as a projectionist and theater director within the giant screen industry. In addition to his work in commercial and museum operations, Joe has volunteered his time to animal husbandry at leading facilities in California and Texas and has played a leading management role for a number of performing arts companies. Joe previously served as News Editor and has remained a contributing author to InPark Magazine since 2011. HIs writing has also appeared in Sound & Communications, LF Examiner, Jim Hill Media, The Planetarian, Behind the Thrills, and MiceChat His blog, ThemedReality.com takes an unconventional look at the attractions industry. Follow on twitter @ThemesRenewed Joe lives in Sacramento, California with his wife, dog, and a ghost.
Share
Facebook
Twitter
Linkedin
Email
Print
WhatsApp
Pinterest
ReddIt
Tumblr
Previous articleDubai EXPO 2020 Official Declares Event Will Have Transformative Effect on Region
Next articleVortex Products Showcased at New Center Parcs Aqua Mundo Attraction