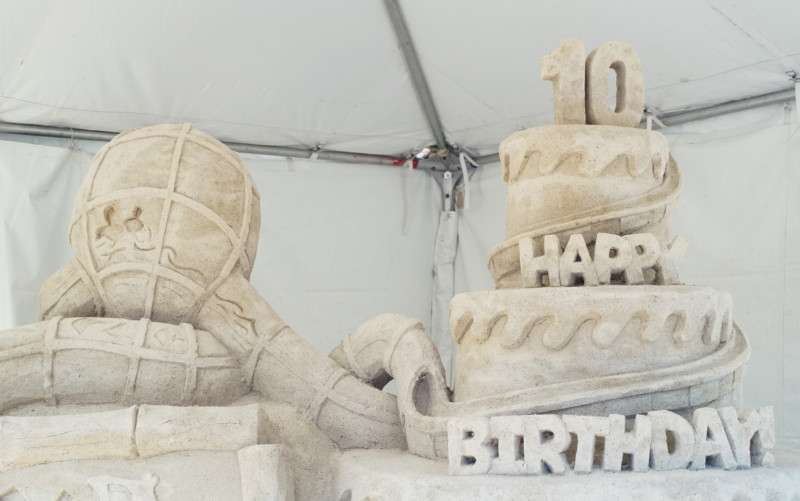 This month, Aquatica Orlando celebrates its first decade of operation. The park, which opened March 1, 2008, quickly became a benchmark on the Orlando waterpark scene and ranks as one of the best water parks in the United States by TripAdvisor®.

To commemorate the park’s special day, Aquatica commissioned the sculpting of a 22-ton sand sculpture depicting a birthday cake inspired by Aquatica’s latest addition, Ray Rush. The sculpture measures 15’ wide, 8’ tall and took skilled artisans nearly 25 hours to complete. The sculpture will be on display inside the park for guests to see through March 5.

The park was also recently voted “Best Water Park” by Orlando Sentinel readers in the publication’s annual Best Bets reader’s choice awards in 2017. “The Sentinel just confirmed what everyone already knew, Aquatica is the place where Orlando residents go when they want the best water park experience,” said David Heaton, Aquatica Orlando vice president. “We are so excited to be the water playground of choice for Orlando locals and visitors alike.”

Aquatica is  only getting better in 2018 with the ultimate birthday gift for park guests, Ray Rush. The new attraction promises to be a fully-loaded water adventure which will combine three unique slide elements, never before seen at the park, into one action-packed attraction families can enjoy together. With a height requirement of only 42”, this all-new triple-fusion family raft ride will allow guests of all ages to slide, splash and soar like never before on a slide that is both thrilling and family-friendly.

Joe Kleimanhttp://wwww.themedreality.com
Raised in San Diego on theme parks, zoos, and IMAX films, Joe Kleiman would expand his childhood loves into two decades as a projectionist and theater director within the giant screen industry. In addition to his work in commercial and museum operations, Joe has volunteered his time to animal husbandry at leading facilities in California and Texas and has played a leading management role for a number of performing arts companies. Joe has been News Editor and contributing author to InPark Magazine since 2011. HIs writing has also appeared in Sound & Communications, LF Examiner, Jim Hill Media, and MiceChat. His blog, ThemedReality.com takes an unconventional look at the attractions industry. Follow on twitter @ThemesRenewed Joe lives in Sacramento, California with his fiancé, two dogs, and a ghost.
Share
Facebook
Twitter
Linkedin
Email
Print
WhatsApp
Pinterest
ReddIt
Tumblr
Previous articleDay Two of TEA Summit To Showcase 2018 Thea Award Recipients
Next articleLeVar Burton to Narrate Crowd-Sourced Giant Screen Film “In Saturn’s Rings”