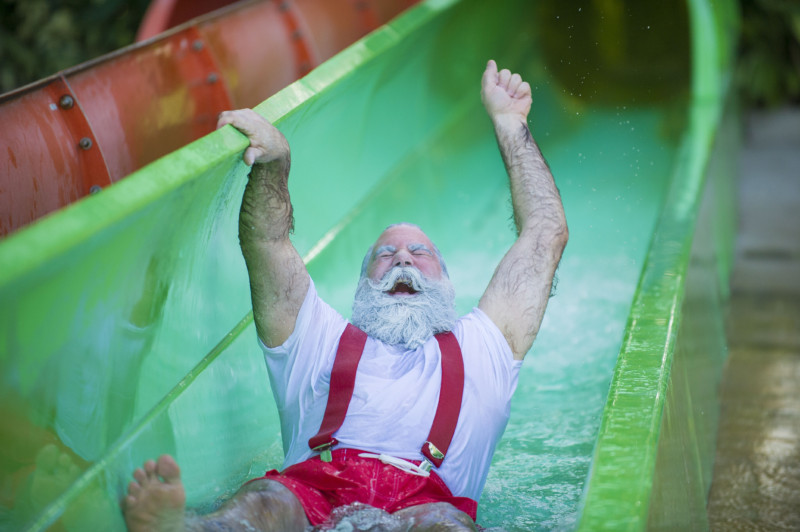 With Christmas Eve just around the corner, the jolly man himself – Santa Claus – made an impromptu stop at Aquatica, SeaWorld’s Waterpark to practice for his night of chimney descents on Ihu’s Breakaway Falls. At nearly 80-feet tall, Ihu’s Breakaway Falls is Orlando’s tallest, steepest, and only multi-drop tower slide of its kind. Although Santa manages to maneuver his way down countless chimneys around the world each Christmas Eve, the exhilarating drop from the breakaway boxes is unlike any rooftop experience he has encountered before.

On the opposite side of the country, People’s Choice award winning actress Stana Katic and her 5-year-old niece Sophia helped Santa pull the switch to light the world’s largest LEGO Christmas tree at LEGOLAND® California Resort during the 14th annual tree lighting ceremony in Carlsbad, California.

Katic, popularly known for her starring role as NYPD homicide detective Kate Beckett in the ABC hit series “Castle,” spent the day enjoying all the attractions at LEGOLAND with her niece and said she was thrilled to be a part of the ceremony and to see the new hotel.

“I hope we get an invite to come back and be one of the first to visit the Castle Hotel,” said Katic.

“To me, it’s amazing if you can invest in a child’s health and education because then we are taking care of the next hundred years of our existence,” said Katic.

“Children’s Hospital Los Angeles relies on the generosity of the community to support its groundbreaking pediatric research and the complex care it provides for critically ill and injured children,” said Vice President of Foundation Development for Children’s Hospital Los Angeles Robert Weiner. “It is an honor to receive this donation from Stana and LEGOLAND California Resort as it helps us continue to provide the best possible care for children.”

Guests at the ceremony were not only treated to a sneak peek of the new LEGO NINJAGO rooms coming to LEGOLAND Hotel next year, but also saw new renderings of the Castle Hotel breaking ground in January and, of course, had a visit from Santa!

The tree lighting ceremony is part of LEGOLAND California Resort’s winter celebration, Holidays at LEGOLAND California. Now through January 1, 2017, Heartlake City has been transformed into a winter wonderland for guests to enjoy. Kids can sing and dance as they watch the LEGO Friends live holiday show and join in building activities in the Heartlake City stables. Occasional snow flurries and a traveling brass band playing festive bluegrass music will fill Heartlake City with the feeling of winter. Guests can also enjoy character meet and greets with LEGO Santa and a LEGO toy soldier and collect holiday inspired pop badges. Plus, families can ring in 2017 with San Diego’s biggest Kids’ New Year’s Eve Party on Dec. 31. All Holidays activities are included with regular Park admission.