By Joe Kleiman
September 12, 2017
Facebook
Twitter
Linkedin
Email
Print
WhatsApp
Pinterest
ReddIt
Tumblr
Specialized Expo 2017 Astana drew to a close on September 10, following a three-month journey in the the theme of “Future Energy.” Staged in the Republic of Kazkhstan’s young capital city, the first Expo in Central Asia concluded with a closing ceremony led by Nursultan Nazerbayev, President of the Republic of Kazakhstan. 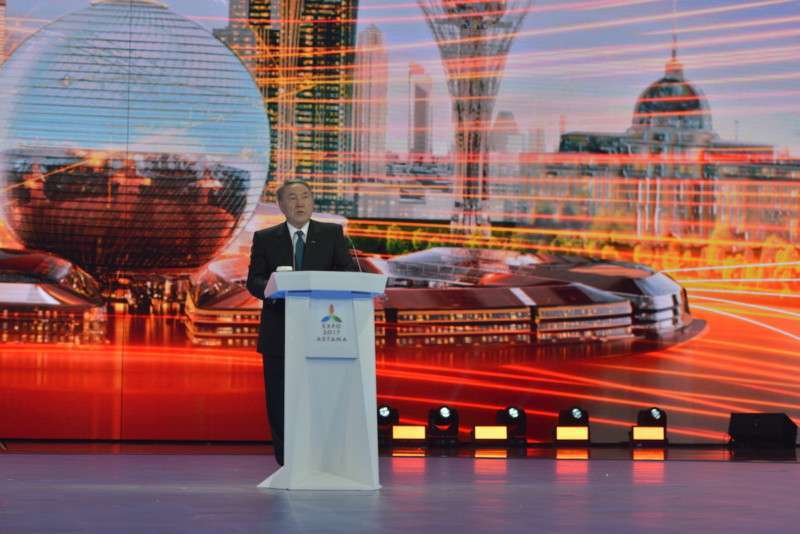 “The Expo has been a success. This is one of Kazakhstan’s most brilliant achievements since its independence”, declared President Nazerbayev during the closing ceremony, which was attended by 18 heads of State and government, National Commissioners, BIE Officials, Expo staff and volunteers.

The Secretary General of the Bureau International des Expositions (BIE), Vicente G. Loscertales made a video address, declaring: “Expo 2017 Astana has united the world on its site and has inspired the international community, international participants, the private sector and civil society to renew their commitment to a sustainable future.” The Secretary General expressed his gratitude to President Nazarbayev as well as to the Organisers, Participants and volunteers for making the Expo such a success. 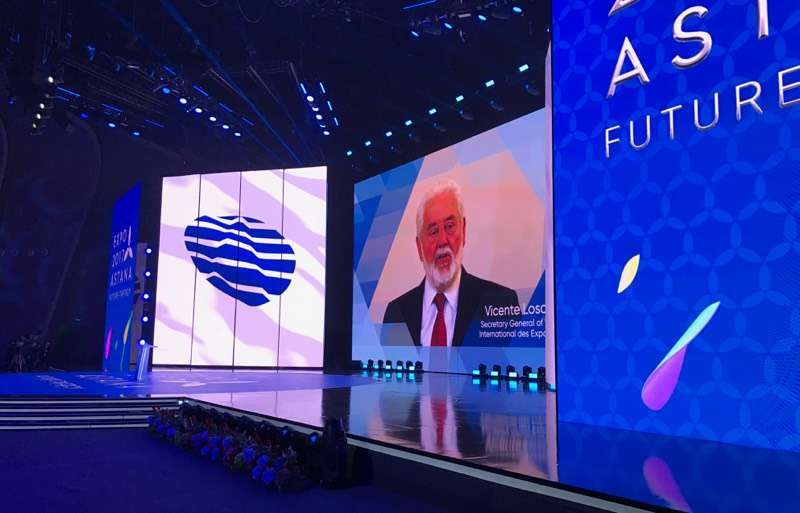 115 countries and 22 international organisations participated in Expo 2017, offering visitors a global picture of the challenges and opportunities raised by the “Future Energy” theme through educational, entertaining and immersive pavilions. Gathering policymakers, experts and business leaders through an array of events and meetings, the Expo has been a centre of discussion allowing global players to discuss the state of energy today and to shape the agenda for the future. The Future Energy Forum, a series of 12 conferences, was held within the framework of the Expo, resulting in the ‘Manifesto of Principles and Values’, a blueprint with lasting guidelines for a global energy transition.

With an average of over 50,000 visitors per day in its final weeks, four million visitors attended the Expo before its gates closed to the public on Sunday evening. Dozens of cultural events each day proved just as popular as the thematic and international pavilions, as visitors from all over Kazakhstan and further afield flocked in increasing numbers to the Expo site. Marked by a spectacular light and sound show as well as energy-themed performances, the closing ceremony was the last of over 3,000 cultural and thematic events held throughout the 93 days of the Expo.

Centred around the 80-metre “Nur Alem” sphere, the Adrian Smith and Gordon Gill-designed Expo site spans 25 hectares, creating a brand new district of Kazakhstan’s capital city. The Nur Alem sphere will continue to be a popular attraction with its Museum of Future Energy, while the rest of the site will be host to business and research activities, including the newly created Astana International Financial Centre.

The next Specialized Expo will take place in either 2022/23, with the 170 Member States of the Bureau International des Expositions (BIE) to elect the host country during its 162nd General Assembly on 15 November 2017. Three candidates are seeking to organize the next Specialized Expo: Poland (Łódź), the United States (Minneapolis) and Argentina (Buenos Aires).

The BIE Day Awards Ceremony was held on September 9, during which the recipients of the Expo 2017 Official Participant Awards were announced. Held on the eve of the closing of each Expo, the Awards Ceremony, which includes the attribution of BIE Medals and Certificates, celebrates all those who have made major contributions to the success of the event.

An international jury composed of nine members visited each pavilion of the 115 countries and 22 international organisations participating in Expo 2017 Astana. Split into four different categories according to the size of the country’s participation, Official Participant Awards were granted either for Exhibition Design or for the development of the “Future Energy” theme.

A total of 24 gold, silver and bronze awards were handed out during the ceremony, which took place in the presence of the Prime Minister of Kazakhstan, Bakytzhan Sagintayev, as well as the President of the General Assembly, Steen Christensen, and the Deputy Secretary General of the BIE, Dimitri Kerkentzes.

Among Type A pavilions (more than 700m2), Russia received the Gold Award for Exhibition Design. The Silver Award went to the United Kingdom, and Bronze went to the Republic of Korea. Among Type B pavilions (between 400m2 and 700m2), Qatar was granted the Gold Award for Exhibition Design, with Azerbaijan receiving Silver and Monaco receiving Bronze. For Theme Development, the Gold Award for Type B pavilions was given to Switzerland, with Hungary receiving Silver and India receiving Bronze. For Type C pavilions (less than 400m2), the Gold Award for Exhibition Design was granted to Poland, with Silver going to Slovakia and Latvia taking Bronze. For Theme Development among Category C pavilions, Finland received the Gold Award. Silver and Bronze were awarded to Singapore and the Czech Republic, respectively. An Honorable Mention was given to the International Organisation Joint Pavilion.

At the end of each Expo, the BIE awards medals and certificates of merit to organisations and individuals who have made extraordinary contributions to the success of the Expo.

The Gold Medal, the BIE’s highest honor, was awarded to the President of the Republic of Kazakhstan, Nursultan Nazerbayev in recognition of his personal engagement in bringing Expo 2017 to Astana and making it such a success. The award was accepted on his behalf by the Prime Minister, Bakytzhan Sagintayev. A Gold Medal was also given to the International Participants of Expo 2017 for their collective support and their spirit of cooperation and partnership. The award was received by Romas Jankauskas, Chairperson of the College of Commissioners and Steering Committee, Commissioner of Lithuania.

The Astana Expo 2017 National Company, the organiser of the Expo, was awarded a BIE Medal of Honour in recognition of the dedication of its entire organizing team in planning and executing the event, with Chairman Akhmetzan Yessimov receiving the award. The second Medal of Honour was awarded to the City of Astana for integrating the Expo into its strategic vision and day-to-day life, with Mayor Adilbek Zhaksybekov receiving the award. The third Medal of Honour was awarded to the Commissioner of Expo 2017, Rapil Zhoshybayev, for putting together a truly international Expo.

Certificates of Merit were awarded by the BIE to Expo 2017 Volunteers in recognition of their essential support to Organizers, Participants and visitors. The second Certificate was awarded to the Press and Media who covered Expo 2017, recognizing their role in promoting and communicating the Expo.

Joe Kleimanhttp://wwww.themedreality.com
Raised in San Diego on theme parks, zoos, and IMAX films, InPark's Senior Correspondent Joe Kleiman would expand his childhood loves into two decades as a projectionist and theater director within the giant screen industry. In addition to his work in commercial and museum operations, Joe has volunteered his time to animal husbandry at leading facilities in California and Texas and has played a leading management role for a number of performing arts companies. Joe previously served as News Editor and has remained a contributing author to InPark Magazine since 2011. HIs writing has also appeared in Sound & Communications, LF Examiner, Jim Hill Media, The Planetarian, Behind the Thrills, and MiceChat His blog, ThemedReality.com takes an unconventional look at the attractions industry. Follow on twitter @ThemesRenewed Joe lives in Sacramento, California with his wife, dog, and a ghost.
Share
Facebook
Twitter
Linkedin
Email
Print
WhatsApp
Pinterest
ReddIt
Tumblr
Previous article
Irma Update 9/11
Next article
Wings Over Washington: Cultural Entertainment Taken To New Heights