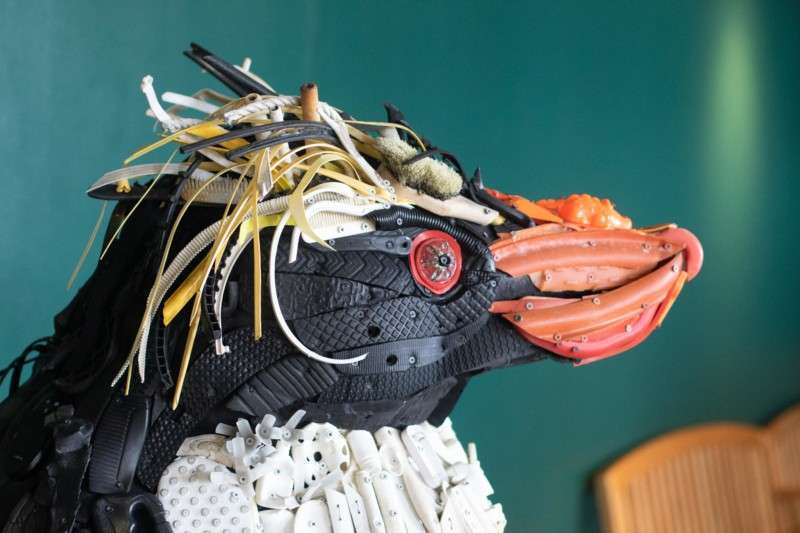 “Washed Ashore: Art to Save the Sea’’ – the popular conservation exhibit now on display at Audubon Aquarium of the Americas and Audubon Zoo – is expanding.

Just like those that arrived earlier, the new additions to the collection feature larger-than-life aquatic animal sculptures crafted from plastic trash collected from Pacific Coast beaches. All the sculptures will be on display at the Aquarium and the Zoo through April 30, 2019.

Pozzi’s exhibit, which Audubon welcomed on July 27, is designed to educate a global audience about the threat that plastic pollution poses for the ecosystems of the world’s oceans and waterways.

Assembled entirely from plastic trash, the sculptures offer visitors a powerful, visual reality of the proliferation of pollution in the world’s waterways through marine animal representations that use thousands of pieces of debris in practically every color of the rainbow.

A close look at the sculptures reveals the myriad of items used to construct the artworks – everything from toothbrushes, a duck decoy, a baby pacifier and a toilet seat to a car bumper, buoys, bleach bottles, bait traps and flip flops.

“I hope that placing these marine debris sculptures near some of the animals affected by this tragedy offers an opportunity for Aquarium visitors to stop and think about how they can make a difference,” said Pozzi, Artistic Director and Lead Artist for the Washed Ashore Project. “Plastics have entered all marine habitats and every level of the ocean food chain and whales, fish, zooplankton and numerous other animals are eating the trash.”

Experts estimate that 80 percent of marine debris comes from land-based sources – streets to streams to rivers to oceans.

The not-for-profit Washed Ashore Project was created in 2010 after Pozzi witnessed mounds of plastic trash piling up on formerly pristine beaches along her native Oregon coast. She organized all-volunteer cleanups and used the collected trash – washed and sorted – to create massive, realistic sculptures of sea animals most affected by the pollution.

Since the project began, more than 10,000 volunteers have participated, collecting, washing and hand stitching parts of sculptures. More than 42,000 pounds of plastic pollution have been collected from over 300 miles of beaches and turned into more than 70 sculptures that tour the country.

The exhibit is included with a general admission ticket to the Aquarium or the Zoo.

Joe Kleimanhttp://wwww.themedreality.com
Raised in San Diego on theme parks, zoos, and IMAX films, InPark's Senior Correspondent Joe Kleiman would expand his childhood loves into two decades as a projectionist and theater director within the giant screen industry. In addition to his work in commercial and museum operations, Joe has volunteered his time to animal husbandry at leading facilities in California and Texas and has played a leading management role for a number of performing arts companies. Joe previously served as News Editor and has remained a contributing author to InPark Magazine since 2011. HIs writing has also appeared in Sound & Communications, LF Examiner, Jim Hill Media, The Planetarian, Behind the Thrills, and MiceChat His blog, ThemedReality.com takes an unconventional look at the attractions industry. Follow on twitter @ThemesRenewed Joe lives in Sacramento, California with his wife, dog, and a ghost.
Share
Facebook
Twitter
Linkedin
Email
Print
WhatsApp
Pinterest
ReddIt
Tumblr
Previous articleSony Pictures and Two Bit Circus to be among presenters at Entertainment Experience Evolution Conference
Next articleIMERSA issues call for fulldome and 3D audio submissions for 2019 Summit