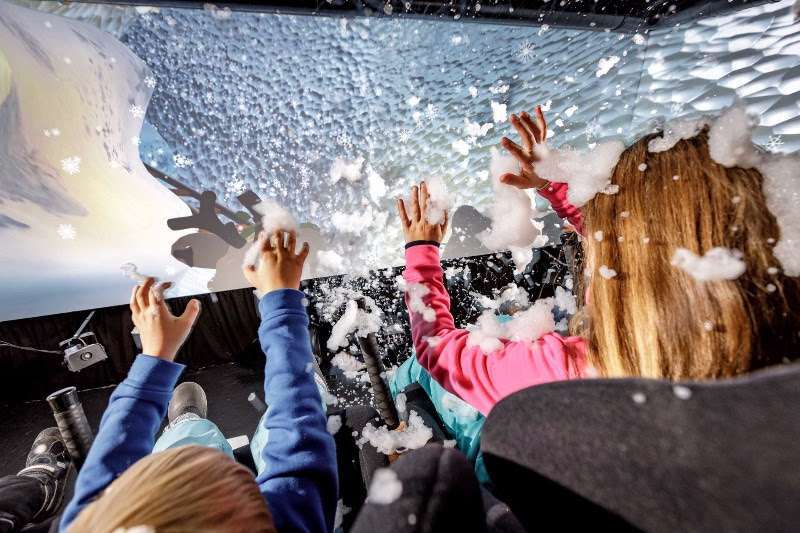 The German aufwind Group, one of Baden-Wuerttemberg’s largest advertising and web-design agencies, was approached by the Schiregion (skiing region) Hochoetz Erschließungs‑GmbH & CO KG to design and realize a 5D cinema close to the Austrian Acherkogelbahn cable car mountain station.

The recent project for the skiing region Hochoetz revolved around the creation of just such a 5D cinema, that would combine multiple media to tell the story of the WIDIVERSUM, with the help of a 180° projection. The WIDIVERSUM itself is the world of the Oetztal mascot WIDI, an extraordinarily adventurous mountain sheep.

Set in front of a picturesque alpine background at 2020m and inside the building of the Panoramarestaurant Hochoetz, the cinema can be found right next to the mountain station of the Acherkogelbahn cable car.

Surrounded by a modern cinema interior with a capacity for ten seats, visitors will be transformed into the protagonists of an eight minute long adventure ride, that unfolds on a 180° projection screen in front of them. During those eight minutes, they will get to know WIDI and his friends a little better, whilst chasing after a crystal that was stolen by a wolf. Flying and hovering and many additional and digitally controlled multi-sensorial effects ensure pure excitement.

The simulator platform itself is comprised of a 360° swivel joint, four Optoma short throw 5,000 lumen projectors were used for the projection. Content playout and video mapping were realized using PIXERA with integrated VIOSO auto calibration, as well as AV Stumpfl AVIO Show Control.

aufwind Group CEO Lutz Bayer Geschäftsführer Lutz Bayer commented on the use of PIXERA: “We are always looking for innovative and reliable solutions for our international installation projects. We’ve had very good experiences with products from AV Stumpfl, which is why we decided to use PIXERA for the WIDIVERSUM project. Projection content playout, mapping, warping and the control of the film via UDP were all done with PIXERA. It was mainly the intuitive usability approach of this new product  and the Vioso integration that really convinced us. The client is very satisfied with the final results and especially the happy faces of the young visitors of the WIDIVERSUM-cinema leave us with no doubt, that our movie shuttle is truly great entertainment.”

Joe Kleimanhttp://wwww.themedreality.com
Raised in San Diego on theme parks, zoos, and IMAX films, InPark's Senior Correspondent Joe Kleiman would expand his childhood loves into two decades as a projectionist and theater director within the giant screen industry. In addition to his work in commercial and museum operations, Joe has volunteered his time to animal husbandry at leading facilities in California and Texas and has played a leading management role for a number of performing arts companies. Joe previously served as News Editor and has remained a contributing author to InPark Magazine since 2011. HIs writing has also appeared in Sound & Communications, LF Examiner, Jim Hill Media, The Planetarian, Behind the Thrills, and MiceChat His blog, ThemedReality.com takes an unconventional look at the attractions industry. Follow on twitter @ThemesRenewed Joe lives in Sacramento, California with his wife, dog, and a ghost.
Share
Facebook
Twitter
Linkedin
Email
Print
WhatsApp
Pinterest
ReddIt
Tumblr
Previous article
Image Engineering to distribute full range of 7thSense Design and Medialon products in India
Next article
Alcorn McBride equipment plays theatrical role at “Hamilton: The Museum Exhibition”