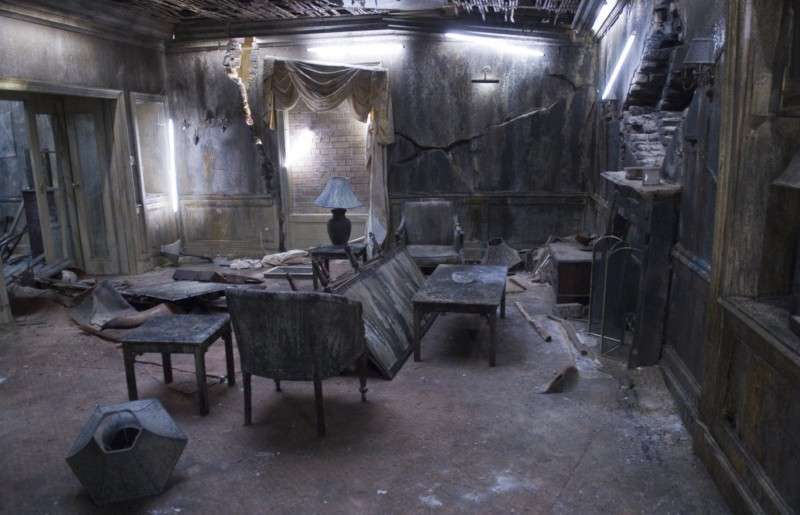 The Walibi theme park in Wavre near Brussels (Belgium) is renowned for its Halloween spectacular, when its rides are ghoulishly transformed. Awarded best Halloween attraction in Europe for three consecutive years – 2014, 2015 and 2016 – in the prestigious Diamond Theme Park Awards, expectations were very high for Walibi at the end of last year, and with the help of AV Stumpfl’s Wings IObox hardware module platforms, they were surpassed with the creation of Asylum.

The brief for Asylum was to transform a ride into a haunted house while making use of the latest automated AV technology to create an immersive and unforgettable experience for the public. DW Production was engaged to build from scratch all rooms and aesthetic decoration for the attraction as well as the music and effects and animatronics, with GSF Events taking the lead on the technical aspects of the ride with the help of AV Stumpfl’s distributor AED.

DW Production’s owner David Collet explains the narrative behind Asylum: “An old mansion house – once an asylum but since abandoned – is home to a vampire named Igor. He occupies himself by locking up and experimenting on zombies to turn them into vampires. He finds himself disturbed by human visitors during Halloween and decides to let them in in the hope they will be more receptive to his experiments. Unbeknownst to the visitors, they will be victims of captive zombies gone mad – in addition to whatever Igor has in store for them.”

This story unfolds as visitors to the attraction pass through a series of eight rooms in total, starting with Igor’s hotel reception-style desk, moving into the dormitory where zombies are starved and made dependent. From there, thrill-seekers move along Igor’s access corridor with haunted mirror, into the canteen where hungry zombies await their meal. Next up is the bat-infested corridor with collapsing ceiling, followed by Igor’s experiment room. Finally, the cellar where Igor realises humans are more use to him than zombies, and the labyrinth where humans are trapped in endless corridors.

It was clear that Asylum would need a robust and powerful solution to handle the seamless automation of hundreds of interactions; weather the heavy footfall and deliver on reliability – and of course, simultaneously delight and frighten all who passed through the haunted doors.

Sammy Freh, Managing Director of GSF Events, concurs: “When DW Production asked us to develop a special electronic system for the ride, our project manager and engineer John Gillard recommended using AV Stumpfl. In this kind of environment, reliability is critical, and we knew that they could provide a trusted network interface module which would not let Walibi down, and avoid potential downtime and issues.”

DW Production built Asylum from scratch in just five weeks, with GSF taking only one week to programme the technology and lighting. Collet elaborates: “It was a real challenge in terms of timing and execution to take an existing 800m² bumper car ride and completely transform it into a haunted house attraction. We also faced a number of constraints as we were not allowed to fix any type of rigging to the walls, floor, ceiling or roof!”

The challenges were faced head on and ably overcome. GSF specified one IObox DMX and one IObox Relay module, along with an external sound card to manage a total of 28 audio channels, all controlled by an AV Stumpfl main server for a multi-room audio immersion. This network allowed for seamless integration and management of video content, audio stream and animation triggers.

DW was responsible for writing the script for each room and GSF programmed the network and modules. Asylum ran for the whole duration without a single technical failure. 30 actors were present in the attraction but no technician was needed, thanks to the automatic cues delivered by AV Stumpfl’s solid state modules, which made the public the cue manager as they experienced the ride. The attraction was completely managed with a single start/stop button.

Freh asserts that only AV Stumpfl’s network interface modules were capable of doing such a task: “I believe that AV Stumpfl’s modules are the only ones on the market capable of doing this job – its focus is on the management of the interaction between elements, rather than just handling video. Not only that, the support we received from Dave Vos at AED was second to none throughout the integration process – from help with programming to on-site training, we couldn’t have asked for more and were thoroughly impressed by the team. Working mostly at night, we even scared ourselves with our own programming!”

The ability to automate the entire process of the ride end to end meant that there was no need for technicians in a control room. In addition to their reliability, the AV Stumpfl modules delivered significant cost savings, not to mention peace of mind.

Freh adds: “Process automation has ensured smooth-running which in turn enhanced the visitors’ experience – of which there were record numbers, with up to 500 people queuing for the attraction at times. AV Stumpfl’s modules are a true innovation which will likely transform interactive rides for the attraction business.”

Concludes Horst Damoser, global business development manager at AV Stumpfl: “Asylum at Walibi demonstrates the extent of the wide ranging capabilities our Wings IObox network module has, especially when used in conjunction with our Avio network protocol and control logic system. Its application in this ride draws on all of its key features, creating a spectacular, immersive experience. We look forward to our customers working on more exciting projects like this in future, pushing the boundaries of what can be achieved.”

Joe Kleimanhttp://wwww.themedreality.com
Raised in San Diego on theme parks, zoos, and IMAX films, InPark's Senior Correspondent Joe Kleiman would expand his childhood loves into two decades as a projectionist and theater director within the giant screen industry. In addition to his work in commercial and museum operations, Joe has volunteered his time to animal husbandry at leading facilities in California and Texas and has played a leading management role for a number of performing arts companies. Joe previously served as News Editor and has remained a contributing author to InPark Magazine since 2011. HIs writing has also appeared in Sound & Communications, LF Examiner, Jim Hill Media, The Planetarian, Behind the Thrills, and MiceChat His blog, ThemedReality.com takes an unconventional look at the attractions industry. Follow on twitter @ThemesRenewed Joe lives in Sacramento, California with his wife, dog, and a ghost.
Share
Facebook
Twitter
Linkedin
Email
Print
WhatsApp
Pinterest
ReddIt
Tumblr
Previous articleLucas Museum of Narrative Art Breaks Ground in LA’s Exposition Park
Next articleScott Wellington Leaves Yas Island to Become GM of Wadi Adventure