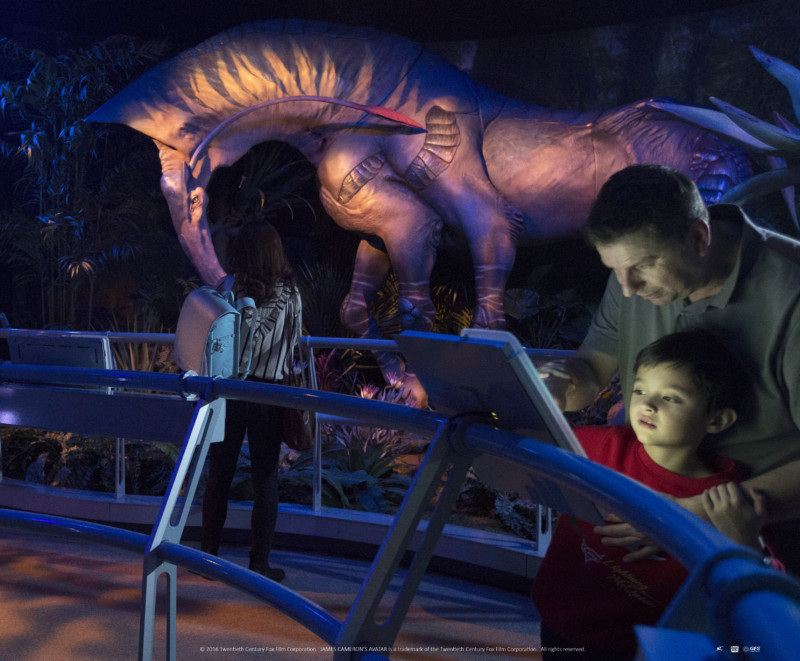 “The premiere of the exhibition marks the culmination of more than two years of work to bring James Cameron’s vision of Pandora to audiences around the world and we are thrilled to make Taiwan the first stop of the exhibition’s five-year global tour,” said Eddie Newquist, chief creative officer and EVP at GES.  “GES is proud to lead the creative efforts of the artists, engineers, designers and craftsmen who infused the entire exhibition with the artistry, innovation and quality of James Cameron’s AVATAR.

”Presenting Pandora as a real place, this unique, hands-on exhibition gives visitors the opportunity to experience the science and the wonder of Pandora right here on earth.  Both entertaining and educational, the exhibition showcases a series of exciting and engaging immersive environments that highlight Pandora’s diverse and exotic flora and fauna, along with the amazing culture and mythology of its indigenous people, the Na’vi.

“So much of what we learn about Pandora can inspire us to be more curious and thoughtful about the world around us,” said Kathy Franklin, President, Franchise Development at Lightstorm Entertainment.  “This exhibition gives us the opportunity to take guests on a fascinating journey that we hope will give them new insights about both the rich and detailed alien world created in AVATAR and the amazing Earth we all share.”

Greg Lombardo, SVP of Global Live and Location Based Entertainment, 20th Century Fox Location Based Entertainment added: “With great attention to detail, highly-interactive touch points, and a strong foundation in science, this exhibition delivers a truly memorable experience inspired by James Cameron’s remarkable film. We are thrilled to launch AVATAR: Discover Pandora in Taiwan followed by a rollout across additional worldwide cities — leading up to the highly-anticipated sequels of AVATAR.”

“GES is thrilled to launch this spectacular touring exhibition,” said Steve Moster, President of GES, and President and Chief Executive Officer of Viad Corp.  “From concept to creation, GES’ visionary team designed an experience that will amaze visitors. The wonders of Pandora come to life through immersive, interactive displays that are true to the blockbuster AVATAR brand, and we are proud to premiere this interactive exhibition in the Asia-Pacific market.”

Visitors embark on an exploration highlighting Pandora’s stunning landscape and its exotic wildlife and engage with more than a dozen multi-sensory interactives which allow them to see, feel, hear and even smell the wonders of Pandora.

Featuring captivating settings such as the Hallelujah Mountains and Tree of Souls, as well as life-sized recreations of creatures including the Banshee, Direhorse, and Viperwolf, visitors to AVATAR: Discover Pandora will be able to experience the science and wonder of Pandora firsthand.  The dynamic guest experience will allow visitors to:

·         Enter an exhibition curated by the Pandoran Research Foundation where they will leave the 21st century behind and step into the 22nd century world of the AVATAR franchise;

·         Learn about space travel and the history behind the discovery of Pandora in the Alpha Centauri solar system;

·         Explore recreations of Pandora’s most compelling environments showcasing its unique plants and animals and what they can teach us about our own planet;

·         Engage in interactive activities based on the culture, language and music of the Na’vi, the nine-foot-plus-tall humanoids who are the indigenous people of Pandora;

·         Experience the jewel-like glow of Pandora’s bioluminescent plants and animals;

·         Interact with banshees, learn to operate an AMP suit, picture themselves as part of the Avatar Program.

Released in 2009, James Cameron’s AVATAR is the highest-grossing film in motion-picture history, with a box-office gross of nearly $2.8 billion.  Mesmerizing all ages across the globe with its otherworldly visuals and groundbreaking special effects, the film quickly became a worldwide phenomenon so popular it will be followed by four sequels, with the first sequel due for release in late 2018.  AVATAR was named best picture at the Golden Globe Awards and won numerous Academy Awards®.

Joe Kleimanhttp://wwww.themedreality.com
Raised in San Diego on theme parks, zoos, and IMAX films, InPark's Senior Correspondent Joe Kleiman would expand his childhood loves into two decades as a projectionist and theater director within the giant screen industry. In addition to his work in commercial and museum operations, Joe has volunteered his time to animal husbandry at leading facilities in California and Texas and has played a leading management role for a number of performing arts companies. Joe previously served as News Editor and has remained a contributing author to InPark Magazine since 2011. HIs writing has also appeared in Sound & Communications, LF Examiner, Jim Hill Media, The Planetarian, Behind the Thrills, and MiceChat His blog, ThemedReality.com takes an unconventional look at the attractions industry. Follow on twitter @ThemesRenewed Joe lives in Sacramento, California with his wife, dog, and a ghost.
Share
Facebook
Twitter
Linkedin
Email
Print
WhatsApp
Pinterest
ReddIt
Tumblr
Previous articleGroundbreaking Takes Place for Jack Rouse Associates Designed Appleton Estate Rum Tour
Next articleScruffy Dog Seeks New Talent to Supplement Company’s Global Growth