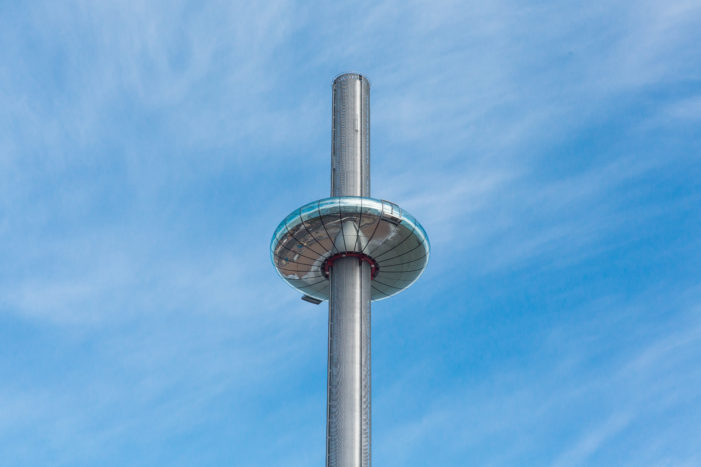 Groups of up to 200 visitors glide up gently to a height of 138 metres in a futuristic, fully enclosed, hand-crafted glass viewing pod to admire breath-taking 360-degree views across Brighton, the South Downs and the beautiful south coast.

While onboard the pod, visitors are also be able to enjoy a drink at the Nyetimber Sky Bar as they admire the panoramic views unfolding before them.

Twelve years in the making, British Airways i360 is the brainchild of architect-entrepreneurs David Marks and Julia Barfield of Marks Barfield Architects, best known as the practice that conceived and designed the world-famous London Eye.

With echoes of the opening of Brighton’s majestic West Pier 150 years ago, extraordinary vision and world-class engineering has led to the creation of British Airways i360, which has an elegant, modern design that looks to the future while respecting the heritage of the site.

“The glass viewing pod, ten times the size of a London Eye capsule and capable of carrying up to 200 passengers, will slowly rise up a slender steel tower to a height of 450 feet to provide passengers with stunning views of Brighton and Hove and a beautiful panorama of the south coast and English Channel.”

“Today we would like to thank all those who have supported the project over the past twelve years. It has been a fantastic team effort and we would like to pay tribute to all the people that have contributed to make British Airways i360 a reality.”

British Airways director of strategy and MD Gatwick Lynne Embleton said: “Brighton is home to thousands of our customers and colleagues and every year we bring more people to the UK than any other airline. British Airways i360 has been constructed from materials sourced from nine different countries, the steel tower is from the Netherlands, the glass from Italy and the tower dampers have flown more than 9,000 miles from Australia – so like us it’s very well-travelled! We are delighted to be involved in this landmark attraction which we are sure will quickly establish itself as a great British landmark and a must-visit for overseas visitors travelling to the UK.”

Tickets can be booked at BritishAirwaysi360.com or by calling 03337 720 360 (a £2 surcharge will be added to each booking made by telephone). Bookings can also be made at the British Airways i360 ticket office.

Joe Kleimanhttp://wwww.themedreality.com
Raised in San Diego on theme parks, zoos, and IMAX films, InPark's Senior Correspondent Joe Kleiman would expand his childhood loves into two decades as a projectionist and theater director within the giant screen industry. In addition to his work in commercial and museum operations, Joe has volunteered his time to animal husbandry at leading facilities in California and Texas and has played a leading management role for a number of performing arts companies. Joe previously served as News Editor and has remained a contributing author to InPark Magazine since 2011. HIs writing has also appeared in Sound & Communications, LF Examiner, Jim Hill Media, The Planetarian, Behind the Thrills, and MiceChat His blog, ThemedReality.com takes an unconventional look at the attractions industry. Follow on twitter @ThemesRenewed Joe lives in Sacramento, California with his wife, dog, and a ghost.
Share
Facebook
Twitter
Linkedin
Email
Print
WhatsApp
Pinterest
ReddIt
Tumblr
Previous articleHollow Studios Creates Virtual Reality Horror Experiences with Cedar Fair Parks
Next articleTRON Realm Brings Conceptual Car Design to Shanghai Disneyland