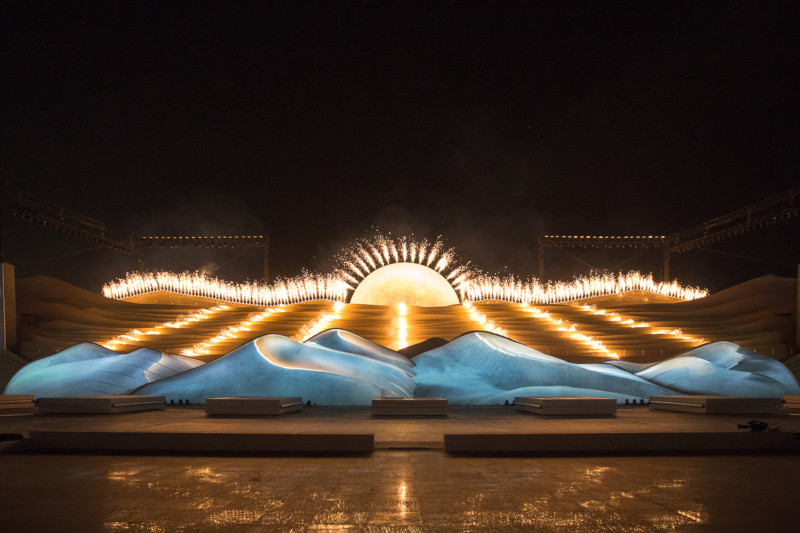 The show, performed in front of a selected crowd of dignitaries, was a tribute to the many facets of the country and of its 45 years of history since the unification. The recurring theme of the show was a promise of the people to the nation itself: “The Country is Amanah”.

Amanah is one of the most meaningful and important words in the Arab world. It can be translated as trust, reliability, loyalty and honesty. It’s the word that could be whispered from a mother to her child or pledged by the Leaders of UAE to their citizens. Amanah is deeply rooted in the history and traditions of the United Arab Emirates: is the promise of protection.

Each act of the show highlights the character and the indomitable spirit of the Emirati people: from the dreamy memory of the past to the advent of The Late Sheikh Zayed bin Sultan Al Nahyan, that changed the nation forever.

The show represented the unbreakable bonds of tradition and the prosperity yet to come as a great wall, made of values and vision, that embraces and protects with strong arms open in hospitality. The soul of the show was the simple power of a promise with the people and the armed forces proclaiming it loudly, and with heads unbowed.

Balich Worldwide Shows was previously chosen to produce the experience of the “Mother of the Nation” celebration and the “Burj Khalifa show” in March.

Joe Kleimanhttp://wwww.themedreality.com
Raised in San Diego on theme parks, zoos, and IMAX films, InPark's Senior Correspondent Joe Kleiman would expand his childhood loves into two decades as a projectionist and theater director within the giant screen industry. In addition to his work in commercial and museum operations, Joe has volunteered his time to animal husbandry at leading facilities in California and Texas and has played a leading management role for a number of performing arts companies. Joe previously served as News Editor and has remained a contributing author to InPark Magazine since 2011. HIs writing has also appeared in Sound & Communications, LF Examiner, Jim Hill Media, The Planetarian, Behind the Thrills, and MiceChat His blog, ThemedReality.com takes an unconventional look at the attractions industry. Follow on twitter @ThemesRenewed Joe lives in Sacramento, California with his wife, dog, and a ghost.
Share
Facebook
Twitter
Linkedin
Email
Print
WhatsApp
Pinterest
ReddIt
Tumblr
Previous articleDisney Parks Chairman Bob Chapek Gives Preview Look at Pandora – The World of Avatar
Next articlePGAV Destinations’ Jim Wible to Present at TEDx Gateway Arch December 10