VIDEO: Presentations to the BIE by the 2025 Expo Candidates

Japan (Osaka), Russia (Ekaterinburg), Azerbaijan (Baku) and France (Greater Paris) each presented a more detailed idea of their projects for World Expo 2025 during the 162nd General Assembly of the Bureau International des Expositions (BIE) on November 15.

These presentations to delegates of BIE Member States were the first ones since candidates submitted their bid dossiers, detailing the full Expo project, in late September 2017. In early 2018, BIE Enquiry Missions will be carried out in each candidate country to assess each bid individually. Candidates will have the chance to present again to delegates in June 2018 and in November 2018, when the final vote will take place during the BIE’s 164th General Assembly. 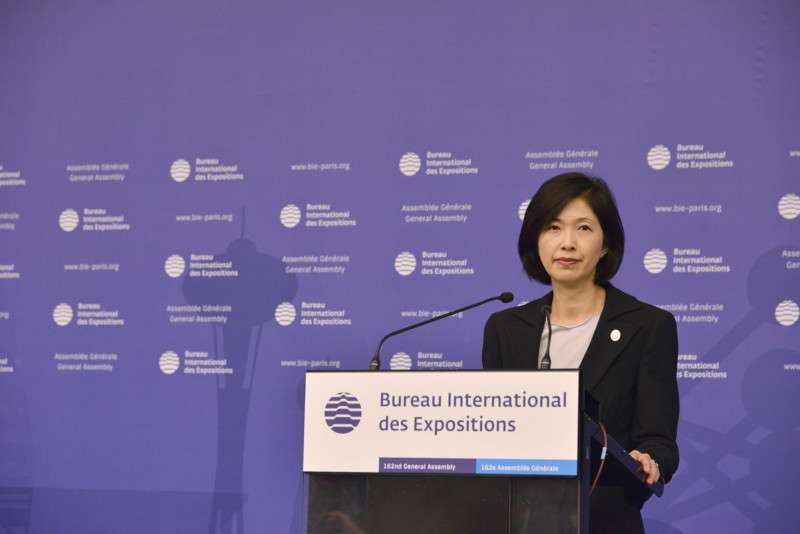 Japan’s bid was presented by Chieko Fujita, of POLY-GLU social business, Rwandan entrepreneur and Osaka resident Joachim Rutayisire, and by the mayor of Osaka, Hirofumi Yoshimura.

Via a video, a glimpse of the futuristic site on Yumeshima Island that is proposed for Expo 2025 Osaka was given to delegates. A video message from Prime Minister Shinzo Abe was also shown to express his belief in the project and emphasise the role that Japanese technology and expertise can play in contributing to global development.

Building up on the theme, “Designing Future Society for Our Lives”, Ms. Fujita emphasised its potential in achieving the United Nations’ Sustainable Development Goals, telling delegates about the role of cooperation and co-creation in improving lives across the world.

Mr. Rutayisire then told delegates that the “Osaka-Kansai region is the best place to work together to make a better future, respecting individual values and cultures” and that thanks to the skills and technologies he has learnt in Osaka, he will be promoting development in his home country, Rwanda. 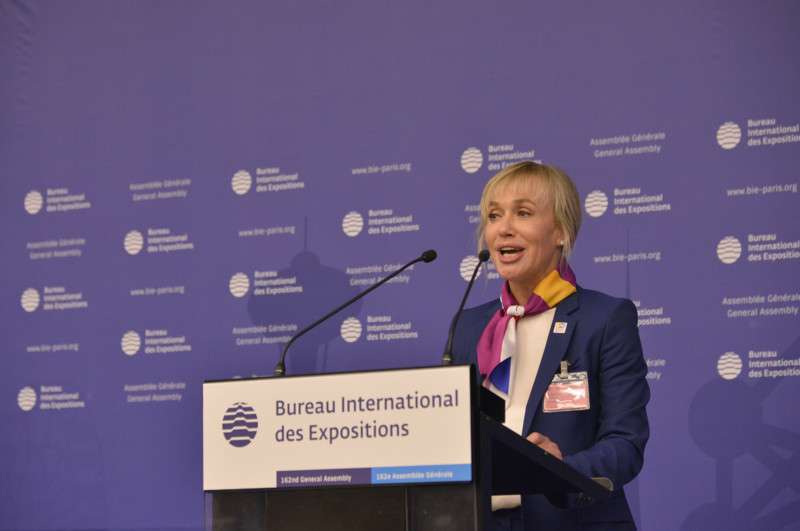 Highlighting the key features of Ekaterinburg, a “modern, dynamic city” that is one of Russia’s cultural and educational hubs, Mr. Manturov emphasised the capacity of the city to organise an event such as a World Expo.

Ekaterinburg “dreams about hosting the Expo”, added Ms. Liepa, while Mr. Pozner stated that hosting an Expo was “a matter of national pride” for Russia.

With a site that would be a “prototype of a future world”, Expo 2025 in Ekaterinburg would showcase technologies that serve “the only goal, the happiness of humankind.” Highlighting the proposed theme, “Changing the World: Innovations and Better Life for Future Generations”, Ms. Sagaydak drew delegates’ attention to the importance of technology as the basis for innovation, and in uniting and simplifying lives, rather than complicating them. 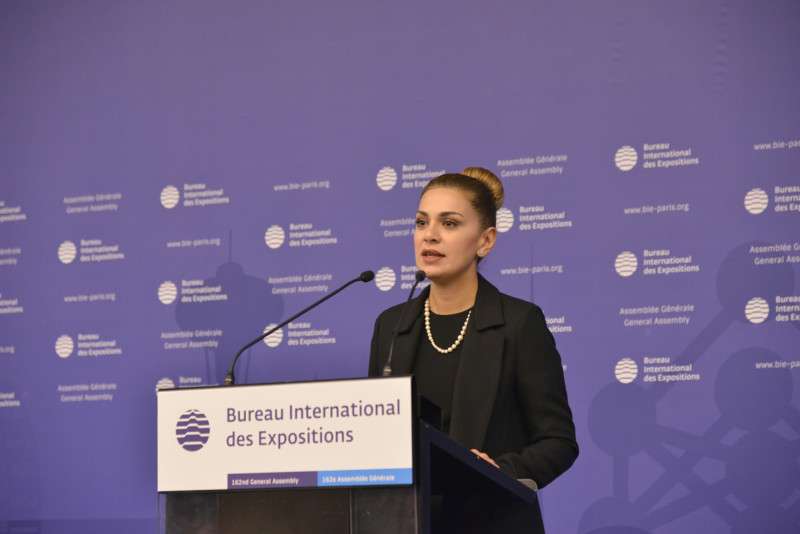 Azerbaijan’s Expo bid was presented by a delegation including the Minister of Finance and Chairman of the Baku Expo 2025 Bid Committee, Samir Sharifov, the head of International Relations of the Bid Committee, Dr. Maryam Garfarzada, and the head of the Expo 2025 Baku Task Force, Elchin Amirbayov.

Delegates were informed about Azerbaijan’s vision for the Expo 2025 site, which would be set between two growing suburbs of Baku. The eight-pointed start shaped area “will be transformed into a major extension of the city with a fully integrated transport infrastructure”, according to Mr. Amirbayov.

With its theme, “Developing Human Capital, Building a Better Future”, focus would be put on the people who drive economies, communities and creativity, according to Dr. Garfarzada, who added that it is essential to “look beyond technology.” Through its three subthemes – Talent, Vitality and Achievement – the Expo would aim to answer questions relating to the UN’s Sustainable Development Goals as the 2030 deadline approaches.

Expo 2025 Baku would besides “capture the diversity of humanity and give all nations the opportunity to participate”, added Mr. Sharifov, who stressed the fact that the bid project enjoys the support of the civil society, the business community, and the Government. 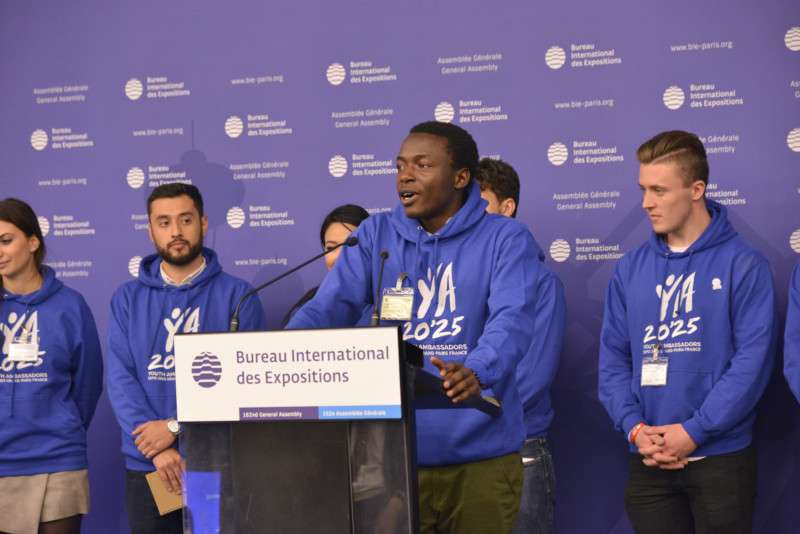 France’s bid project for Expo 2025 was presented by a group of “youth ambassadors” from across the world and by Cédric Villani, a mathematician and French MP.

Drawing on the global interest of France’s Expo bid, young speakers from countries including Morocco, Colombia, the Philippines and Italy told delegates about why they are backing France’s bid, with a notable emphasis on the role given to younger people to help create the future.

France’s vision for the Expo was demonstrated through a video presenting the site with a message that hospitality would be the Expo’s foremost value, driven by the proposed theme “Sharing our Knowledge, Caring for our Planet.” This was further developed by Mr. Villani, who declared that the choice of the site in Saclay, which he represents, reflects the construction of a project “which will be both about the knowledge-based emergence of the future, and about the preservation of our fragile planet.” Mr. Villani added that these two goals should help each other, as “knowledge and new technologies will be used…to help the preservation of the planet.”

Joe Kleimanhttp://wwww.themedreality.com
Raised in San Diego on theme parks, zoos, and IMAX films, InPark's Senior Correspondent Joe Kleiman would expand his childhood loves into two decades as a projectionist and theater director within the giant screen industry. In addition to his work in commercial and museum operations, Joe has volunteered his time to animal husbandry at leading facilities in California and Texas and has played a leading management role for a number of performing arts companies. Joe previously served as News Editor and has remained a contributing author to InPark Magazine since 2011. HIs writing has also appeared in Sound & Communications, LF Examiner, Jim Hill Media, The Planetarian, Behind the Thrills, and MiceChat His blog, ThemedReality.com takes an unconventional look at the attractions industry. Follow on twitter @ThemesRenewed Joe lives in Sacramento, California with his wife, dog, and a ghost.
Share
Facebook
Twitter
Linkedin
Email
Print
WhatsApp
Pinterest
ReddIt
Tumblr
Previous articleWorld expo update: 29 countries sign up for Dubai 2020, Buenos Aires beats Minnesota for 2023, and more from James Ogul
Next articleWärtsilä Joint Venture in China Now Fully Operational