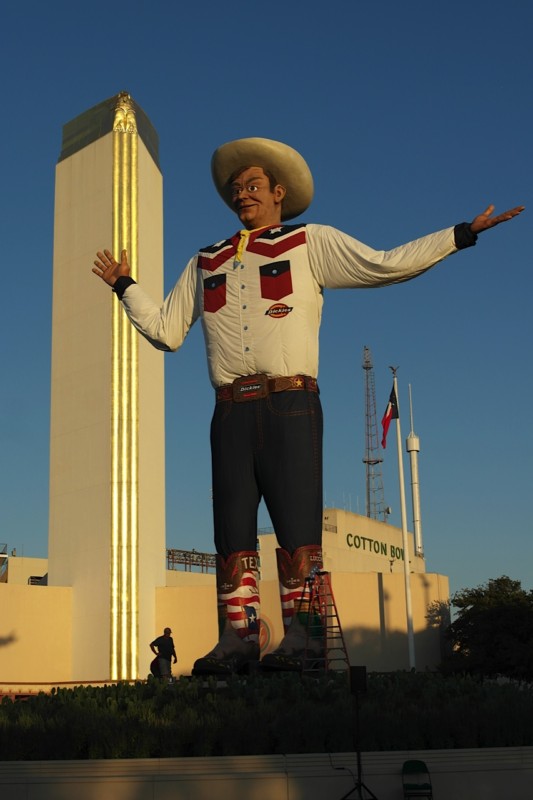 [quote]We needed a scheduler and interface to drive the motors, a very robust system that would run 24/7 and a system that allowed some audio mixing.  That’s how I wound up with Alcorn McBride.” — Louis Bohn, SRO Associates[/quote]

Orlando, FL, USA – A new and improved Big Tex was back welcoming guests to the 2013 State Fair of Texas thanks to SRO Associates and Texas Scenic and the innovative implementation of Alcorn McBride’s V4 Pro frame-accurate controller and AM4 Digital Audio Machine.

The iconic giant cowboy had been greeting fairgoers since 1952 when it was destroyed by fire near the end of last year’s State Fair.  The rebuilt Big Tex was bigger and better than ever tipping the scales at 25,000 pounds and towering over the fairgrounds at 55 feet tall.  He boasted a new red, white and blue outfit and boots decorated with the Texas and American flags, the State Capitol, bluebonnets, longhorns and other Lone Star State imagery.

Big Tex was no static figure.  He waved his hand, turned his head and spoke pointing guests to The Million Dollar Midway and the Texas-size fun and wonders that awaited them.  Over a period of 10 months SRO Associates designed and built the shape and visible parts of Big Tex at its studios in Boerne, Texas and partnered with Texas Scenic in San Antonio to engineer the structure and design the mechanisms that make the giant cowboy come to life.

Key to making Big Tex bigger and better was developing a new control system, says Louis Bohn, Lighting Designer & Technology Project Managerat SRO Associates.  “Before, the control was hydraulic: There was a button panel like you might see on any fairground ride,” he explains.  “But they wanted to add more movement to Big Tex and make those movements more fluid, so we elected to go with large industrial electric motors and a new user interface.”

Bohn had worked with Alcorn McBride on a previous project and turned to the manufacturer for its V4 Pro frame-accurate controller and AM4 Digital Audio Machine, which “really filled the bill” for Big Tex’s audio needs. 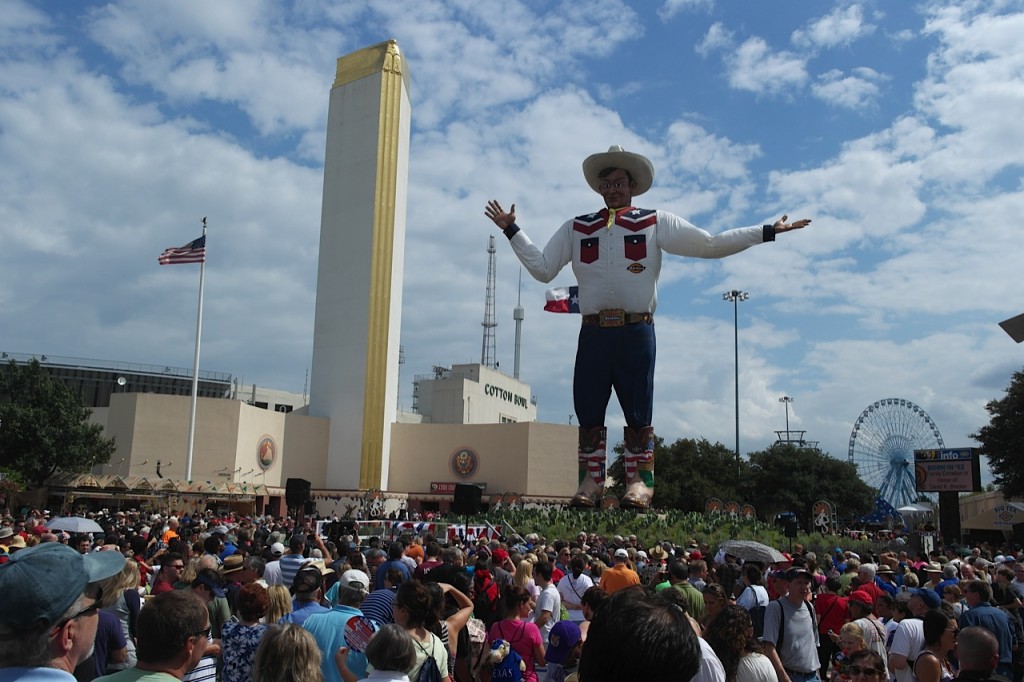 Big Tex’s moving mouth had to function with the live voice of the giant cowboy as well as with prerecorded audio.  “With the prerecorded audio we originally planned to do a timeline of mouth movements to audio.  When we decided to actually interface with audio we had to come up with a system to make it more dynamic,” says Bohn.

With five motors inside the head of Big Tex SRO devised the idea of using a light organ device to take the incoming audio signal and split it into low-, mid- and high-frequency signals and give them a visual orientation.  “We were able to convert that to numbers and go into the V4 Pro controller and apply numbers directly into SEW Eurodrive’s MOVI-PLC (Programmable Logic Controller), which controlled the motors,” Bohn explains.  “We added an audio delay to compensate for the latency of communication.  And everything worked fantastically well.”

He notes that “there was no textbook to reference” for solving the audio needs of the giant cowboy so ingenuity and innovation were essential to deliver his much enhanced audio capabilities.  With the solution SRO developed, “we could analyze the audio and move his mouth accordingly,” Bohn says.  “Based on amplitude, his mouth not only moved at the right time but also differently depending upon the audio.  Big Tex opened his mouth more and gestured more depending upon the live or prerecorded audio.  That way we didn’t have to preprogram the mouth movements for the prerecorded audio, which wouldn’t look the same – or as good – as the live audio.”

Alcorn McBride engineer Joy Burke says the V4 Pro served as the show controller for Big Tex, starting and stopping his performance via the Showtouch software interface from a touch panel.  “The V4 Pro is a very reliable system, rock solid with no chance of downtime.  It easily interfaced with the complex systems involved in this show and communicated with the MOVI-PLC as well as the AM4 audio player,” she says.

Specifically, the V4 Pro sent the MOVI-PLC “appropriate commands and toggle bits to allow it to follow the audio file and tell the PLC when to move Big Tex’s mouth up and down,” Burke explains.  The V4 Pro triggered prerecorded audio tracks with a timeline and audio tailored to particular times of day by reading the audio values and sending commands as needed.  For live audio, when the voice of Big Tex used the microphone the V4 Pro made the figure’s mouth movements coincide.

Bohn says he approached programming Big Tex as a lighting designer, making “individual modules to pull into different sequences.  Any single movement required at least 12 bits of data.  Big Tex had 80 prerecorded messages, and I didn’t want to do all that programming 80 different times.  So the operator simply pressed a single button on the computer to get the whole thing started.”

He reports that Big Tex’s audio “worked really well” and gives kudos to Burke for being “instrumental in helping us line up all these systems.  We all worked together to integrate everything, and Alcorn McBride updated firmware to tailor the system for us.  Alcorn and Joy were phenomenal and very supportive of the project.”

Bohn believes Big Tex may be improved even further by the next State Fair.  “We may add new movements other than his mouth, head and hand.  We’d like to be able to have his forearm move for a much more natural wave.  That will be a big upgrade.”

Joe Kleimanhttp://wwww.themedreality.com
Raised in San Diego on theme parks, zoos, and IMAX films, InPark's Senior Correspondent Joe Kleiman would expand his childhood loves into two decades as a projectionist and theater director within the giant screen industry. In addition to his work in commercial and museum operations, Joe has volunteered his time to animal husbandry at leading facilities in California and Texas and has played a leading management role for a number of performing arts companies. Joe previously served as News Editor and has remained a contributing author to InPark Magazine since 2011. HIs writing has also appeared in Sound & Communications, LF Examiner, Jim Hill Media, The Planetarian, Behind the Thrills, and MiceChat His blog, ThemedReality.com takes an unconventional look at the attractions industry. Follow on twitter @ThemesRenewed Joe lives in Sacramento, California with his wife, dog, and a ghost.
Share
Facebook
Twitter
Linkedin
Email
Print
WhatsApp
Pinterest
ReddIt
Tumblr
Previous article
VIDEO: Behind the Scenes of Aquatica’s New Drop Tower Slides
Next article
Just For Kids Festival Returns to SeaWorld Orlando Starting March 22