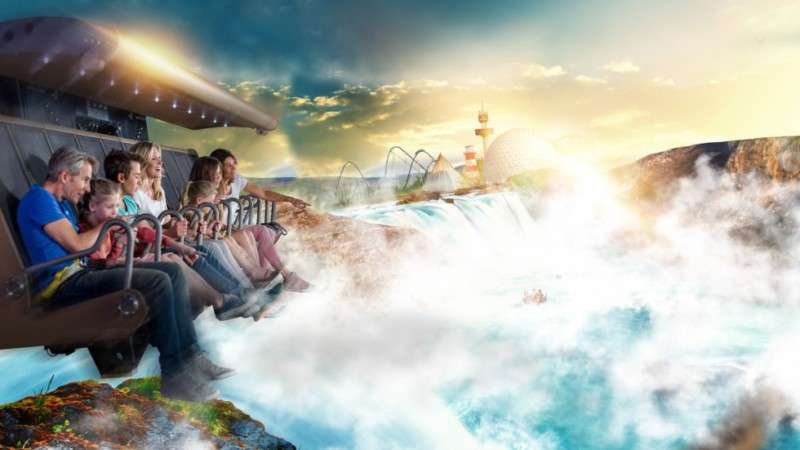 Get ready to take-off in the new grand attraction at Europa-Park – the “Voletarium”, opened June 3. The largest flying theater on the continent takes its passengers on a breathtaking flight across Europe in two theaters and into the fascinating world of flight pioneers Kaspar and Eckbert Eulenstein. The “Voletarium” is the most expensive individual attraction in the history of Germany’s largest leisure park and offers the whole family a spectacular experience for all the senses. In addition, visitors have the opportunity to purchase a timed ticket for the first time, which entitles them to experience the attraction at a fixed time and without a long wait. MackMedia has produced the film, directed by Holger Tappe. The music was played by a 60-piece orchestra.

The fascination of airborne machines has fascinated scientists and the brothers Eulenstein from the very beginning. Sketches, studies, and experiments with which they would one day rise in the air determined their lives. In the “Voletarium”, at the beginning of the 19th century, they did not leave anything behind to make the great childhood dream come true: flight, as free as a bird, at any time and wherever the wind carries one.

Filming experience for all senses

The new attraction allows the visitors to experience the technical achievements of the two flight pioneers. Before the ride is experienced, eleven detailed scenes take passengers to the world of the owl stone in the preshow area and use a talking drone to make a special journey. In seven chairlift-type airplanes, the passengers take flight on three floors through the air in one of the two theaters. On the more than 400 square-meter screens, which have a diameter of 21 meters, shots of Europe’s landscapes and metropolises are admired. Effects such as wind, water and different fragrances give the 140 passengers in the 16 meter high domes a unique flight feeling. 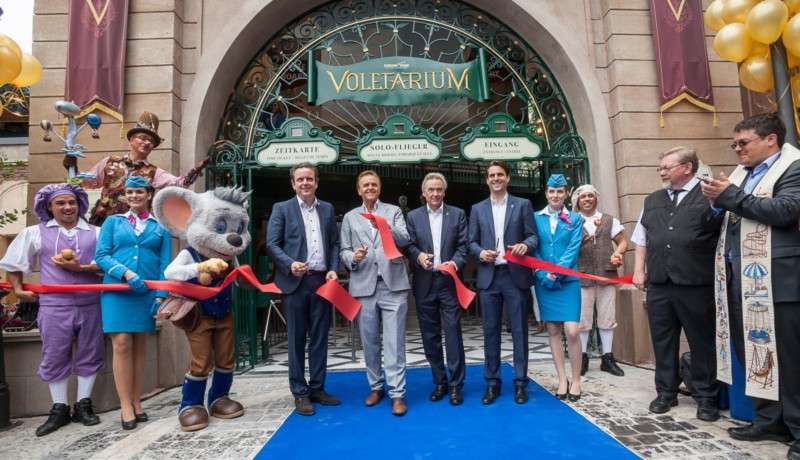 Elaborate productions all over Europe

Under the direction of Holger Tappe, MackMedia has produced images from 15 characteristic locations and venues in Europe. Highly-engineered cameras installed on the helicopter and drone produced images in an resolution of 8K – eight times as high as Full HD. The film, in combination with the corresponding gondola movements as well as other effects, conveys an authentic feeling of flying during the film. Helicopter flights over Venice, where flights have been prohibited since the shooting of James Bond’s “Casino Royale” in 2006, around the Matterhorn, past the Europaparlament in Strasbourg and the fjords in Norway, alongside the Neuschwanstein Castle and, of course, above Europa-Park, give the passengers in the “Voletarium” unique perspectives of these places. The film music was created under the direction of the German composer Kolja Erdmann, who recorded this with the renowned 60-member film orchestra “FAME’S. Macedonian Symphonic Orchestra “. The music intensifies the experience and creates an image and sound composition that is optimally adapted to the images.

“MackMedia is entering a new dimension with this film production, which is the provisional highlight of the 15-year-old media company,” emphasizes Michael Mack, Managing Director of Europa-Park and Managing Director of MackMedia. Roland Mack, owner of Europa-Park, added: “The Voletarium is the most powerful attraction of its kind in Europe. We are sure that with the largest investment in a single attraction in the history of Europa-Park, we will present something absolutely unique to our guests. If you miss this flight, you have missed the weltsensation in the Europa-Park. ”

With the construction of the “Voletarium”, a major restructuring has taken place immediately adjacent to the main entrance of the Europa-Park. The shop in the German Allee has been converted significantly. Additional elements, including “Walters Wurstbude”, a new snack bar, covered seats, lockers, the delivery desk for timed tickets and the lovingly designed inner courtyard of the “Voletariums” have arisen with the new attraction. The authentic flair of the 19th century, reflected in its detailed architecture, puts visitors in the world of the Eulenstein brothers and raises the experience factor of the Europa Park to a new level. The construction period for the “Voletarium” was nine months.

With the “Voletarium” attraction, around 1,000 people from all over the world have worked together from the first idea to the inaugural voyage. The gondolas are from the Taiwanese manufacturer Brogent and are characterized by a dynamic and reliable functionality. The steel for the ride came from Belgium, while the Austrian company Kraftwerk imported the screens from China and cut and installed them on-site. In the two theaters, a highly modern IOSONO sound system from  Barco ensures a perfectly individualized sound quality optimally adjusted to the gondolas.

The “Voletarium” is the first building block of the “Adventure Club of Europe”, within which visitors of Europa-Park will discover and experience many adventures in the future. As part of the opening of the “Voletariums”, a new partnership has been signed with the quality low-cost airline Eurowings. The cost of the attraction is three times the cost of setting up the Europa Park in 1975.

For further information on the new grandeur of Europa-Park, please visit: www.voletarium.de and www.adventure-club.de .

Joe Kleimanhttp://wwww.themedreality.com
Raised in San Diego on theme parks, zoos, and IMAX films, InPark's Senior Correspondent Joe Kleiman would expand his childhood loves into two decades as a projectionist and theater director within the giant screen industry. In addition to his work in commercial and museum operations, Joe has volunteered his time to animal husbandry at leading facilities in California and Texas and has played a leading management role for a number of performing arts companies. Joe previously served as News Editor and has remained a contributing author to InPark Magazine since 2011. HIs writing has also appeared in Sound & Communications, LF Examiner, Jim Hill Media, The Planetarian, Behind the Thrills, and MiceChat His blog, ThemedReality.com takes an unconventional look at the attractions industry. Follow on twitter @ThemesRenewed Joe lives in Sacramento, California with his wife, dog, and a ghost.
Share
Facebook
Twitter
Linkedin
Email
Print
WhatsApp
Pinterest
ReddIt
Tumblr
Previous articleDreamWorks Animation Attraction Headlines 2017/2018 Offerings at Universal Studios Hollywood
Next articleSIGGRAPH 2017 VR Village to Showcase Interactive VR and AR Projects from Around the World