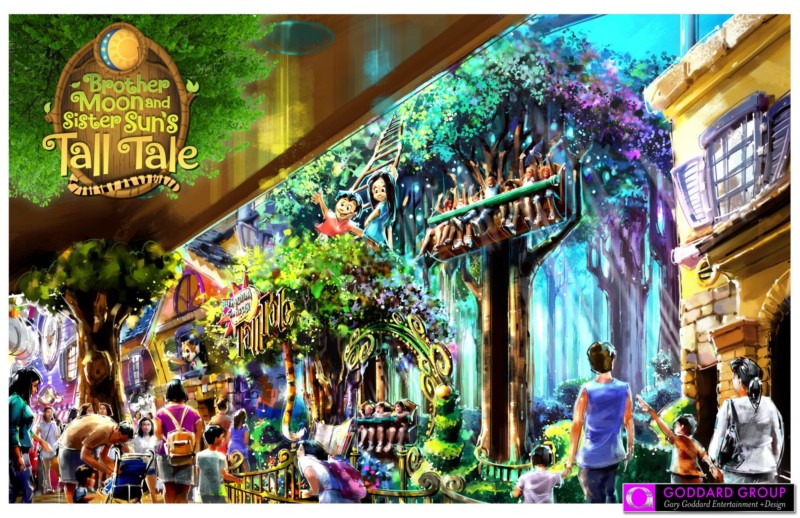 Seoul, Korea – Lotte World’s aggressive expansion continues as this week the park announced their newest addition, a family drop ride called “Brother Moon & Sister Sun’s TALL TALE”, to be designed by Hollywood entertainment design firm the Goddard Group. Hardware for the new attraction is being provided by S&S Worldwide of Utah. The ride is slated to take its first riders in early May.

Based upon a popular Korean fairy tale in which a brother and sister are chased into the sky by a ferocious tiger, riders will experience firsthand the story’s climactic moments as they are dangled and dropped just inches away from the tiger’s reach.

“Tall Tale gives us the chance to let guests step into the world of a beloved local fairy tale, much in the same way we were able to bring the world of the friendly Korean ogres to life in our Underland project” says Taylor Jeffs, Director of Design for the Goddard Group. He adds “In an age where the whole world online, immersing guests in fully-realized fantasy worlds and stories is the one thing the theme park medium can do better than any other.”

To create the unique world of “Tall Tale”, the Goddard Group relied on the talents of longtime collaborators Christopher Smith and Phil Mendez, both formerly key designers at Walt Disney Imagineering. There, the two men helped to create some of the most beloved attractions and characters found at Disney’s theme parks.

Sang Han, Attraction Producer for Lotte World, says of the new ride “Like our other recent attractions, Brother Moon and Sister Sun’s Tall Tale will take immersive storytelling to levels never before seen in Korea. As guests return to Lotte World for our 25th Anniversary in 2014, we know they’ll be thrilled with the incredible arsenal of new top-quality experiences we’ve created for them.”

The popular South Korean theme park has recently enjoyed some of its highest attendance since it opened in 1989, and in turn has been rolling out a number of new attractions in the last few months including the “Jumping Fish” family ride, “Do You Speak Beluga?” interactive theatre, as well as an entirely-new themed zone called “Underland”.

In October 2012, the Lotte World and the Goddard Group announced a strategic creative partnership that would lead to the creation of new lands, attractions, shows, restaurants, and stores. To date, this partnership has resulted in the opening of three new projects, including the Jumping Fish family ride, Do You Speak Beluga? interactive theatre, and Underland themed zone.

Judith Rubin
Judith Rubin ([email protected]) is a leading journalist, publicist, strategist, blogger, content marketing specialist and connector in the international attractions industry. She excels at writing about all aspects of design and technical design, production and project management. Areas of special interest include AV integration and show control, lighting design and acoustics, specialty cinema, digital video and world’s fairs. Judith has ties to numerous industry organizations. From 2005-2020 she ran communications, publications and social media for the Themed Entertainment Association (TEA). In 2013, she was honored with the TEA Service Award. She was development director of IMERSA, and co-chair of the 2014 IMERSA Summit. She was publicist for the Large Format Cinema Association in the 1990s, now part of the Giant Screen Cinema Association (GSCA) and has also contributed to the publications of PLASA, IAAPA and the International Planetarium Society. Already making her mark as a magazine and book editor, Judith joined World’s Fair magazine in 1987, which introduced her to the attractions industry. Launching as a freelancer in the mid 1990s she has contributed to dozens of publications and media outlets including Funworld, Lighting&Sound America, Sound & Communications, Urban Land, The Raconteur and The Planetarian. She joined InPark in 2010. Judith earned a Bachelor of Fine Arts from Pratt Institute. She has lived in New York City and the San Francisco Bay Area, and now makes her home in Saint Louis, where she is active in the local arts and theater community.
Share
Facebook
Twitter
Linkedin
Email
Print
WhatsApp
Pinterest
ReddIt
Tumblr
Previous article
Saint Louis moves forward with Arch grounds revamp
Next article
LASERIUM® Returns to the Saint Louis Science Center’s James S. McDonnell Planetarium